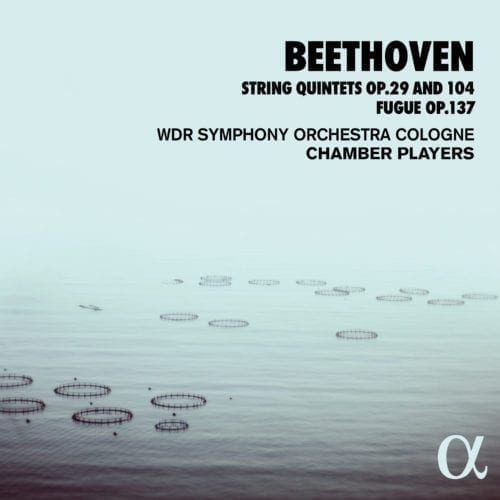 In the year of Beethoven’s 250th birthday, the chamber musicians of the WDR Symphony Orchestra in Cologne celebrate with their third album in tribute to the great German composer. The String Quintets op. 29 (1801) and 104 (1817), as well as a Fugue in D major (1817) for the same type of ensemble, are presented here. This formation, less conventional than the classical string quartet, consists of two violins, two violas and a cello. The addition of a second viola adds an extra layer to the accompaniment, and a roundness of sound provided by its muted textures. The recording’s impressive quality makes it easy to distinguish the individual parts of the five players by ear, allowing an appreciation of Beethoven’s lyrical, bewitching melodies, the ambition of his harmonies – more audacious in his op. 104 – as well as the quality of his writing for the fugue. Indeed, the album closes with a fugue which, as tradition dictates, is a superimposition of independent voices resulting in a horizontal writing. The ensemble stands out for its ability to interpret the two string quintets with the fiery character associated with Beethoven’s music, as well as for the precision and definition of the fast lines that are sometimes given to the different instruments. Offering quality interpretations and flawless playing, this album is an excellent way to discover and become familiar with these lesser-known works of the composer.