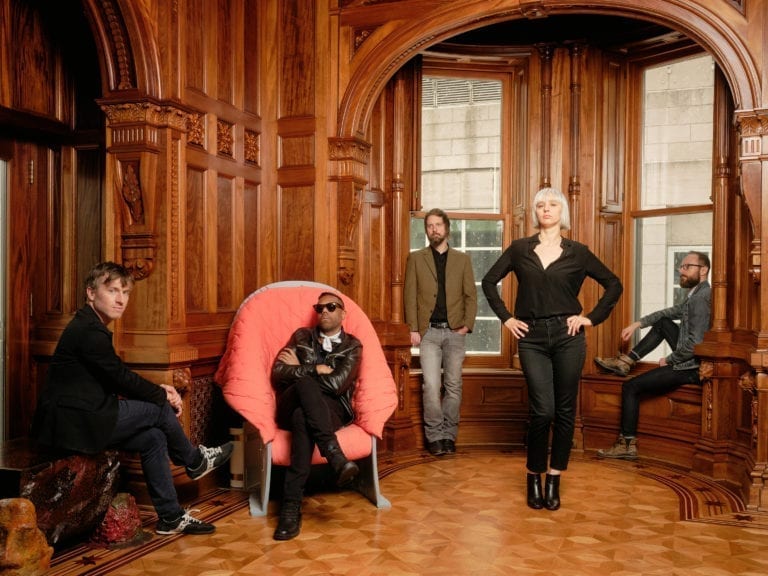 The Dears: The end and afterwards

The veterans of the Montreal indie rock scene have just released Lovers Rock, an album that reflects our current collective state of mind against a backdrop of melancholy chamber pop. Throughout the band’s career, singer and guitarist Murray Lightburn has strived to portray a mysteriously apocalyptic, yet realistic and optimistic perspective. Here he tells PAN M 360 about the genesis of this vision.

To make up for the lack of live performances, many bands find themselves having to independently promote their albums on Instagram. The Dears followed the trend and took the opportunity to broadcast their discography live throughout the past week. A pleasant surprise for fans, who were able to chat with the band and enjoyed Lightburn’s lyrics, which are built to last, a bit like the Biblical stories that inspire him. We spoke with him to better understand what lies behind this desire to remain timeless.

PAN M 360: Lovers rock is a kind of reggae known for its romantic sound and content. Are you a fan of this genre? Does the title refer to it?

Murray Lightburn: When I was a much younger guy, I worked with someone who made me a lovers rock mixtape of all that stuff. I don’t listen to much of it now. Originally, we drew inspiration from those days, but also from The Clash a bit too. In the end, it became something totally different. Lovers Rock, for us, became a fictional place. We could have changed the name of the project altogether but it just sort of stuck.

PAN M 360: Your songs generally give the audience the incredible sense of being heard and understood. How does this benevolence come about during the writing process?

ML: That’s interesting. There isn’t a lot of intention to what we do, aside from very general things like sound and production and concrete things like that. Our work, otherwise, is abstract. We speak in terms that can be interpreted in various ways to apply to anyone who might hopefully get something from it. We take a literary approach to the lyrics. We want them to stand the test of time and hope that, even if people don’t get it now, they’ll get it later.

PAN M 360: From which paintings did you choose the covers of the singles? Do they have a symbolic meaning to you?

ML: I grew up having a depth of knowledge in Bible stories. They creep into songs from time to time. It’s not a religious thing. Some of those stories are very poetic and told using wild imagery that I’m attracted to. For example, I’m somewhat obsessed with Sodom and Gomorrah, and Lot’s wife turning into a pillar of salt. Or the story of Cain and Abel. It’s some wild, wild stuff.

PAN M 360: It seems like the lyrics can be interpreted at different levels, introspection that’s personal or social. What kind of discussions do you hope to start?

ML: On this album, we examine choices that we make. There is a dark path and one guided by light that leads to love. We have to clearly define each path so we know what is clear. We feel that love is something we want to know more about, and so that is what we will always be looking for. We’ve been covering this for 25 years now. It is what we offer.

PAN M 360: The lyrics seem to reflect our current reality and what we are going through. What is your insight about the current changes we have to face individually?

ML: We’ve always sung about this stuff. Challenges are always going to be there. Some are great and universal. Some are very personal. And some are both. You could listen to almost anything in our work and apply it to what is happening now. We are like the boy who cried wolf.

PAN M 360: You said that Lovers Rock is in a way related to No Cities Left, which was written after the events of 9/11. What are the common thoughts that you had during the writing process of these two albums? What are the differences?

ML: People in charge make decisions on our behalf that we have almost no choice but to live with. It sets up a backdrop of constant impending doom. Our approach to doom is now grizzled. It strengthens our resolve. We are determined more than ever to hold each other.

PAN M 360: Your albums have an apocalyptic background for sure. At the same time, they are about love and rebirth, which makes the apocalyptic subject even more tangible or easier to grasp. How has this contrast evolved during the writing process of this album? And in comparison to your previous ones?

ML: I think what it possibly boils down to is this: I don’t take my life for granted. My life could end or the world could end. When that happens I want to be surrounded by people I love and I want them to know that I love them. And so now as I approach 50, I find myself saying “I love you” to a lot of people these days. And I do love them. I really do. Even if they drive me nuts sometimes or we don’t always agree on everything. When push comes to shove, I want to hug them and tell them that I love them and that I’ll be there for them. It’s a genuine feeling that I have inside me. That feeling was not always there. It was taken up by lots of unimportant bullshit.

PAN M 360: What do you think of the evolution of the Montreal music scene since the beginning of your career? Do you know any upcoming band or artist that you would like to talk about?

ML: I’m not really aware of many new bands in Montreal and that is 100 percent my fault, and I’m a little ashamed. I have two kids and maybe go out once a year. But at the same time, the way we find out about bands now is driven much more by bigger international press and stuff like that. When we were coming up, there was a much more robust local network to engage, and to hear about cool upcoming artists. You would come up locally first, then nationally and, if you’re lucky, internationally. There’s barely any of that kind of structure now.