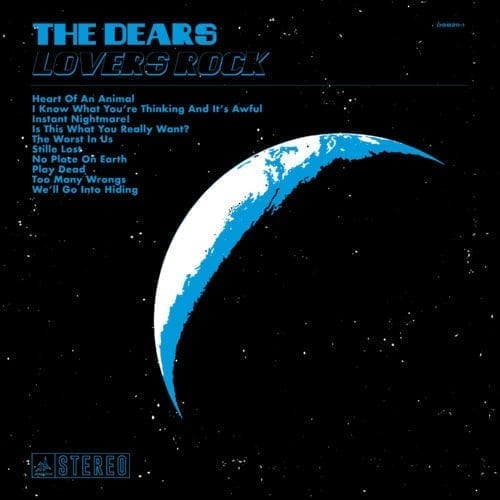 “Something from the outside of this world / Is focused on a wrath / Mercy isn’t coming / Nor is mirth / Beholden to a past / We wanted this to last.” When you compare these lyrics from “Heart of an Animal” to what we’re collectively experiencing right now, you can’t help but feel a chill. Singer Murray Lightburn is no fortune teller, but one can’t remain insensitive to the disturbing, apocalyptic setting of the Dears’ new album, which is starting to become strangely real. Influenced by the Smiths’ Britpop romanticism and The Divine Comedy’s orchestrations, the band talks about the end of the world with as much poetry and darkness as Serge Gainsbourg (adding a bit of philanthropy to the whole). Assembled in 1995 around the couple formed by guitarist Murray Lightburn and keyboardist Natalia Yanchak, the collective now has eight albums to its credit and a nomination for the 2011 Polaris Prize for Degeneration Street. In 2017, they released the album Times Infinity, released in two volumes and built like a puzzle. Lovers Rock shares an atmosphere similar to that of the superb No Cities Left from 2003. Lightburn compares the current period to the post-9/11 moment. First comes shock and paralysis (“Instant Nightmare!”), then a feeling of powerlessness in front of a situation that’s beyond us (“Stille Lost”, “No Place On Earth”). There’s nothing defeatist about this album, however, as its lyrical arrangements give us a glimpse of the light at the end of the tunnel. Even if a rebirth seems far away, Lightburn helps us to imagine it on the ballads “Play Dead” and “Too Many Wrongs”. Rather than shutting ourselves up in a destructive past or an uncertain future, the Dears’ album perhaps offers a third option: facing the fear of living in the present.