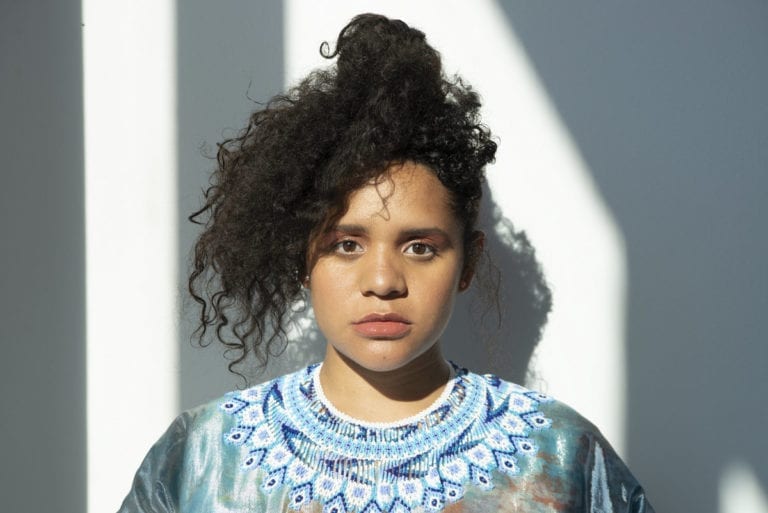 African, Indigenous, Caucasian, and Colombian roots. Pan-American migration, Canadian destination. Performer, singer, lyricist, composer, producer, visual artist, director, mother, spouse. Clearly, Toronto’s Lido Pimienta is an embodiment of the three Americas. Winner of the Polaris Prize for the album La Papessa, this very strong and gifted woman carries so many strains within her, and these transcultural materials form the framework of the edifice that is Miss Colombia. Recently released on the Anti- label, this album could well be the beginning of a new level in her career.

From La Papessa to the excellent Miss Colombia, Lido Pimienta describes a “long and necessary” journey:

“La Papessa is my music school and also my music industry school, my music school in general. I learned how to record myself, how to orchestrate my songs, etcetera. Those tools are very useful for the next steps, and led me to this album. All those new skills that all gathered, and also the patience that it takes to do something of quality.”

Although La Papessa won her the Polaris in 2017, Pimienta believes that her debut album was just a starting point.

“When I started recording myself in La Papessa, I didn’t really know what I was doing. I felt that I just had to put something out fast. Mainly because I just wanted it out and I got a grant for it, and I didn’t really care about the details. So I was anxious to get started with Miss Colombia, I wanted to achieve something of high quality. That’s where the two albums are different and that’s where each project supported one another.”

The artist points out that Miss Colombia required a lot of patience and discipline and, above all, relied on “fewer cooks in the kitchen”.

“That’s the biggest lesson from La Papessa. A lot of people involved, a lot of opinions, a lot of stress not needed. With Miss Colombia, I truly listened to my own voice. If there were too many opinions on something, I would tell them to fuck off (laughs).”

A multimedia performer halfway between pop culture and avant-garde, Pimienta is a complete artist, music is only a part of her universe… and she intends to keep it that way.

“I’m very lucky because I’m able to do a lot of things, so why not you show them off. I paid more attention to the quality of the music. I’m more focused on music but the visual aspect remains as important. I think this is a whole. I tried to bring both my visual art and my music. It was important for me to package my music in a way that makes sense and most importantly that is true to myself. I write all my storyboards, I write all my treatments, I do every single drawing and I collaborate with people that I know that would be the perfect fit for my vision.  I’m making sure that my music goes to the next level. I’m basically thinking about the next album and taking steps too. I’m obsessed with making something even more beautiful for the next album.”

The process of creating Miss Colombia began in 2015, first in Chile and then in Nova Scotia.

“First, I went  to Santiago de Chile and I worked with my friend Andrés Nusser. We did a bit of record engineering, working the voice, making sure that I knew how I was going to mix it.  And then I went on tour again, and then I went to Halifax to do these wind instrument demos – clarinet, flute, trumpet – that I made with Robert Drisdelle and his colleagues.”

Pimienta then completed the work with Prince Nifty.

“I’ve always wanted to work with him. He’s the best producer for me. He’s very good at experimental music, he understands the production and interpretation sides of my work perfectly. So I went to his place, showed him some demos, and we talked at length. Then we built a studio in Toronto, where we worked for about seven months. Our sessions were many sessions, short and intense. Nifty and I had a domestic relationship throughout this work, and I gave birth to my second child during that time. I was breastfeeding while recording! We were able to grow up with the new songs in an intimate setting. It was a relaxed atmosphere, even though there were a lot of difficult questions to answer.”

Miss Colombia was finally finished in her homeland. The title of the album is an ironic nod to the Miss Universe award that was wrongly given to Miss Colombia, who made headlines in 2015.

“We had all the songs, but I also wanted traditional Afro-Colombian music to find its place on the album. Before emigrating to Canada, I was very much influenced by the music of the Palenque region in the Bolivar province – where Cartagena is located, more precisely, on the Caribbean coast. So I worked with the Sexteto Tabalà ensemble. It was wonderful because we weren’t confined to a studio, we could hear cars going by, children, horses. I became friends with these musicians, and we have other plans for the future.”

Pimienta, it must be said, is a universe in herself. She’s fully aware of this, and works with her composite culture:

“Cumbia, porro or champeta are only a part of me. I am African and indigenous, I’m a mixture of slaves and slave owners. I am everything that comes from Colombia. It seems natural to me to express it, without even intending to explore it. I’m also the result of my own migration. I found my home in Canada, I had my two children – 12 and one year old – my partner is also a child of immigrants. I feel at ease in Canada, every day I understand more and more this culture which reveals sometimes surprising things to me, especially about the indigenous, the francophones and the cultural communities.”

What about the Polaris 2017? Not an unqualified win, the main interested party recalls…

“There was a lot of negative reaction when I received the award. On social media, people said I wasn’t really Canadian and I didn’t sing in English.  It’s a shame, because this diversity of languages in Canada is an opportunity to enrich our culture. Artists like me are the culture of Canada today. You know, I tried to write things in English, but it didn’t sound good. Maybe if I wrote in French or Portuguese, it would work…”

Pimienta succeeded in dropping a vindicating opus three years later, an eloquent demonstration of her immense talent and long-term viability.

“Yes, Miss Colombia is getting very good reviews everywhere, hopefully this will mean more shows and more income for my family. I would be thrilled if I could give my children a home. Otherwise, I am very happy with my business partners, my colleagues, my family. I have very specific ideas for my next show, I want people to feel like they are in another world.  Finally, I know exactly where I’m going for my next album. I want it all to be beautiful!  I want to offer songs that will make people cry. I’ll stop at nothing to do that!”