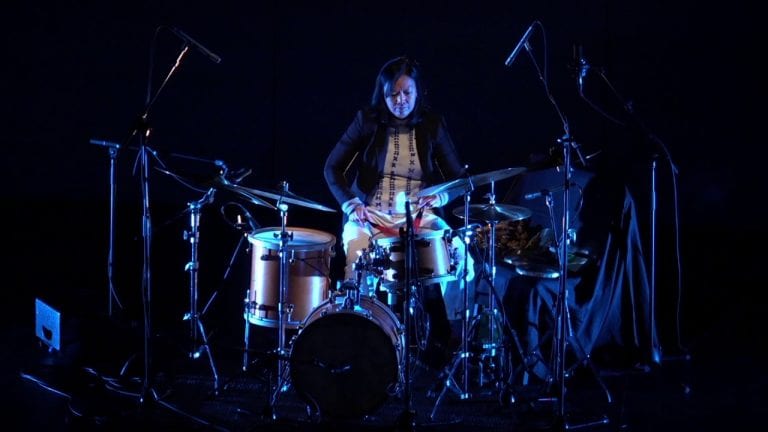 The Suoni per il popolo festival in Montreal proposes this year its own in-house mini-festival called Undrum. It’s about everything and everyone that uses new and surprising ways of playing the drum kit. Great names are giving this new kid on the festival block some already very solid credentials as an event to be considered seriously : Susie Ibarra, Glenn Kotche, Michel Langevin (Voivod) and many others. Ongoing at Suoni : next show hits the stage this Sunday!

I’ve met with Ben Reimer, drummer and initiator of this new festival.

Pan M 360 : Hello Ben! How did you come up with this great idea for a concert series?

Ben Reimer : well, it was years in the making, at least in my mind! Since I am a drummer and also a member of Architek percussion group, I am well aware of the possibilities of drums in avant-garde and contemporary music, added to those in jazz, improv, metal, pop, rock and so on. I am a fan of all kinds of music, big range. So I wanted to bring together all those great people, musicians and thinkers of new music, that use the drum kit in innovative ways and contribute to ‘’undo’’ the usual ways of playing the instrument and shake the public’s conventional idea of music making with drums.

So with the help of my friends at Architek and also Peter (Burton) from Suoni per il popolo, everything was put in place this year to inaugurate this series within the festival and we called it Undrum, for obvious reasons! I am aware there are a lot of drum fests already out there (right here in Montreal, there is a very good one!), and they’re great, but I wanted to showcase styles and musical ideas that are less well represented in these gatherings, individual voices that express themselves in unconventional ways through drum kit playing. That’s the goal.

Ben Reimer : LOL! Well, I haven’t done a piece for 100 drums yet, so, I don’t know… But hey, just for the principle of it, that would be an honor! And that wouldn’t be so far from the truth. I have my (drumming) hands in art and vernacular music-making, be it metal and rock, and also contemporary opera and drum kit concertos, which I have done! The difference is that I do not compose. I play others’ music, and I like it that way. I love the relationship I develop with composers (like Nicole Lizée for example). That’s my thing.

Pan M 360 : Can you drive us through some of the shows coming next in the series?

Ben Reimer : Sure! This Sunday is Part 2, and it starts with Greg Harrison from Toronto. Great artist, also associated with Jeremy Dutcher. He plays these wonderful grooves where he doubles as a synth player while drumming! Some very ambient, accessible atmospheres mixing delicate drum kit with entrancing bass lines. That’s something to look for.

Then there’s Montreal’s Mili Hong who is well versed in beautiful straight ahead jazz, but here will dazzle with incredible free improv, with purely acoustic drum kit. She knows how to invent great textures with her instrument.

Ian Chang from Sun Lux will also be there. He is like a one man DJ-orchestra! Drumming and also triggering all kinds of sound effects with simultaneous electronics. It’s shocking to hear what can come from a single person on a stage!

Jason Tait will entertain a second set. He comes from The Weakerthans, from Winnipeg.

Pan M 360 : And later on in the month, legendary names will be in town : Susie Ibarra, from Tzadik/John Zorn fame and also Glenn Kotche from Wilco! Was it difficult to bring them along ?

Ben Reimer : No, not at all! I was introduced to Glenn via David Cossin from Bang on a Can in New York, with whom I collaborated on some work by Lukas Ligeti (drummer and son of the famous composer Györgi Ligeti!). Glenn did some lectures for my students at McGill. Like me, he is part of the ‘’popular’’ and ‘’classical’’ worlds. I never met Susie, but I know about her work, of course, and she has an idea of my own, so there is a lot of respect. She also is a wonderful lecturer, researcher and scholar of her instrument. I can’t wait to hear them and see the public’s reaction to their incredible playing.

They are wonderful and very generous individuals. So, no, it wasn’t difficult at all to bring them to the roster.

Pan M 360 : What’s the state of the drum kit as a popular instrument, considering that nowadays, popular and far reaching radio, tv and digital waves have been taken over by rap and hip hop, where the drums aren’t a usual feature?

Ben Reimer : Oh, that is a massive question! It depends if you’re a scholar, a teacher or a player. But I’d say that for sure it’s a different landscape out there from 20 or 50 years ago. I meet some students that have a surprising lack of knowledge of the historical figures of the instrument, and rock music! That being said, they are curious, and once there in the game, they come up with questions about Keith Moon and so on, so then we talk and discuss and they drink it, you know. And, as much as the internet can be a pain, it can also be a way for them to listen and discover lots and lots of things that we didn’t have access to decades ago. So, we have to tamper a bit the idea of lack of knowledge.

That being said, there is a new brand of young drummers arriving with academic and literate credentials. They come from university programs, like McGill in jazz, and they are very well trained and hungry for originality. I’d love to see more classical programs also giving space to the knowledge of drums, and the possibilities of this instrument in a more avant-garde context. But things are evolving. I gave lectures on drum history to classical percussion students. So things are changing.

Ben Reimer : I think we’re getting there! You know, with pioneering work and advocacy done in the last 25 years or so by ensembles like Bang on a Can, Alarm Will Sound, or right here by Architek, mentalities are going in the right direction, I’d say. But there is still some separation.

Pan M 360 : What artists are blowing up your mind these days?

Ben Reimer : Oh, many, many! All those at Undrum, of course, but also some recent metal drumming. There are incredible drummers out there. So I get inspiration from them, I practice and I even get some new music based on that from Nicole Lizée!

Pan M 360 : What does the drum kit brings to music-making that other percussion instruments don’t?

Ben Reimer : Technically, you have the option of having four things happening at the same time, so it creates a multi-limbed independance which is at the core of what makes a drum kit performance. And also, what I love about it, is the fact that you have all those great individuals, creating their own personal sound world but all tied in with the 100 year-history and knowledge of this instrument. It’s all tied-in with the politics and social fabric of the last 100 years! Yeah. And, best thing, in my mind : you can create such great grooves with it! That’s the beauty of the drum kit : playing it makes people wanna get up and dance!

Ben Reimer : Thanks to you!