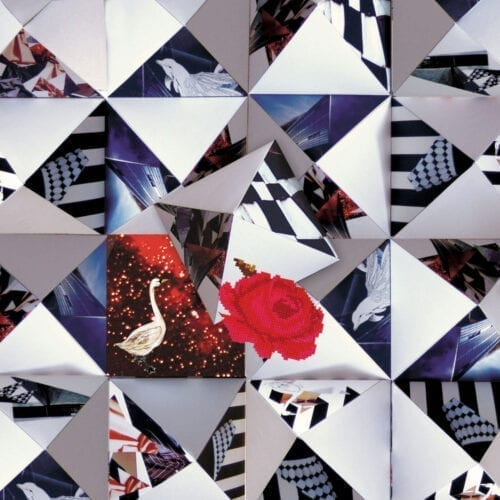 Following deep dives into the funky recesses of lost psych sounds from the ’60s and ’70s (between new releases from currently active bands), Jakarta’s La Munai label has excavated some outstanding Indonesian pop music of a more recent vintage.

Founded in 2003, Jakarta’s Santamonica was – or maybe is, we’ll see… – the duo of musician Joseph Iyup, just back from studies in Germany at the time, and singer Anindita Saryuf, who as fashion director for ELLE Indonesia, supplemented Iyup’s savvy sonic craftsmanship with a sense of style and flair (and whispery vocals of great charm). Together, the married couple created an amalgam of the refined, retrofuturistic, studio-oriented indie pop of the moment, borrowing elements of krautrock, the prettier side of psychedelia, Japan’s effusive Shibuya-kei scene (the formal predecessor to so much J-pop now), the lounge revival, bossa nova, shoegaze, and idiosyncratic French electro-pop. Odd time signatures abound, as do horns and vibraphone.

The expanded reissue of 2008’s Curiouser and Curiouser includes the albums’s original 10 songs, followed by eight new pieces not found there or on their 2005 EP 189, and a new remix of “Wanderlust”. The song is arguably the flagship track of the original album, and as good a statement of purpose as any from Santamonica. That said, “Ribbons and Tie” is a gentle but unshakable bit of sunshine, and “Paper Dolls” is among the bolder and bouncier tunes here. For a clearer picture, check out their videos for the songs here, here, and here.

It’s a shame Santamonica never gained the global visibility of other acts following in the footsteps of Stereolab, such as Broadcast, Electrelane, or The High Llamas. With luck, though, this bounteous batch of sweet, smart sounds will find them many new and sympathetic ears to compensate.