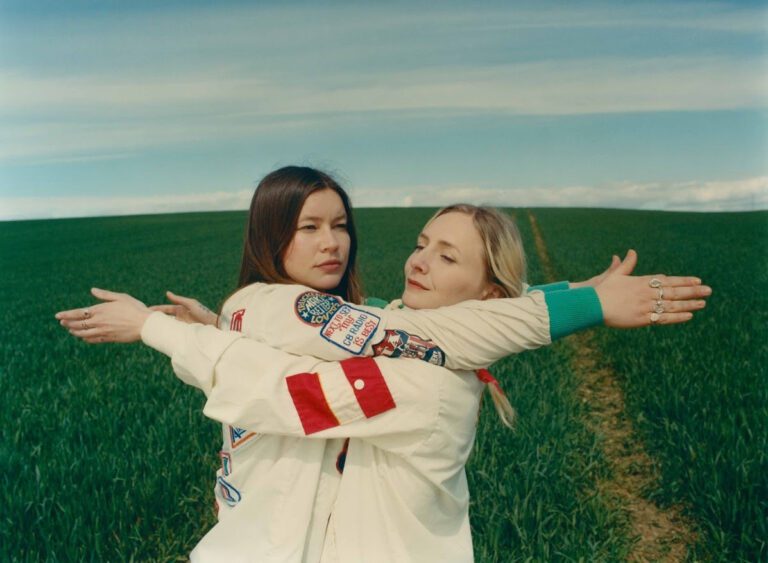 Wet Leg gets its kicks

Before this 3.17 minutes of pure contagious happiness that collected millions of views and listens, nobody had heard of this duo out of nowhere. Well, not quite out of nowhere, since the two main protagonists of Wet Leg come from the Isle of Wight, off the coast of Albion.

If many thought that the success of “Chaise Longue” would be short-lived and that Wet Leg would be just another one-hit-wonder, we have to admit that the duo was quite inspired when creating the twelve tracks of this first album, simply entitled Wet Leg, and unveiled just recently. Buoyed by the resounding success of “Chaise Longue,” Rhian Teasdale and Hester Chambers have seen their little island lives turned upside down, becoming overnight darlings of the music press, with all the hype that comes with it.

A few weeks ago, PAN M 360 managed to catch the two accomplishments while one was on her island and the other was in London. They wanted to do the interview together. Mischievous, mocking, not very talkative but often giggling, Rhian and Hester told us about their homeland, wet legs, the fun they want to continue having while making music, and the weight of success.

PAN M 360: When and how did the Wet Leg adventure begin?

Hester Chambers: In 2018, at the End of The Road festival. Rhian had her solo project RHAIN that wasn’t motivating her too much anymore, and she was about to give up. But for a few festival dates she had already agreed to do, she asked me to play guitar with her. To our surprise, things were going pretty well between us and it was after that show at the End of The Road that we seriously talked about forming a band. We also more or less participated in a few projects together but it wasn’t our project. You know, sometimes you have good intentions and decide to form a new project but then everyone is too busy with other things or it’s hard to find a place where everyone can rehearse and blah blah blah, but we stuck with it!

Rhian Teasdale: Yeah, it’s pretty crazy that we managed to do it (shy laugh)

Rhian Teasdale: Yeah, we’ve known each other for a while. We met when we were in college, but we never really thought about starting a band together until about a decade ago.

PAN M 360: Basically, Wet Leg was more of a project that you started with the sole intention of having fun without complicating your life. But with all your success and all that it implies, is it still the case?

Rhian Teasdale: Yes, but we’re really busy, we work a lot Hester and I. It’s pretty crazy. We never thought about doing this very seriously, we started Wet Leg just for the fun of making music together, really. A few months ago, I was telling Hester that I had to go to work on our project after the vacation, and it felt weird to call it “work.”

Hester Chambers: Oh yes, so much! For a long time it was just a hobby for us. It was after we got signed by Domino’s that we started calling it “work”… It felt weird to say that. Because we never thought of it as a job, we were just hanging
out.

PAN M 360: Music and work are not words that go together very well, are they?

Rhian Teasdale: I think calling it work, a job or a career is weird. It feels really strange to call it that.

PAN M 360: What does Wet Leg mean, is it a typical Isle of Wight expression?

Hester Chambers: Yes, it’s a local epithet to describe those who are not from the Isle of Wight. People who have crossed the Solent (the inlet that separates the Isle of Wight from England) to get to the island are said to have wet legs when they get off the boat. We’re surrounded by water so no matter where you go on the island, you’ll often get your feet wet.

Rhian Teasdale: We thought about naming the band Wet Egg, but we thought Leg would be more relatable, more understood by most people.

PAN M 360: You were both born and raised on the island?

Hester Chambers: No, we weren’t born on the island, but we’ve spent a lot of our lives there since we were little.

PAN M 360: There are several well-known musicians from the Isle of Wight, for example, The Bees, Get Shakes, Mark King from Level 42/Re-Flex, Dick Taylor from Pretty Things (and briefly from the Rolling Stones), David Steele from English Beat/Fine Young Cannibals, the drummer from Hanoi Rocks, and many others. Can we say that there is a pretty dynamic music scene on the island?

Hester Chambers: We love The Bees! Yes, it’s a really creative place. There are so many bands and artists that come from there. There’s always a show somewhere although there aren’t really any cool venues. There’s only one really (chuckles). We’ve been playing here and there on the island since we were 17 or 18. In fact, I would say we’ve spent a lot of our time playing all over the island.

PAN M 360: I imagine there are fewer distractions than in London for example; you have quite a bit of time to rehearse and perform. And then there is always the famous Isle of Wight Festival…

Hester Chambers: Yes, but it’s quite different now. It’s nothing like it was in the ’70s. When we were younger, it was really something to look forward to at the beginning of the summer. Just running around and seeing really cool bands… We’re really lucky to have been able to experience that. And then there was the Bestival too.

PAN M 360 : You recorded Wet Leg in April 2021 but the album was only released on April 8, a year later. Why did you wait so long, especially after the enormous success of “Chaise Longue.” This song was still released last June.

Hester Chambers : We didn’t have much to do during the pandemic, so we were trying to be productive, to maximize our time. And it was quite a long process afterward. We didn’t finish everything last spring, there was the mix that took some time. And we didn’t really know how things were going to turn out after “Chaise Longue.”

PAN M 360 : Tell us about this chaise lounge. Is that what you call those beach or pool chairs?

Rhian Teasdale: I know in French it’s like beach chairs, but in English, a chaise longue is what you call a récamier.

Hester Chambers: We were hanging out in a living room and Joshua (Omead Mobaraki, one of the three musicians in the band) put out a nice beat from his machines, we added a bass line, it was just a little stupid jam and during that time Rhian was sitting on a chaise longue.”

Rhian Teasdale: It was quite an accidental jam and it was never meant to go any further than that.

PAN M 360: You have accumulated more than 11 million views on Youtube with your six clips (3.9 million only for Chaise Longue) and the number of streams is close to 50 million…Does all this overtake you a little bit, do you feel a certain pressure?

Rhian Teasdale: Hmm… That’s a little too much, isn’t it? Personally, I try not to think about it too much and focus my energy on the good things people tell us. I don’t know… um… but it’s true that there’s a lot of hype (laughs).

PAN M 360: Do you feel that there is a strong expectation from the public, that they expect you to live up to all this hype?

Rhian Teasdale : We’ll see, we do what we have to do and que sera sera !