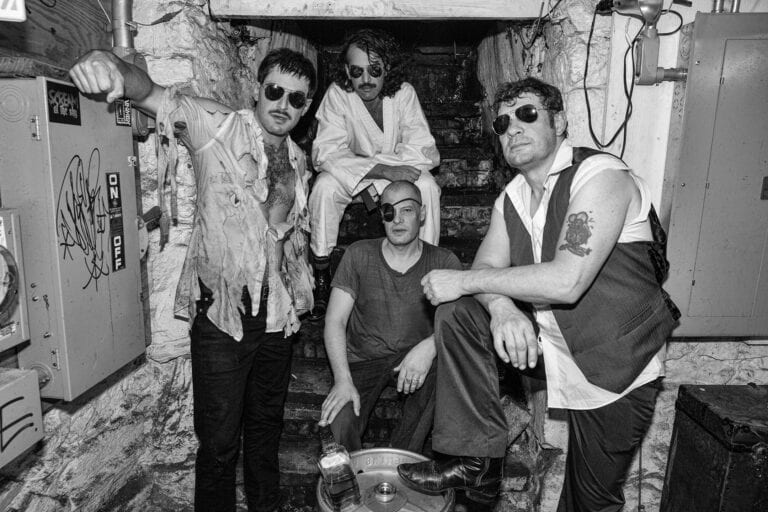 The Spits: Short and sweet

The Spits resurface with the album VI and, once again, keep things loud, fast, and dirty!

It’s with a rather worried Lance Phelps that we spoke the day after the American presidential elections. The drummer of the Kalamazoo, Michigan band The Spits didn’t hide his distress at the unsettled situation in that key state, where numerous extreme right-wing militias lurk, armed to the teeth. Rather than holding his breath while waiting for the official results, he talked about VI, The Spits’ new album released nine years after their previous one, V. The 10 songs on VI, most of them under two minutes long, are a panoply of pleasure, pure, dirty, lo-fi punk-rock in the vein of what the band has always done since their debut on record in 2000. Produced by the prolific and versatile Erik Nervous on a simple four-track, VI proves in just 17 short minutes that no, The Spits haven’t changed one iota… and no one will complain.

PAN M 360: Well, first of all, is this really your sixth album? There are more than that on some pages about you.

Lance Phelps: It’s probably more like the eighth, really. If you count 19 Million A.C., which was a bunch of singles and stuff that hadn’t been widely released, and also Kill The Kool, which is also the same format… so if you add those two, it could be the eighth album! Those two have names and the others have numbers, so VI is the sixth.

PAN M 360: VI is your first full-length studio album in nine years. Why did it take so long?

LP: To be frank, everytime I leave the band no songs get recorded. A couple of years ago, Erin (Wood) and I started talking about a new Spits record. He wanted to know if I would be interested in working with him again. I said I was, so we started trying to work on it and get some material together. It wasn’t going very well and we took a little break, and later came back at it and then things seemed to come together. But Shawn and his brother Erin have a difficult working relationship (laughs). Maybe I’m saying too much, but they have a hard time getting along, so my job over the years has always been some sort of intermediary between the two of them, to smooth things out. They have a hard time getting things done, just the two of them, too many differences. It doesn’t take them very long to start fighting if you leave them in a room together. It’s kind of a cliché. Anyway… At least we got together and we were able to accomplish something and we’re actually very happy with how it turned out. So far the feedback seems to be very positive, it’s selling very well [at the time of writing, the album is out of stock, a few days after its release]. It’s like a shot in the arm because now we have a couple of ideas as far as putting out a couple of EPs, some shorter releases in the next year. So we’ll do our little spurt of creativity and probably all scatter to the winds again.

PAN M 360: I read that you recorded this record in a basement. So where and how exactly did you make VI?

LP: Normally our records are recorded over months and they’re never recorded completely in one place. So we’ll go to two or three different studios, but this is the first album that we recorded 100 percent ourselves in Erin’s basement in Michigan. It was pretty much a DIY labour of love.

PAN M 360: But didn’t you record it with Erik Nervous?

LP: We started recording before he came into the picture. Erik is 30 years younger than the rest of us and pretty tech savvy, especially compared to us. So having him there to command, and press buttons and all the technical side of stuff was super helpful, and we get along well. Sometimes, when you go into a studio and you go to really established engineers, they want to put their stamp on it, but we didn’t have to deal with that at all. Erik is a talented kid, he knows a lot about computers and software and recording. So even though we weren’t using big, state of the art, 64-track recordings boards and stuff, we don’t need so many overdubs anyway. It’s a new era, I don’t think bands need to use these middlemen anymore. There’s so much software stuff available for recording that you can learn by yourself to use these devices. I’m not saying you’re gonna be Phil Spector at the end of the week, but our needs are not that sophisticated, you know.

PAN M 360: Do you always record with such limited means?

LP: No, we’ve worked with some really good producers in some really good studios. But we would always try to find a studio that still recorded on two-inch tape, and used a lot of analog stuff. But for that one, I really insisted on recording it ourselves, I didn’t wanna go in a studio. So that was something I had to negotiate because nobody really believed that we could pull it off ourselves.

PAN M 360: It’s clear that the production of your records is something very important to you. You have your own sound and style that seem to have worked well from one record to the next. It’s pretty impressive. So how do you get such a distinctive sound?

LP: I think that just like anybody else, we’re standing on the shoulders of giants. We have our influences, our tastes, so it’s simply a matter of what sounds good to our ears. So if things are too clean, if guitars don’t have enough distortion or they sound cheesy or overproduced, it’s not what we’re looking for. It’s really a song-by-song thing, how we want it to sound, trying to dial in the sound we have in our heads. But it always comes out to be the same thing: kind of muddy, shitty sounding (laughs). I guess that’s our signature sound!

PAN M 360: In the press release for VI, it says that the group’s returning to its roots. It’s a bit strange because it seems to me that you have never strayed very far from your sources, have you?

LP: I don’t think we could even if we tried. I think we said that in an interview a year or two ago. Maybe that was the intention that we had, but once you go down the path of actually writing and recording songs, they kind of turn into whatever they turn into. We may have intended to go back to our roots, whatever that means. But this is what we ended up with and we’ll just leave it to the audience to decide. It’s very hard to write and to play in any style that’s not your natural voice. Every time we try to do something that’s outside of the box, it still ends up sounding like us anyway, so I don’t know why we bother.

PAN M 360: With all the social unrest you’ve experienced in the United States, your dangerous president and the pandemic affecting us all, would you say that the year 2020 is a punk year?

LP: We’ve been writing songs about the decline of civilization since we started, it’s kind of our schtick. I think it’s punk in a dystopian way, but it’s not very punk as far as having fun. If it’s punk, the punk revolution doesn’t seem to be getting much traction. I wish it was more of a punk year. I wish they were storming the White House and dragging the president out across the yard, that would be punk. What I see in America is not such a punk year. The worst traits of the American people are on display. It’s now been normalized to show what a racist, sexist, bigoted, ignorant piece of shit you are, and to take pride and wave that flag for everybody to see. Hopefully there’s going to be more people and artists being punk and being more vocal, organized, and fighting back against this sickening trend. I’m getting to a point in life, and I think we all are, where it’s very hard to figure out what punk is, or if it’s even a thing, you know?