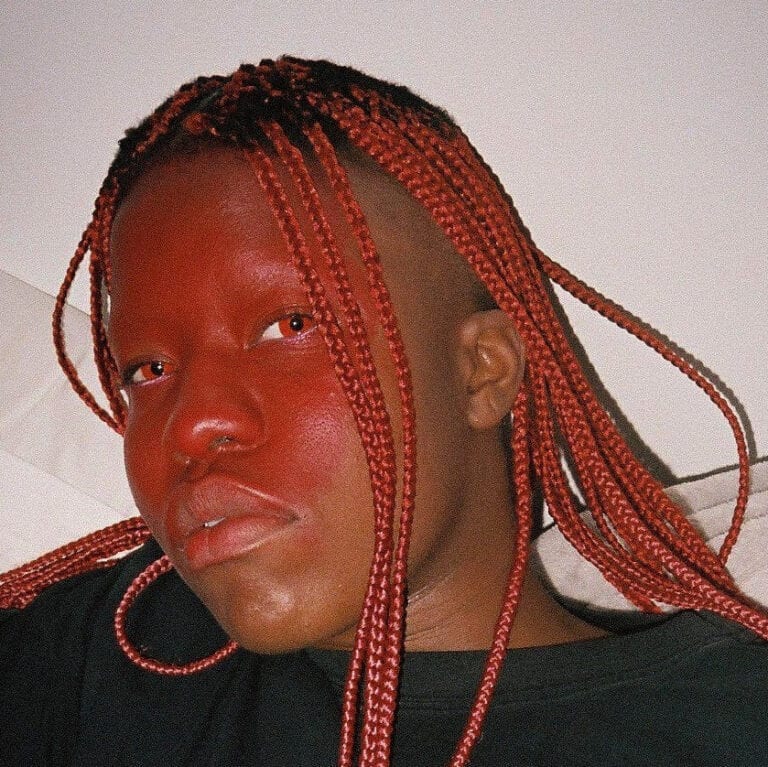 A fan of noise and industrial techno, Tati au Miel emerges at MUTEK, a major stage for the start of a career that promises to be seismic.

Haitian heritage, bilingual Montreal culture, strong interests in experimental music and fashion design, sexual fluidity… From adolescence to adulthood, Tania Daniel gradually became a Tati au Miel, and the 23-year-old artist is about to pulverize all the stereotypes in her path, and contribute to the actualization of black identity.

PAN M 360: Let’s start at the beginning, with a summary of your journey.

TATI AU MIEL: My family is Haitian, I was born in Montreal, and grew up in the West Island. I visited my relatives from the Haitian diaspora a lot in different American cities, so I have a good grasp of English. Musically, no one around me liked what I liked, so I grew up surfing the internet, I discovered several musical styles on my own. I studied cinema at Dawson College and, around the age of 18, I decided to make music. My life as a young adult in downtown Montreal allowed me to discover its experimental DIY scene, and become a DJ, and then a composer and producer. I also design clothes, I did it notably for Klein, an experimental artist from London who shared the stage with Björk. By working with such artists, several creative visions have enriched mine. I have been able to count on real support from the creators I have worked with up to now.

PAN M 360: How did you go from DJing to composing?

TAM: In the beginning I DJed because I didn’t know much about music production. But I intended to compose, to start my own projects. My experimental, techno and industrial influences were already there as a DJ, I think of Moor Mother, Crystalmess, Dreamcrusher, Merzbow, Keji Haino, etc. I had a lot of influences in my head. I continue to develop my own style, I would say that my next recordings will be marked by noise. The more I put my music online, the more precise it becomes and the more I get approached by different broadcasters.

PAN M 360: Our propensity for stereotypes leads us to think that your approach is a departure from the idea of black music. What do you reply to that?

TAM: It all depends on the stereotypes we have! You know, I was introduced to instrumental music by black friends, I really don’t believe that experimental music has a skin colour. For sure, black experimental music artists influence me, that encourages me to continue and maybe get in touch with these artists and maybe collaborate with them. One of my aspirations in life is to make unusual music, that’s for sure! I try to deconstruct sounds and noises of all kinds, recorded in the street or everywhere I go, and then turn them into original works. I dare to believe that the authenticity of my work can be seen through my projects.

PAN M 360: Is the sexual fluidity with which you identify reflected in your music?

TAM: It is not for nothing that my first EP is entitled The Exorcism of Tania Daniel. Exorcism has an often negative connotation, I wanted to see it as a positive and spiritual rebirth. There are references in my art to the queer/trans/LGBT community, as well as gender-fluid black people, that bring a lot of positivity to my personal experience.

PAN M 360: What is the project that you’re presenting at MUTEK?

TAM: The Tati au Miel project, a nickname inspired by Tania Daniel, explores my vision of noise and puts forward experimentation. For MUTEK, I want to create an atmosphere involving all sorts of emotions emanating from unusual sounds. I am planning a 45-minute set, truly unique for the event, built from my sound bank that I have built up over time and also with my instruments – Ableton, midi controllers, etc. – which I will use to create a unique sound experience. A special guest will also come up to sing on two pieces. I’m also working with Maiko Rodrig on this project, one of my closest collaborators. We will soon be launching the Trademark collective, which will showcase different artists in experimental music. It’s all about creating a sense of community and recognising each other, because these artists are unknown and often difficult to spot. My life continues on this path.