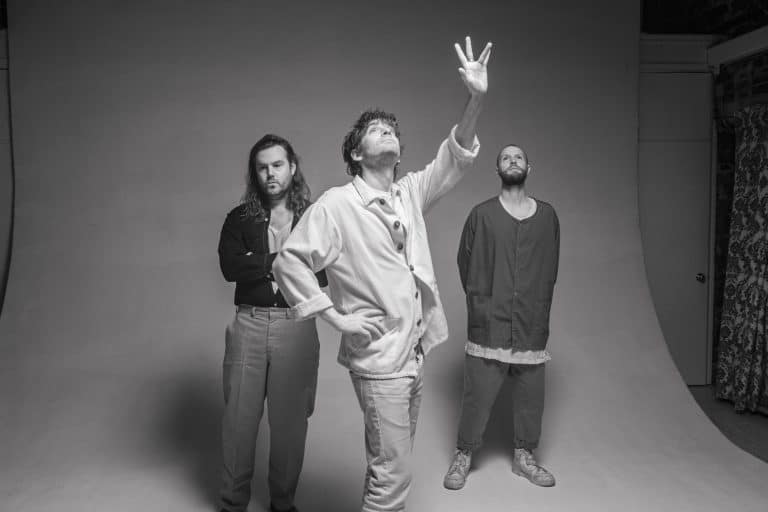 Suuns: Witnessing, one by one

The Witness is the latest addition to the discography of Montreal’s internationally acclaimed Suuns – six albums and one EP, all of high quality, including a collaborative album with Jerusalem in my Heart.

The new album explores new avenues: the inclusion of acoustic, wind, and string instruments, and superb jazz-like arrangements punctuating the hybridization between avant-rock, electronic and experimental aesthetics that Suuns has been accustomed to since 2010.

Reached in Paris where he lives now with his partner, Ben Shemie played the game of track-by-track for this new album.

The Witness is released on Joyful Noise Recordings and Secret City Records, an excellent opus of which Shemie is the frontman and main composer. Suuns will perform the material on September 25, during Pop Montreal.

PAN M 360: There are obvious changes happening in the new Suuns music. There are differences from the previous records, mainly in the arrangements. There are even acoustic moments with reeds and brass, and also melodic hooks. What are, for you, the main changes?

Ben Shemie: It wasn’t conscious, we didn’t know we’re gonna go in a different direction. But it happens. It is an oversimplification of something new we wanted to do. And there is also more focus done in the lyrics, we’ve never been a lyric-driven band before. This time, the songwriting is more lyrical and definitely more melodic than the stuff we’ve been done in the past. Also I think it’s more ambitious, arrangement-wise. It’s kind of nice for all of us to not do the same kind of thing again, and push ahead. And be more ambitious.

Ben Shemie: It is like a late-era Talk Talk kind of sound, closer to improvisation and contemporary music. I like to imagine a band as a general model of trajectory by which it can evolve, something more introspective and not pop music anymore. So because there is more contemporary music background in our world, we thought it would be cool to put some into the songs. For the writing of this record, I didn’t try to make it electronic as much, but I just tried to make something very beautiful and something  broader, with saxophones and flutes – played by Eric Hove, who will come on tour with us – with bigger arrangements.

I was still trying to keep the guitar, which is always some kind of a challenge nowadays. Yeah, this kind of a big sweeping, really focusing on the lyrics without trying to beat it over your head, it is now more rock ’n’ roll in a way, kind of more traditional. There is this Talk Talk sound in the arrangements, but also this solo Paul McCartney vibe. So when that “Third Stream” song came out originally, there was no specific intention, that was a demo and we built it up,  yeah, I think it is really fun to play it.

PAN M 360: Is the production aspect the result of a collective work?

Ben Shemie: Mostly the band is producing the songs that I write. Obviously a lot happens in the studio, it changes. For example, we played with the saxophone to get this kind of vibe, see what works and what doesn’t, translating this into arrangements, and training ourselves with those arrangements. This is what happens organically. At the very end we have the mix that changes the sound quite a bit, in terms of what becomes a priority in what you’re hearing. That is mostly done by John Congleton, our mixing engineer.

PAN M 360: “Witness Protection” is the next song, tell us about it.

Ben Shemie: This song sounds more what you would associate with our band, a kind of minimal, dancy song. There is a lot of focus on the lyrics and the melody, and I guess that song encapsulates the themes of the record. That is to say, look, that’s something that we have in common: we see a lot of the same things, now there’s an almost pornographic way of looking at the world. Today we all have this common denominator of experiencing a lot of the same things virtually but… There is also this desensitization to what we see and what we get used to witnessing all these things. The protagonist of the song says that he needs to be protected, he needs to be taken care of. And to a certain extent we all have this kind of oversaturated world.

This song is one of the first songs I wrote. Out of that the other songs were born, not because of that, but that song helps set the foundation of the album. It’s our first release, it may be the most accessible song of the record. It’s weird, of course, all our music is weird for indie music fans, for the kind of scene that we’re in. I don’t personally think that this is weird, but for the mainstream indie movement, it is weird. We have always been in between the indie scene and avant-garde scene, that’s where we always found ourselves. So that song is like our whole career: it starts off cool and just when you think you’re gonna get the payoff, it turns into something else.

Ben Shemie: “C-Thru” is a kind of a banger. Originally it was a solo piece for myself. My solo music is more condensed songs, but it doesn’t have guitar and drums, so I needed that band to make it kind of big, more massive and also to be able to fuck with my voice. I think it is a good song. And in the old-fashioned setting, the third song of an album is where you get your energy going.

Ben Shemie: This is the most minimal song, and I thought it wasn’t gonna make it onto this record. I thought it was too minimal, we had a hard time to find out how the groove would be. But it came out very nicely, kind of soulful, a bit more funky than I was expecting. Yeah, again, the arrangement is kind of weird.

Ben Shemie: This is the soulful song of the record. This sounds a little bit like “Third Stream”, I mean a song with a bigger sound, much more melodic than what we did previously. There is also a lot of work in the lyrics. At the moment of composing, we don’t think about the influences, but some people told us it sounds like a Robert Wyatt song and… when I listen to this music, I say wow, it’s true! The chord progression is indeed in the same style of writing. Wyatt’s music is more political than ours, it carries more like a message, but I get that comparison and take it as a compliment. Robert Wyatt is a great artist, some kind of deep.

PAN M 360: “The Fix” is another very ambitious song. Can you explain the creative process for it?

Ben Shemie: This is an old song, its first demo was recorded almost seven years ago. I was really excited about it,  and we were doing the Hold /Still album in Dallas at that time. We recorded that song, and then the crystal idea of the demo wasn’t there. So you can bring it to the band and you can lose the magic that the demo had. A demo is a singular vision of a song. When you produce as a band, it becomes a group effort, and electronic music is somewhat of an individual adventure. We recorded it a couple of times and I thought it wasn’t as cool as the demo, kind of diluted. It just sucked! We were about to say forget this song, we tried enough, and we finally recorded it again, thinking maybe if it’s cool we would make it as a bonus track. It’s more like a rhythmic idea and then makes sense being repeated so often. It’s very much like the identity of the band. It’s more like a groove and a piece than a song.So I loved this weird reinterpretation, and John Congleton really did a great job mixing it. To be honest I love the new version and I still think the demo is better (laughs), but the demo is too scrappy.

PAN M 360: There is a sad song next, and there are some guitars involved.

Ben Shemie: “Go to my Head” is the first sad song I wrote. I don’t know what it means exactly, but it’s in the same spirit as “Third Steam” and “Clarity”, very ambitious in its instrumentation, classical guitar, piano, horns, a funny intro like Fleetwood Mac in their song “Albatross”. Nowadays, I find it more and more difficult to integrate the guitar in a so-called rock ’n’ roll band. I’m a guitar player myself, I don’t want to play like Jimmy Page, we were able to walk that line between electric guitar music and electronic music but… The more the years go by, the more difficult I find it to integrate the guitar. It’s not as relevant an instrument as it used to be, but I still love it, I still love the sound, I still think guitar music by rock or punk bands is one of my favourite genres of music. But it’s not necessarily the kind of music I play. Joe plays guitar in the band and his guitar often sounds like a synthesizer. It’s far from a normal guitar.

In this song, at the beginning, one of my greatest joys in Suuns is to play guitar with Joe. So I wrote an intro and an outro where we play guitar in harmony with each other. A pure, classic electric guitar sound. In an almost strange way, it sounds like new again. It seems like nobody plays like that anymore! So that’s a good way to set the stage for the main part of this song, which is more of a linear composition at first but much more ambitious in its scope.

Ben Shemie: As the title suggests, “Trilogy” is a song in three sections. Actually, the more I think about it retrospectively, other songs of this album are done in three parts. I don’t really know why that is, but it seems to be that way unconsciously. This specific song is much focused on the lyrics and the voice being very upfront in the mix. The loudest vocal mix ever being done on our songs. And again, it’s very much our style: the beat comes in after almost four minutes and it goes out again. So there is a lot of restraint in this song. I think it’s a beautiful track.

PAN M 360: Doesn’t The Witness, such a refined and thoughtful album, owe its depth in part to the confinement imposed by the pandemic?

Ben Shemie: I’m glad this album is finally out, we pushed it further during the pandemic because we couldn’t tour. It would have been weird then to put a record out knowing we couldn’t play it. Instead, we had time to think about it, which we had never really done before. Spin, spin, spin, produce a record, spin, spin. It was the first time we could think about it. In a way, I’m strangely happy about it.