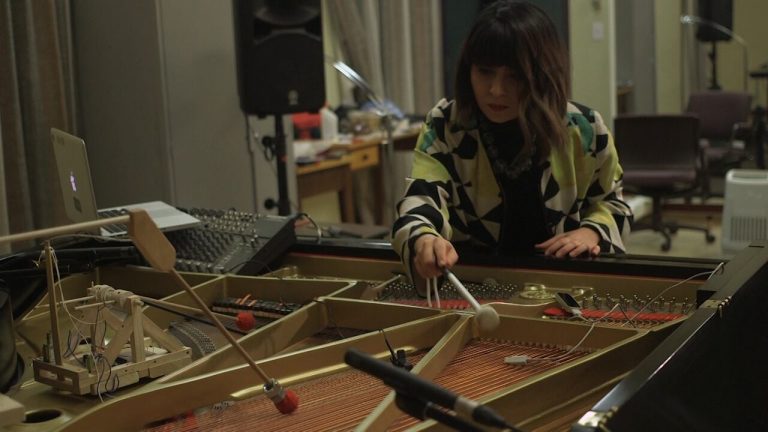 THE MOST FASCINATING QUEBEC ARTIST YOU (PROBABLY) DON’T KNOW

Anoush Moazzeni is a pianist, improviser, composer, interdisciplinary artist, researcher and educator. The range of her interests and the creative fields she explores is impressive. She teases out electro-acoustic and digital arts with roots in Boulez and philosopher Gilles Deleuze. She combines her creativity with the fields of robotics and artificial intelligence, as well as taking over museums and the stage by playing more ‘traditional’ instruments such as… the prepared piano and the synthesizer! You probably don’t know her, given the niche nature of her work. Thanks to Pan M 360, some light will now be shed on this extraordinary artist.

Last June, Anoush Moazzeni gave an inspiring concert of contemporary and female musical creativity from Iran, Turkey, Lebanon, Israel, the United States and Canada at the Suoni per il popolo Festival in Montreal. We took the opportunity to talk to her and discover her world. At the time of our video conference, she had been in Iran for almost a year and a half, due to the pandemic.

Pan M 360: Hello Anoush. You have been in Iran for more than a year now while your home is in Montreal. Why are you there?

Anoush Moazzeni: I had come to Iran for workshops and also to see family, but the pandemic took the turn that we know and given the cancellations, postponements and other delays for the return, I finally decided to let the storm pass. I’m lucky because I live in a nice flat owned by my parents, I have a piano and I was able to work remotely (I’m an Assistant Professor, Research Assistant et Ph.D candidate at Concordia University in Montreal) and even do some music commissions. I’ve managed!

Pan M 360: Looking at your web page, we can see that you do a lot of things. In a few words, how would you describe yourself?

Pan M 360: What are the roots of this interest in the avant-garde and contemporary creation? Are they rooted in family?

Anoush Moazzeni: Music ran in my family, that’s true. My mother is a singer and has always had a love for Persian literature and music. I learned to play the piano at the age of five and my parents always encouraged my choices. At the age of 18 I started my studies at Tehran University and 3 years later I went to Lyon (France) to continue my piano studies. In parallel, I developed a love for computers, philosophy and digital arts. I completed a master’s degree in piano in Montreal, and it was there that I developed my identity as a multidisciplinary artist. I discovered a cultural crossroads that allowed me to reveal my own essence at the intersection of several artistic disciplines.

Pan M 360: Where else did you get your attraction to the avant-garde?

Anoush Moazzeni: I travelled a lot! I went to Köln and to IRCAM (Institute for Research and Coordination of Acoustics and Music) in Paris. Once here in Canada, I was given the chance to participate in festivals where I could try things out. I appreciate this great freedom and the opportunity to delve into unconventional territories that allow me to explore all the avant-garde possibilities and also those of a constructive dialogue between Western and Persian traditions.

Pan M 360: As a woman of Iranian origin, do you believe you are a model, an inspiration for other women in this part of the world?

Anoush Moazzeni: I don’t see myself as a role model, but I can assume that I can be an inspiration for those who suffer from the usual limitations in this region. Yes, it’s very good if my example can help to break the barrier of ‘I can’t do that’. I see that it is still a bit taboo to be a woman and to be independent. People sometimes say to me, “Did you really do that all by yourself? Wasn’t it your boyfriend?” Even here in Canada! So I can understand the difficulties of many women in the world. That’s why I give help and advice to women composers as I did with my project Deterritorializing the realm of new music.

I have also been researching the place of women in avant-garde creation, particularly women from minorities and those from the LGBTQ+ community. If my background can serve as an inspiration, so much the better. But it would be pretentious to define myself as a role model!

Pan M 360: Let’s talk about Deterritorializing the realm of new music. What was it about?

Anoush Moazzeni: I commissioned works from West Asian composers (Iran, Turkey, Lebanon, Israel) who live and create either there or in the West. The pieces were to be written for piano (I am the performer) accompanied by either voice, tape, audiovisual installation or electronic recordings.

Anoush Moazzeni: I didn’t have any particular expectations, but I am happy to have participated in my own way in this vast project, which is to stimulate avant-garde creation in regions outside the West. I hope that in the long run, radical scholarly creativity will emerge from the almost exclusively Western territories. Hence the title of the project!

Pan M 360: In addition to being a performer, what roles do you play in the production of this kind of project?

Anoush Moazzeni: All of them! I book the musicians, plan the rehearsals, do the promotion, contact the festivals, manage the recording and video broadcasting, etc.

Pan M 360: You are definitely even more ‘multidisciplinary’ than the usual artistic label suggests! Are there any other projects of yours that we can see and hear?

Anoush Moazzeni: If people ever get to Toronto (once the border restrictions are lifted), they can visit the Aga Khan Museum, which has a beautiful exhibition by Azerbaijani artist Faig Ahmed, Dissolving Order. His work is inspired by the ancient art of carpets, a thousand-year-old tradition throughout the Near East region. He uses new technologies to reappropriate the artistic expression linked to this tradition. My contribution was a musical piece that included audio-visual materials. I used piano, digital and invented sounds, concrete sounds, such as those of a machine used to make carpets, etc., and I mixed everything together. The graphic notation was inspired by the carpet patterns of the region. I also asked an artist to weave these notations into a traditional style fabric.

Pan M 360: I also understand that you have a new project underway in Quebec City?

Anoush Moazzeni: Yes, it’s a production residency at the Chambre blanche in Quebec City, from August 3 to September 18. It’s called

Autopoiesis in the Making and it’s about creating original digital instruments. It will take advantage of my interest in interdisciplinarity because I will include artificial intelligence.

The beauty of this is that the result of my research there will be integrated into another project under construction, that of an opera at Concordia University. It will be very experimental, very far from the traditional form. In addition to investing artificial intelligence, I want to integrate virtual reality. The singer will have to move and interpret the score in a totally new context.

Pan M 360: Do you still give traditional classical piano concerts?

Anoush Moazzeni: No, not at the moment. I am very busy with my career in the avant-garde. But I still practice every day.

Pan M 360: Who inspires you in contemporary art?

Anoush Moazzeni: Artists in akousmatics, electroacoustics, and also female artists and many from first nations.