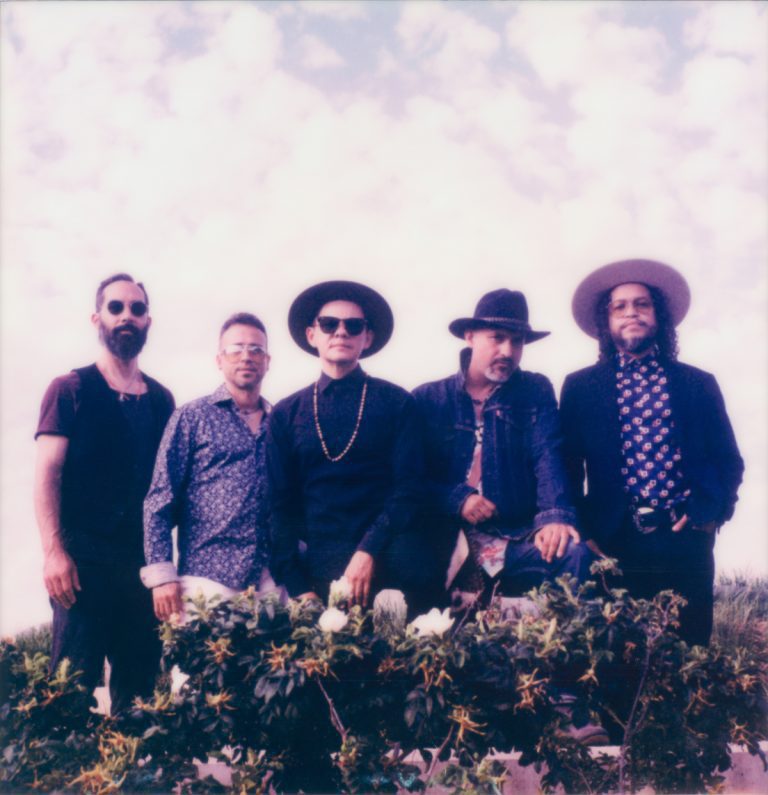 Dos Santos: Held Up at the Border

Traversing most of Latin America in their resources, Chicago’s Dos Santos have cultivated a mature and considered strain of alternative rock, one that’s resonantly reflective of the borders they have crossed—and returned to. The contents of City of Mirrors, their new album on the hot Chicago label International Anthem, are to an extent a variant of Americana with the whitewash stripped away, revealing fragments and echoes of much vaster map of the misnomered “new world”. The sounds are richly textured, at times a dreamlike haze, at others with a gritty sharp focus. It’s also music that is deeply literary and learned, to be expected given that bandleader, singer, and lyricist Alex Chavez is also an author, and an associate professor of anthropology at Notre Dame. PAN M 360 corresponded with Chavez, to gain more insights into substance and subtleties of City of Mirrors.

PAN M 360: Borders are imaginary lines across the continuity of Earth’s surface that can nonetheless be very real as they entrap and entangle, wound and deny. In many cases, they are the invisible lines that separate the privileged from those who struggle. City of Mirrors returns to borders often, as things to be explored, challenged and transcended. Do you feel that’s an accurate assessment?

Alex Chavez: We have always explored the issue of borders and their crossings through our music, both in terms of subject matter—lyrically/creatively—and musical composition, as we have always sought to incorporate our various transhemispheric influences. This is at once—always—cultural, political, and social. It is what we know and who we are.

PAN M 360: Borders define space, but time can also have figurative borders. I hear this in City of Mirrors, and not just in the different musical eras it touches on, and they are many. It’s in the themes too. Some songs, like “Crown Me”, are pressingly current. Others are timeless, or rooted in memory—“that was then, this is now” is probably one of the clearest temporal borders. Any thoughts on that?

Alex Chavez: Temporality is always a key in dimension of any border crossing, for the self is both emplaced and embodied, and the two are bound through what French philosopher and public intellectual Maurice Merleau-Ponty refers to as reversibility. In other words, the body not only reaches places but also bears the traces of the places it has known—these residues are laid down within the body, and this incorporation ultimately shapes both body and place, for places are themselves altered by our having been in them. At last, these embodied memories of place ring out, especially during performative moments that occur across time.

PAN M 360: The title track is a love letter to Puerto Rico, but it’s inspired by the great Colombian writer Gabriel García Márquez, who certainly knew how to blur those borders in time I mentioned. Do you think the idea of magical realism, of which he is among the greatest practitioners, has had an influence on the music you make with Dos Santos?

Alex Chavez: Perhaps not always, but certainly on this record. Yes, indeed, “City of Mirrors” is a love song to Puerto Rico amid the aftershocks of disasters past and present, historical and ongoing. Inspired by Gabriel García Marquez’s A Hundred Years of Solitude, we imagined Puerto Rico in the image of Macondo—the city of mirrors—a place of beauty and trauma, of struggle and triumph. We feel the Caribbean embodies the extremes of such dichotomies borne of the violent legacies of colonialism and an invented “new world,” while remaining a cherished place of beauty, refusal, and freedom dreams to remember. And so, we asked, what luminous echoes between love and solitude, hope and absurdity, euphoria and mourning are necessary in holding onto the places you cherish, those you call home in the face of oblivion, always. Perhaps, an oblivion in the form of the noisy city in the depths of José Arcadio Buendía’s slumber? And when he asked what city it was, “they answered him with a name that he had never heard, that had no meaning at all, but that had a supernatural echo in his dream: Macondo”— the city of mirrors. A place of beauty and dread, “secluded by solitude and love and by the solitude of love.”

PAN M 360: The brief track “Jaguar de Rosas” welcomes the Chilean writer Gabriela Mistral, who reads a fragment of her poem “Recado a Lolita Arriaga, en México”. It would be rewarding to know a bit more about her.

Alex Chavez: This is a historical recording written and performed by Gabriela Mistral, the audio courtesy of the Archive of Hispanic Literature on Tape, Library of Congress (1950). We are fans of her work. She was South America’s first ever Nobel Laureate in Literature.

PAN M 360: On City of Mirrors, you’ve enlisted the help of two of the architects of the American Afrobeat revival, Elliot Bergman of NOMO and Martín Perna of Antibalas. Both of whom have a history of dipping into experimental sounds, I’ll add. What prompted you to invite their participation?

Alex Chavez: Elliot Bergman is a friend of the band and based in Chicago. When we made the decision to work with a producer on this record, he was at the top of our list. We subsequently reached out to him, and he accepted—and then we embarked on the journey of making this album, most of which was recorded out in Los Angeles, California. During one of those sessions, Martín Perna of Antibalas—who collaborated on the previous Dos Santos record, Logos—reached out to Alex Chavez to catch up, they have known one another for years. Perna mentioned he was also in Los Angeles, and thus in this quite serendipitous way he ended up coming by the studio and playing on the album. It was a wonderful coincidence.

PAN M 360: “Palo Santo” is a political song, but its title refers to the “holy wood”, bursera graveolens, burned for purifying purposes since Incan times. The word palo can also mean, in Spain, a robbery or a flamenco dance. In Peru, it can mean a lie, in Puerto Rico, an alcoholic drink, an advantage, or a success of some sort. In Argentina, a million pesos, or an erection. Any of these can be anointed with holiness by adding “santo”, and become, at the very least, the start of a very good story. Do you think any of these variations of palo santo apply elsewhere on City of Mirrors? “White. Lies”, perhaps?

Alex Chavez: That song, yes, is a commentary on the contemporary lived politics of race in the United States, and movements for social justice in response. We imagine these movements as part of a larger struggle to change and transform, to usher in a new day in this country. The title “Palo Santo” is invoked with reference to its ethnobotanical use in Mexico and other parts of Latin America as central to ritual purification, much as these movements are also spaces of sacred congregation to purify and change the world.