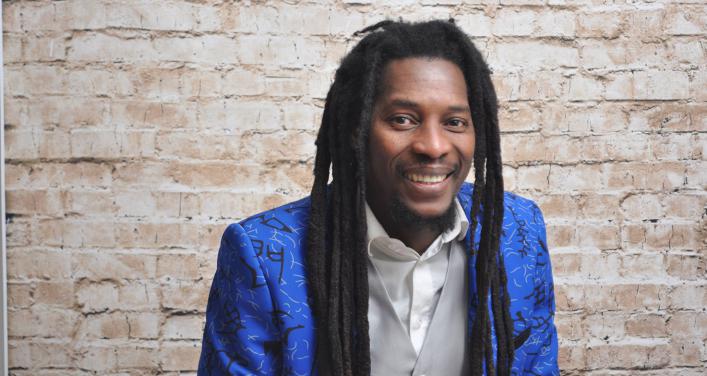 Following in the footsteps of Alpha Blondy and Tiken Jah Fakoly, Ivorian reggaeman Dakka Dembélé invites us aboard his “Petit bateau”, docked in Montreal, with the launch of his first album and a performance of the material at the Nuits d’Afrique.

Last March, Dakka Dembélé was due to launch his album Petit bateau on the Nuits d’Afrique label, but COVID 19 decided otherwise. Here we are, nine months later and in the red zone, and the launch show finally takes place without an audience, though an audiovisual recording allows us to attend remotely. On Petit bateau, the singer fully plays his role of reggaeman and decries the very risky journeys of migrants on overloaded boats, which can lead them to drowning rather than to the promised land. On the other hand, Dakka Dembélé offers us a most convivial roots reggae cruise, with a mix of West African colours, a worldly sound system imagined in Montreal.

PAN M 360: How do you explain the importance of reggae in Ivory Coast, where you were born? After Alpha Blondy and Tiken Jah Fakoly, other reggae is emerging in West Africa, as it is also the case in Mali, where your parents come from. We could also mention the late South African Lucky Dube among your influences… Explanations?

Dakka Dembélé: Alpha went to Jamaica, where he met Bob Marley and was inspired by reggae music. He then returned to his country, Ivory Coast, where he made a first album, very inspired by his Jamaican experience, and he was the precursor of this style in Ivory Coast. Ivory Coast is also a country that is very open to the world, unlike other, more conservative African countries, so it was a fertile breeding ground for becoming a hub of African reggae. My main influences in African reggae are definitely Lucky Dube, Alpha Blondy, Ismael Isaac, and Koko Dembélé. These are the reggae artists that rocked me throughout my childhood and adolescence. Tiken Jah arrived a little later, and he’s also a source of inspiration.

PAN M 360: How do you place yourself in relation to Jamaican legends? Who are your favourite reggae artists from Jamaica or the Jamaican diaspora?

DD: My favourite artists from Jamaica are Peter Tosh, Bob Marley, Culture, Burning Spear, Gregory Isaac, etc. They are music that I listened to as much during my childhood and adolescence. For me, they are really the founding fathers of reggae, and I have a lot of respect for them.

PAN M 360: Before migrating to North America, how did you learn the profession of musician, author, composer and singer?

DD: Although I was born into a family that was opposed to my musical career, music has always been present in my life. At the age of nine, my family was struck by poverty; I continued school, but I went to shine shoes at the train station. The songs of Bob Marley and Alpha Blondy accompanied me during this period, and I felt the need to denounce injustice and discrimination. I started to compose and write in secret. As a young adult, I founded my first successful group, DakkaGounga, in Abidjan. But in 2003, I was forced into exile in Mali because of the civil war. Thirteen years after my arrival in Quebec in 2007, the release of the album Petit bateau marks a major milestone in my journey as an artist.

PAN M 360: How would you describe the African touch in your reggae? Is there a link with your more specific cultural origins? What ethnic communities do your parents come from?

DD: My parents are Dioulas, so I sing in French and in Dioula. The Dioulas are descendants of Mali. They are generally traders and have always travelled throughout West Africa. My reggae is definitely part of my African history. For the most part, I deal with themes related to Africa, but also to my experience as an immigrant here in Quebec. I make reggae with West African sounds and mixed influences.

PAN M 360: How do you distinguish yourself from your predecessors and contemporaries?

DD: I’m part of the tradition of francophone and Mandingo reggae. I want to offer a voice to the marginalized and the most disadvantaged, wherever they live. I deal with issues related to inequalities, I sing about peace, hope, and the contrasts between my Africa and my Quebec. My Canadian reality has profoundly transformed my identity, and it also colours my current compositions. I distinguish myself from other African reggaemen by a very personal touch to my compositions, that comes from my own history and my personal rhythm.

PAN M 360: How would you describe your creative process?

DD: My creative process is unique in itself. I always start as a solo artist; I begin by working on the lyrics and melodies. As mentioned, I write in French and Dioula, and as Dioula is a tonal language in which the pronunciation of the syllables of a word is subject to a precise tone (at a specific pitch or a characteristic melody), when I compose, I base myself on the melody and the word inseparably. Once the skeleton of the song has been built, I play it back to my collaborators, who work on the composition and arrangements.

PAN M 360: When you arrived in Quebec in 2007, you were working as a shoemaker. Where did you receive your training, and do you still work as a shoemaker, to make ends meet?

DD: I started shining shoes in Abidjan train stations and then I became an apprentice to a master shoemaker in Trechville, Abidjan’s red-light district. One thing leading to another, I mastered the trade. I have always practised the trades of shoemaker and singer at the same time. I opened my own shoemaking shop in Montreal in 2011 (Cordonnerie Dakissa). I’m located in Plaza St-Hubert.

DD: When I arrived in Montreal, I discovered a musical scene of such richness as I’d never imagined, where cultures and styles mix and mingle. The Montreal scene and its diversity have always inspired me. This scene has helped me to further perfect my stage presence and my composition work. I have collaborated with all these artists at different levels and they have all brought me new learning and a fresh look at my compositions.

DD: The musical direction of the concert is provided by the Ivorian arranger and producer Apotcho Strong. It was he who set the guidelines for the interpretations. Guy Kaye only worked on the album, in collaboration with Apotcho Strong; Apotcho brought all his expertise in the sounds of African reggae, while Guy Kaye brought all his experience and expertise in world music and funk. Guy was also the mastermind of the mixing. For the band, I went looking for musicians with extensive reggae experience: Ons Barnat (keyboards), Botty Pottinger (guitar), Sylvain Plante (drums), and David Sergeti (guitar), as well as Apotcho (bass). The backup singers, Mélissa Pacifico and Mélanie Charrier, also worked on the album.

PAN M 360: Your team is multicultural and Montreal-based, how has that changed your music?

DD: Yes, indeed, I have a mixed team (Quebec, France, Ivory Coast, Jamaica, etc.). Everyone really brings a very special touch to the interpretation, which creates a unique overall sound.

PAN M 360: What is your link with Montreal, Quebec, North America, the West? Has living in Montreal transformed you? And if so, in what way?

DD: Yes, living in Montreal has completely transformed me. It gave me a different view of the world. Especially multicultural Montreal: I’ve gotten to know other cultures and I feel really good about it.

PAN M 360: What do you plan to play at the Nuits d’Afrique on Thursday, November 5?

DD: Thursday’s show is also the launch show for my album. I was supposed to do this launch at the Ministry on March 13, but history has dictated otherwise. So this show gives all the space to Petit bateau’s compositions with three compositions from my repertoire that are not on the album. There are also several guest artists: King Shadrock, Emde, Slim Samba, and John Kerkhoven.

DD: I’m working on an acoustic video project that will be launched on social media in the autumn. I’m already working on a second album. I will enter research and development in the winter of 2021, with the goal of releasing the next album in the fall of 2021. Of course, I’d like to plan tours, but it’s rather difficult in the current context.