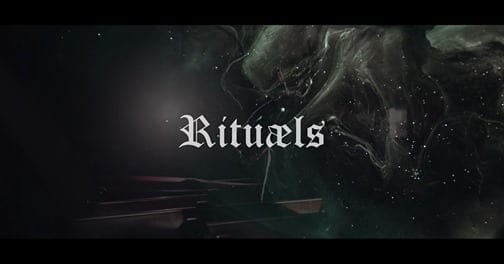 Collectif9: Taking the time to listen to music differently

The very cool ensemble Collectif9 proposes Rituaels, a musical-video journey with almost mystical echoes and hints of… a beneficial ritual in these troubled times. The naturally amplified and reverberant music of Arvo Pärt, Michael Tippett, Nicole Lizée, Bryce Dessner (yes, from The National), Jocelyn Morlock, and even Hildegarde de Bingen resonates with rare emotional and even spiritual significance.

The Montreal-based ensemble has only been on the local scene for a few years, but it’s already, in my humble opinion, one of the most interesting things going. If you love meaningful instrumental music that both upsets your listening habits and gives you goosebumps, you absolutely must hear them at least once. And that’s just as well, because from December 11 to 13, you’ll have free access to their latest adventure, a film-concert called Rituaels.

As a prelude to the premiere of Rituaels, broadcast on the group’s website and on Facebook starting at 8 pm on December 11, I spoke with their leader, double bassist Thibault Bertin-Maghit, who explained that the idea for Rituaels came from a “normal” concert that was to be given on May 2. Pandemic and associated restrictions forced the concert to become a larger project, involving a dancer and creative video to accompany the music. In the end, Rituaels quickly became a kind of big, one-hour music video.

“Once we knew that Rituaels could only be digital, at least in the near future,” says Bertin-Maghit, “we decided that we should fully engage with this form of broadcasting and use all the advantages it offers us. We wondered how we could keep the audience’s attention for 60 minutes. A filmed concert involves a few camera shots, but at a certain point, when you’ve seen the same shots four or five times, it becomes boring. So we added shots with dancer Stacey Désilier as well as video creations by Benoit Fry and Lucas Harrison Rupnik.”

The result, which I had the chance to watch before the first broadcast, is very beautiful. It alternates simple but beautifully staged shots of the musicians in Montreal’s Saint-Pierre-Apôtre church with the stylized movements of Désilier, soberly clad in white.

But no matter how neatly shot, the visuals serve primarily to support one thing: the music. And what music! Mostly modern and contemporary, in the tradition of mystical contemplative minimalism, or, if not, one that “fades” perfectly with it.

“Since we initially wanted to play in a church, a very reverberant space,” Bertin-Maghit continues, “we decided to fully dive into this choice. Musicians often ‘make do’ with reverberation, fighting to avoid letting it dominate everything. For our part, we have chosen rooms that not only work perfectly in this kind of acoustics, but that even come out of it bigger.”

Bigger, yes, I would say so. Arvo Pärt could only sound good in this, as one would expect, but the neo-ancient colours of Tippett’s homage to Purcell succeed just as well. I also note the delicate and poetic extravagances of Nicole Lizée, and the furious and uplifting energy of Bryce Dessner’s Aheym (a rare non-contemplative piece in the programme). There is even the medieval mystic Hildegarde de Bingen, who launches the show in a bewitching way with O vis æternitatis.

The rich, warm, long-lasting harmonies, the long sustained notes and the early musical resonances of most of the works on the programme create a sensory landscape that evokes timelessness, duration, the non ephemeral, the signifier and, finally, the real, the important. It’s a horizontal music, which forces us to get out of the verticality of the instant and immediacy – anti-commercialism at its best.

The staging of the musicians, already planned for the concert, is well treated in terms of camera shots. The musicians change position after each piece, in a calm choreography. Surrounded by a few white curtains suspended, and lit from a few discreet sources, the resulting subdued look evokes, yes, a kind of ritual in which everyone can see what they want: religious inspiration, ancestral pagan evocations, secular and profane spirituality, transcendence of Art and Beauty. In the end, it doesn’t matter: whoever participates will be touched and perhaps even transformed.

After the broadcast of the 11th, the concert will be available free of charge for a further 48 hours. Having said that, will it be possible to experience this sublime music in a “face-to-face” setting, as they say now?

“We would love to take this concept on tour,” Bertin-Maghitto replies, “take it on the road, so that the audience can experience the powerful experience of this music with us, at the same time and in the same place. But for now, I invite everyone who will be watching to settle down and take the time to get into the rhythm of the music. I hope it will bring well-being and comfort.”

Collectif9 has a mandate to reinvent the way people listen, see and participate in classical music concerts. To play music of (not just) today that speaks to a (not just) young audience, to invest in unusual venues (bars, discos, warehouses, etc.). Not only do they succeed, but they open up new avenues. I wouldn’t be too surprised to see them one day collaborating with Montreal indie cult groups. Imagine a creation involving, oh, I don’t know, Godspeed You! Black Emperor? Anyway, Thibault says he’d love that. Who knows? The message is out!