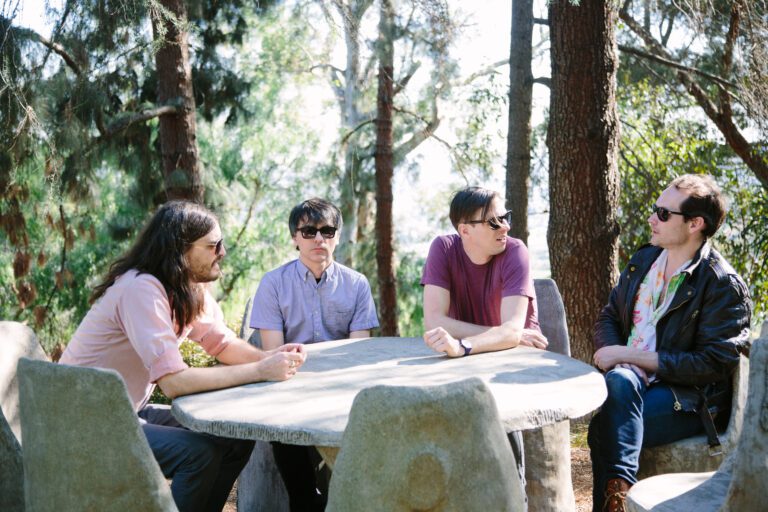 Holy Fuck, an experimental synth-punk four-piece from Toronto, has always gone against the grain. It can be said that no one sounds like them. They use found objects, broken drum machines, toy instruments, and an array of other garbage to unleash electronica built for mayhem.

The Holy Fuck members have worked with other big-name bands like METZ, Alvvays, Lights, and some more obscure names like Obits, but always retreat back to Holy Fuck for a creative and cathartic release of smoking and scorched sounds. PAN M quickly spoke to Holy Fuck before their performance at Entrepôt 77 for Distorsion Psych Fest.

PAN M 360: Holy Fuck has always seemed to do the opposite of what is trendy in genres. Is this purposeful and thought about?

Holy Fuck: We aim to displease. Maybe why we went from ‘buzz band’ to ‘underground anomaly.’ I think there was a deliberate effort, in the beginning, to sound outside of any time period, especially the current one. It was more important for us to be ‘timeless’ than it even was to even be liked. Some people were into it, some weren’t. But the goal was to still sound fresh thirty years later. Who knows if it worked… I’ll ask you in another fifteen.

PAN M 360: Could you talk about the newer track “Ninety Five?” The drums sound like they were recorded in a shoe box or something.

Holy Fuck: There’s a really cool audio emulator with the recording software we use, called Shoebox. You can pick the model and size of shoebox you want your drums to sound like they’re in… we chose Nike ‘Clown-size’

PAN M 360: What was it like making music remotely? I assume Holy Fuck thrives more when you make music in person, together?

Holy Fuck: Yeah, we didn’t flourish under pandemic conditions. Making music on laptops in home studios isn’t the fun part of being in a band like ours. For us, it’s about an exchange of ideas and energy in real-time, in the same space. We did what we could and then said fuck it. Now we’re back together again… hooray!

PAN M 360: Are there plans for a follow-up EP or even album to Deleter in the near future?

Holy Fuck: It is the plan. But no, nothing recorded yet. Our first time getting back together as a band only happened earlier this year. We did a lot of writing and demo-ing as well as practicing for the tours that were postponed. That’s how we tend to work- sequester ourselves away to write and record when we aren’t touring. And it’s all just starting to happen now. So next break this year we’ll get back to it.

PAN M 360: How many speakers have you personally blown with all that heavy drone and bass?

Holy Fuck: There’s a familiar smell to a monitor melting on stage that we’ve all come to know very well. It’s nostalgic…. mmmmm…

PAN M 360: Can you talk about recreating these songs live, how do you keep that punk rock intensity?

Holy Fuck: I think because we write and record these songs live together, getting on stage to recreate them actually just further hones them in, makes them better, and brings a better energy every night. It’s part of the fun of a band like this. It never stops being new and exciting.

PAN M 360: What are some things that have made you think, ‘Holy Fuck’ this year?

Holy Fuck: Touring again, being in a sweaty basement filled with weirdos.