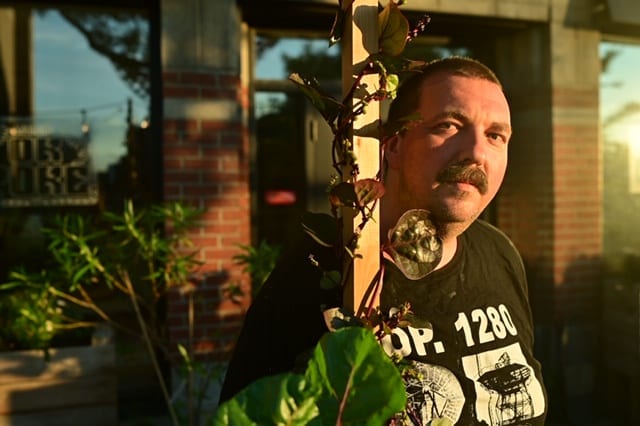 Beaver Sheppard is a hyper-productive artist, known as much for his paintings as for his cooking and his music. With Downtown, Beaver Sheppard unveils his most eclectic and diversified album.

Prolific would be an understatement to describe Montreal artist and chef Beaver Sheppard. His body of work is impressive, so much so that it is almost impossible to count everything he has ever painted or composed and recorded. He himself would have a hard time telling you. An eccentric and erratic character well known to a certain Montreal wildlife – and elsewhere – Beaver/Jonathan Sheppard is everywhere at once. When he’s not behind the stove at his little restaurant Oke Poke, the chef turns into a painter whose canvases are worth thousands of dollars, or into an outstanding composer with a golden voice.

We managed to catch him at the end of a long day’s work so that he could tell us about Downtown, a frankly amazing record on which the St-John’s native offers us a sound canvas on which he skillfully mixes colours. Whether it’s the irresistible “No One Knows”, a synthwave song with ’80s tonalities that has everything to become a hit, the very nice folk ballad “Full Moon”, the strange title track that opens the album, or the groovy “Chameleon” that concludes it, Downtown, marked by the author’s amazing voice, is not lacking for earworms.

PAN M 360: You have an impressive array of releases of all kinds, as much under your own name as with CO/NTRY, Drug Face, or the Germans Brandt Braueur Frick, not to mention all your numerous contributions to various bands or artists. A simple glance at your Bandcamp page reveals the full extent of your work.

Beaver Sheppard: I wrote my first songs in Grade 7 and I think my first record dates back to 2006, on a Baltimore label. But I’ve got a ton of stuff that I’ve never released. Oh no, wait, my first record came out in 1997. We were playing on pots and pans and plastic containers. At that time I was into a lot of stuff like Smashing Pumpkins and Nirvana. A guy sent it to me recently and it’s pretty good, except for the lyrics… I think I’ll release it! In fact, I should throw everything I have on the web. It’s ridiculous, everything I’ve got on tape.

PAN M 360: You cook a lot, you paint a lot, you make music all the time… how do you manage to stay so prolific and creative?

BS: Um, I don’t know. I’m not really thinking about what I’m gonna do. I’m just settling down and creating something. That’s where the ideas come from. Especially for music, I’m always coming up with stuff. I try not to get too lost in the lyrics. I work on them, but never too much. If it takes me more than a few days to come up with lyrics, I’ll give up. It’s all there, the melodies, the arrangements, everything… except the lyrics. I’d say I’ve got at least 200 of these, all on four-track tapes. And I’ve got as many songs on tape as I’ve got in the back of my head. It’s kind of crazy.

PAN M 360: For your new album, you got an unexpected boost, didn’t you?

BS: Yeah, there’s this Warpaint girl, Stella [Mozgawa], who sort of allowed me to make this record. She liked my first albums and she offered me to record something like that. I thought she’d like my recent stuff more, like what I did with CO/NTRY, but she liked the messier side of my early albums. She wanted me to do something a little crazier. I told her okay, no problem, and I started digging through all my old recordings, and building on what I was inspired by in all those old tapes. I actually think the best things I’ve done have often come from nothing, from something simple. As soon as you start thinking too much, working the thing too much, it becomes… predictable. I like it to be messy and a little crooked. There’s a magic in that. I don’t like these fucking studio musicians who know every note by heart, who play perfectly on the tempo, it sucks.

PAN M 360: What you’re saying here makes me think a bit of the work philosophy of Billy Childish, who, like you, paints and makes music. For him, a work of art doesn’t have to take an interminable time to complete. It’s a waste of time for creating something else.

BS: Yes, I know him! I opened for him in Montreal. Wow, that was wild. I was pretty buzzed that night, I was actually pretty high at the time. I was on acid, before I even went on stage, and then I went backstage where I had a long and intense discussion with this guy. He’s got this kind of aura… I don’t know what he was on, maybe nothing, but he had this natural buzzed vibe, you know? I didn’t know him at all before. Then I learned he’s kind of the guy who reinvented garage rock. I found out that he had made a lot of records and I asked him why he was making so much music, and he said, “I have to, because if I didn’t, I would be dead.” That made a lot of sense to me.

PAN M 360: Back to Downtown, tell us a bit about how you built the album.

BS: I had a month to complete everything. So I tinkered with old recordings, different ideas and old samples. Take the first song on the record, “Downtown”, it’s from a jam I did with other musicians, 15 or 16 years ago. I thought there was something crazy and raunchy, with one of the guys playing the wrong note on a piano… I liked it, and I put it on a loop. Then I grabbed a saxophone and I improvised. Then I grabbed the microphone and started throwing out a stream of lyrics like that, spontaneously. I cut and pasted here and there, and added a couple of other things, and that was it. For “I Only See You”, I wrote the lyrics as fast as I could just so it wouldn’t drag on, and I moved to something else. (laughs). It turned out pretty nice in the end. I used a kind of Caribbean steel drum that I got at Christmas. I was a little bit inspired by Brian Eno’s [and John Cale’s] song “Spinning Away” for that track. There’s something playful and fragile in this song. For “Chameleon”, I used something we recorded with CO/NTRY, a long, raw 13-minute jam. I sliced the whole thing up and built “Chameleon” up with that! I think the guitar is sick on this track, it’s like “Cotton Eyed Joe”! (laughs). For another song, it was a something I did with Drug Face, my project with Thomas Von Party… The whole album was cobbled together from songs or sketches I had.

PAN M 360: We also find some more folk songs on Downtown (“My Oh My”, “Full Moon”), similar to the ones you recorded on your first albums…

BS: Yes, and I want to explore more of that kind of sound. What I find interesting with this album is that each song was recorded in a different place. Everything was finished in the same place, but each of the 10 songs comes from a different time and a different place.

PAN M 360: The song “No One Knows” is really good. It’s definitely something that could be a hit.

BS: You’re not the only one telling me that. In fact, we’re going to make a video for that… ah yes, and one for “Tornado Brain”, a remix that Ricardo Villa-Lobos made of one of my songs last year. But to come back to “No One Knows”, it’s a beautiful song I wrote a year ago, out of nowhere. I actually wrote a lot of good stuff last year, and I should release it… Come to think of it, Downtown is clearly the most diverse album I’ve ever done. It doesn’t cover everything I like to do in music, for example I’ve got a whole album of electronic music ready, and another one of totally fucked-up music, and then I’d like to do stuff more in the vein of Talk Talk, Neil Young and Arthur Russell, do songs about Newfoundland… and more contemporary art… if at least I had the time! But I like the idea of leaving behind a lot of stuff once I’m dead, thinking that people are going to fight for it… It’s something I think about a lot.