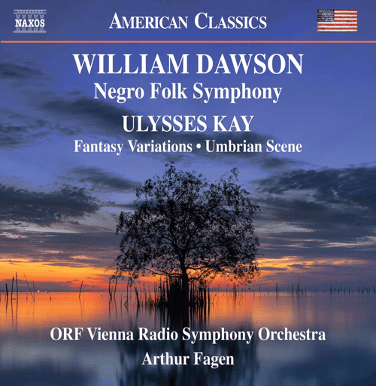 The names of William L. Dawson (1899-1990) and Ulysses Kay (1917-1995), two African-Americans, it should be noted, are not among those usually heard in the canonical repertoire of Western scholarly music. It’s therefore a very good omen that the prestigious Vienna Radio Symphony Orchestra, under the baton of conductor Arthur Fagen, is focusing on orchestral works by these composers who, along with William Grant Still, Florence Price, Margaret Bonds. and others, shaped the development of 19th- and 20th-century African-American classical music.

Dawson’s Negro Folk Symphony, premiered in 1934 at Carnegie Hall by Leopold Stokowski, uses the Romantic symphonic model while featuring movements that incorporate a recurring motif introduced by the horn, and which evolves in variations throughout the work. Citing several fragmented African-American spirituals (except in the second movement), Dawson somehow unites two worlds in a musical narrative that evokes uprootedness (“The Bond to Africa”), hope (“Hope in the Night”), and resilience (“O, Le’ Me Shine, Shine Like a Morning Star!”).

More prolific than Dawson, who devoted most of his career to choral singing, notably by forming the excellent choir of the Tuskegee Institute, Ulysses Kay offers a style whose biting, almost Schönbergian neoclassical sounds contrast with the idiomatic lyricism of his elder colleague. In his Fantasy Variations, Kay surprises by presenting the final result of the variations at the beginning, and the main theme at the end. Umbrian Scene, in contrast to its title, does not evoke the picturesque landscapes of Italy. Its character is rather dark and intriguing.

With what is only the third major recording of Negro Folk Symphony (1963, 1992), Maestro Fagen and the Viennese orchestra deliver an elegant and poignant performance of a brilliant and varied repertoire. In a context where we are more than ever led to wonder about a lack of diversity, and where the existence of such music must be noted, this album comes at the right time.