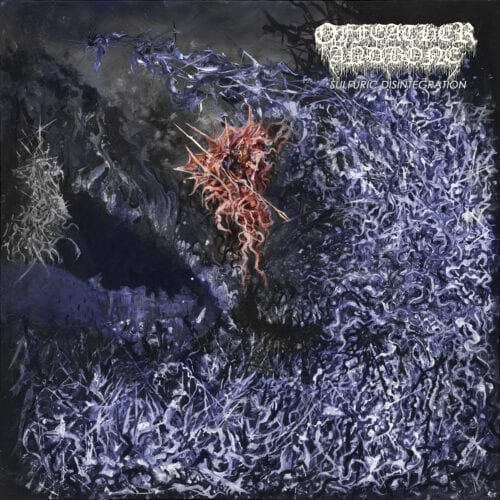 One would have thought that the hardcore scene would take advantage of the toxic political context of the last few years. However, in the world of extreme music, it’s instead death metal that seems to be undergoing a rejuvenation, as young bands abandon aseptic productions and technical prowess to concentrate on the hideous, primal, and menacing side of the genre.

Appearing in the 2010’s, Of Feather and Bone is a worthy representative of this trend, inspired by the more organic and natural death metal of the old school. Their previous album, Bestial Hymns of Perversion, was an ultra-“cavernous” death metal, based on a deafened production that left little room for subtlety and detail. In exchange, the listener was immersed in oppressive, unhealthy, and mysterious atmospheres. For Sulfuric Disintegration, their third album, Of Feather and Bone lets some lights into the cave. This clarity allows the listener to discover what they could only have guessed at before. Despite the noise and the density of the proposal, the production, now precise and detailed, allows the nuances to express themselves and highlights the musicians’ performances, especially that of the drummer, who occupies a lot of space.

Horror films, however, have taught us that it’s often what’s left to the imagination that’s most frightening. Thus, if this new record arouses interest because of an impeccable production and several solid passages that sometimes take the band to the limits of black or war metal, we wonder if the band hasn’t lost a bit of its singularity by trying, in a way, to standardize itself. Fortunately, they’re still far from aseptization. With Sulfuric Disintegration, Of Feather and Bone continues their ascent.