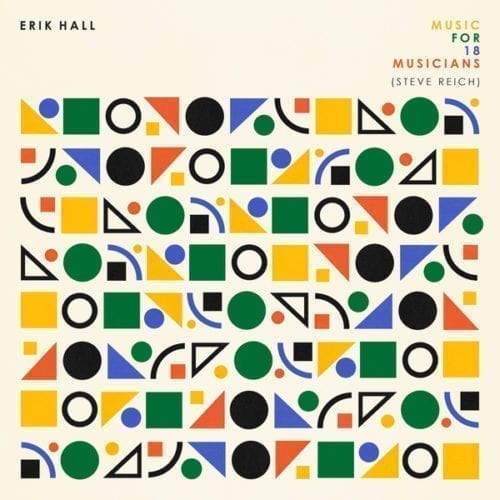 Erik Hall’s gamble is ludicrous – to meticulously recreate, in his basement studio in Michigan, alone, one track at a time, Steve Reich’s immense masterpiece, whose composition took almost two years of work.

Curious, I started listening to it to see what it sounded like. And a bit like when you see one of your favourite films on TV, and you start watching it just to watch a few fond scenes, and then finally see it through to the end – he snared me. I got caught up in that great game again, and listened to it in one go.

The most distinctive feature of this new version is its tempo. It is indeed the fastest ever recorded, which gives it a nervous energy, a very interesting, almost stressed-out aspect. For comparison purposes, it is five minutes shorter than the original version, released by ECM in 1978 (which remains the one, par excellence) – that is to say, 53:54 against 58:55. There is also a more relaxed, very successful version, recorded by the Grand Valley State University New Music Ensemble and released by Innova in 2013, which lasts 61:20. The “slowest” performance, in which Reich took part, released by Nonesuch in 1998, is 67:42. (There are also other recordings, including those of Ensemble Modern, 1999, and Ensemble Signal, 2015, lasting 58 and 59 minutes respectively).

But let’s get back to the one at hand. Although he relies on a large electronic device for his work, Hall recorded each of the countless tracks in real time. He even tried to do it in a single take. Of course, he sometimes had to do a few before he got the right one, but he didn’t cheat. Although he had to use a synthesizer to recreate the sound of the bass clarinet, the performance remains acoustic (with a nice touch of distortion in the electric piano) and very human. And despite its slightly faster tempo, it never sounds robotic.