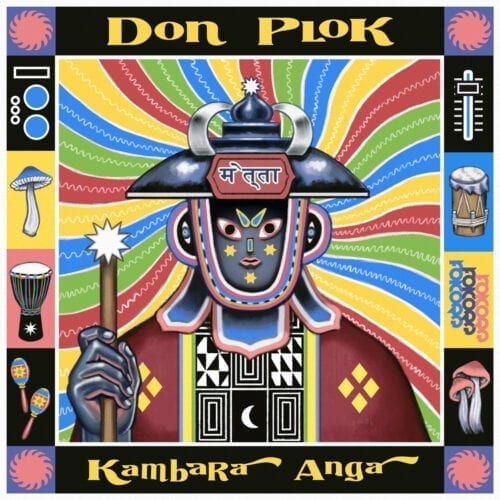 Head DJ and founder of Guateque Soundz collective, label, and club night, based in Buenos Aires, Pablo “Don Plok” Carpignano is a gentleman of consequence in Argentina’s energetic ecosystem of neo-cumbia and tropical bass. Just short of a year ago, he dropped the album Relajado, Pero No Regalado on the German net label Kumbale, much of its contents decidedly on the harder, digital side of new cumbia.

With Kambara’ Anga, his debut on the always-interesting Spanish label Folcore, Don Plok dials down the intensity by several notches (the better to allow the delicious detailing breathe), and digs further into the African influences that have informed his efforts for over a decade now. The Afrobeat at half-speed of the subsequent “Axêxê”, for example, and the giddy astro-highlife of “Puro Extracto”, demonstrate the results quite nicely.

Both of those tracks feature the busy guitar work of Agustín “Jarki” Jarkowski, one of the numerous collaborators here. Also note Santiago Aragón’s deft trumpet playing on the easygoing jazz number “African Midi”, and Daniela Nanclares’ moving vocals on the lovely “Mi Mai”. Doubtless the many friends involved, and the five-year span over which these tracks were built, contribute to the rich and well-resolved variety of this album.