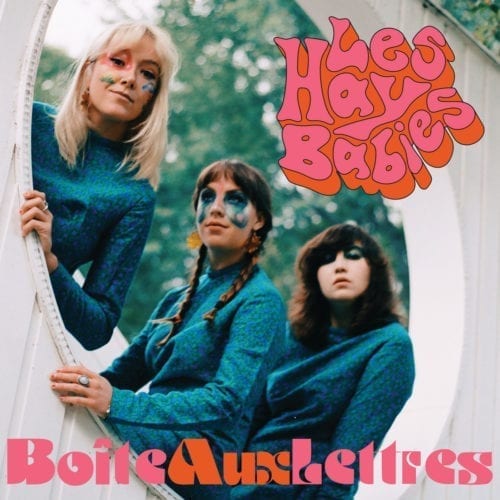 While indulging her passion for vintage clothing, one of the girls in the trio Hay Babies came across… a bread bag containing an epistolary exchange dating back to 1965!

It was about 60 letters that a certain Jacqueline (Jackie), who had moved to Montreal, wrote to her mother in Moncton, New Brunswick.

Imagining the rest, including the mother’s responses to her defiant offspring, if we consider the habitus of the time, there was enough material to create a whole concept album. Bingo!

This immediately gives the work in question, Boîte aux lettres, a certain aura of mystery, with songs with ’60s pop-psychedelic accents that playfully encourage a plunge into a Beatlesque past.

Moreover, the cover seems to be inspired by the Fab Four’s Rubber Soul, while “Jouer avec le feu” is a French adaptation of the Stones’ “Play With Fire”.

There’s a tasty juxtaposition here and there of sweet refrains and mischievous riffs, while the sulphurous smoke of Melody Nelson-era Gainsbourg lingers.

For its part, Anna Frances Meyer’s flute, present on several pieces, brings a breath of cheerfulness and the carefree ’60s to the ensemble: “In 1970, I will finally be able to show my thighs” (from “In California”).

It seems that one day we’ll be able to see them on stage again, where the Hay Babies’ exciting energy is at its peak. Here’s hoping.