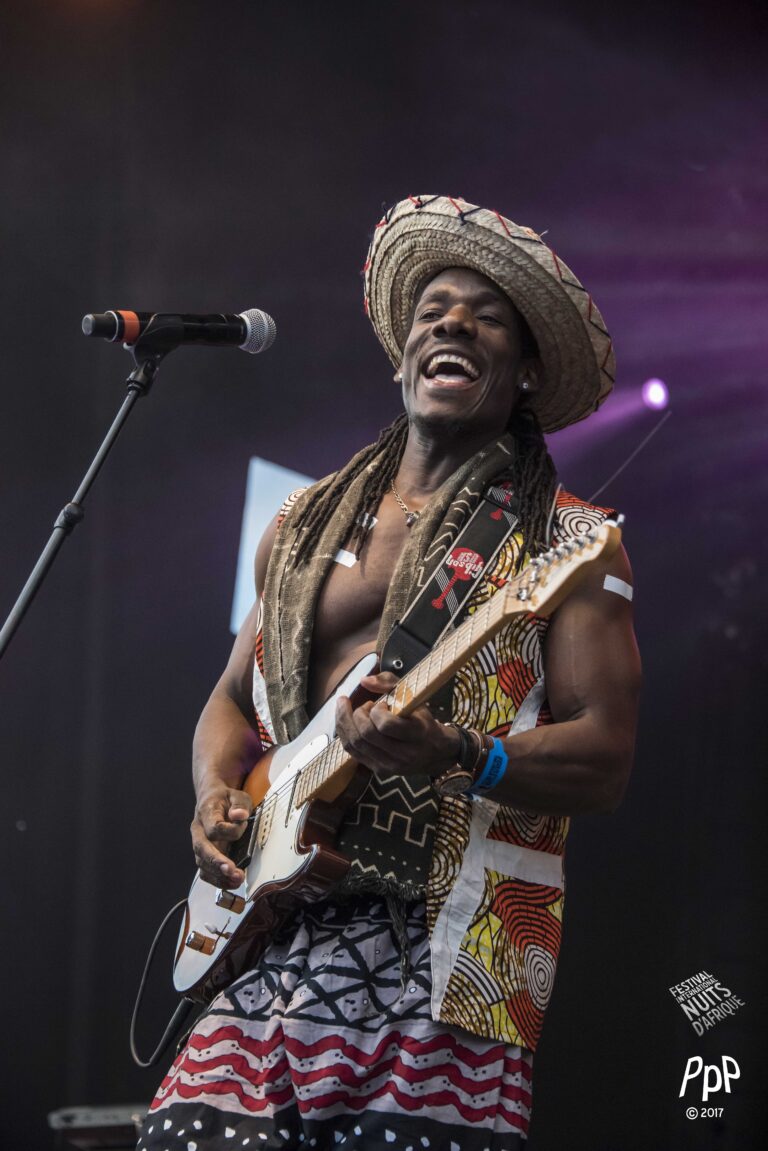 “Tradisyon”: Back to Roots for Wesli

Wesli Louissaint needs no introduction. After several prestigious awards since the end of the 2000s, the singer-guitarist has had one success after another. The producer of multiple Afrobeat hits can count on a Juno award and a Félix, in addition to a multitude of other accolades in the French-speaking world. The Montreal-Haitian artist has been working hard for over ten years to celebrate the enormous diversity of African rhythms. Continuing on his path, he is launching Tradisyon these days, in early July 2022. The album, released on the Cumbancha label, is a love letter to the vast Haitian culture that has nurtured the artist since childhood. Nineteen songs allow the listener to immerse themselves in Wesli’s fantastic world of voodoo and roots rhythms. A great album obviously deserves a great celebration: this one will take place at the Nuits d’Afrique festival on Tuesday, July 19. In the heat of the action, at the Place des Festivals, one will be able to fully appreciate the depth and diversity so important to this ambassador of Haitian culture.

In Wesli’s studio, rain and bad weather seem like non-existent ideas. With contagious happiness, he welcomes PAN M 360 to talk about festivals, music and culture.

PAN M 360: Can you summarize the path that brought you to Nuits d’Afrique?

WESLI: My career was propelled around 2009-2010. Despite the ups and downs, I made a place for myself on the national scene. One could even say on the international scene. But, before this radiation, I already collaborated with several musical groups. I was a producer, arranger, guitarist and so many other things. In 2006, I founded my own label and collaborated with a multitude of artists from all over America. This period in the background of the Montreal industry really shaped me. By learning from multiple experiences, I picked up all the baggage I needed to get where I am today.

PAN M 360: So you’re getting ready for a second appearance at Nuits d’Afrique… Excited?

WESLI: Yes, this is my second visit as a household name… but this is my third time participating. Nuits d’Afrique is where I feel most authentic. I can be a member of the large Quebec community, but also get closer to the other nation that I grew up in. By being at this festival, I feel that I can do one more step for the Haitian community. It’s rewarding to advance this cause. This event always makes me feel like I’m home and that I belong in the world.

It’s pretty exciting to be back in the festival world. With the deconfinement, this will be my second, because a few days ago I was at the Jazz Festival. But since the release of Tradisyon, this will be my first public appearance on a large scale. If you want to compare the two, the Jazz Festival is one of the biggest events in Quebec culture. It’s a gathering moment that really gives us an impressive overview of the music that can be heard in Montreal. Even if I like it a lot, it remains less personal than Nuits d’Afrique.

There, I feel better represented. I feel like I’m in Haiti as much as I am in Canada. It’s much more motivating for me. It’s as if everyone came to listen to me play at home, in my living room! It makes me want to prepare and improve much better.

WESLI: Not normally, I never put much pressure on myself. I’ve been doing my job for so long that playing music becomes second nature. I feel calm and ready to get my message out. This art is part of my life, so much so that it has become an inherent and indisputable facet of it.

PAN M 360: For this first Nuits d’Afriquede confirmed since the beginning of the pandemic, you have to prepare yourself differently?

WESLI: Oh absolutely! All post-pandemic music events have to be approached differently! You see how people need more energy. This time has taken so much of the joy out of life. With my show, I want to bring some compensation. If we have lost a lot of energy, I want to give as much as possible! I want the audience to remember the connections they made during the show. With sounds coming purely from my roots, I will work to present a personal and authentic show that reminds us of where I come from.

Musical artists may come from totally disparate cultures, but they are all united by the soul of the music. It’s instinctive and hard to explain, but it’s there. If you will, it’s the ability to know when it’s time to play louder and faster, or to have a quieter performance. With COVID, all musicians notice that the world has a need for music that moves. A need for energy and movement. So I’m preparing for a performance that will fill that need, all with a great Haitian root sound.

PAN M 360: So you will be playing a lot of your new album, Tradisyon. Why this title?

WESLI: Because this new project is rooted in Haitian and African customs that have existed since the slaves crossed over. I wanted to root these practices in song form. At Nuits d’Afrique, we’ll be hearing a lot of tradition! At the moment, I suppose the world needs a little authenticity. That’s exactly what I was looking for with this title!

In any case, it is my authenticity that I want to present on July 19th. Of course, I might make one or two forays into my other projects. I still have to give a little nostalgia to those who supported me for a long time!

PAN M 360: How long did you spend on this album? What did you want to make felt with this project?

WESLI: Tradisyon is a long pandemic project. It is the fruit of several years of work. What came out this summer is only the first part. There is a second volume that I will release in September. In addition to talking about my origins, these two offerings are an exploration of what I experienced during this period. Everything I lived, felt and observed, I put in there.

My previous album, Rapadou Kreyol, is kind of the reason why I went on this adventure. It was an exploration of many of the African rhythms that I feel are a little too neglected by Haitian youth. While I was doing my research, I made many discoveries about the richness of my culture. I realized that I needed more than an album to present the rich immensity within Haitian culture. I said to myself: OK! Rapadou Kreyol is over, but now I need to go even deeper into the authenticity of Haitian culture. I wanted to show the depth of this universe born at the arrival of the slaves. It’s an exploration of rhythms that have been forgotten for generations and also of uncharted voodoo rituals.

I always like to say that I have two hearts. One of them is dedicated to Canada; it is the society that welcomed me, sheltered me and integrated me. If I wasn’t here, I would never have had the career I have had. But I don’t forget Haiti. I have spent so much time there. I go there at least three or four times a year. I am still very much involved in the affairs of that country. Tradisyon is a celebration of those two hearts.

PAN M 360: You are generally an artist who collaborates a lot for his songs. Yet, we don’t find many guest artists on Tradisyon. Why is that?

WESLI: Well, for the first volume, I wanted a product that was more raw or authentic. For that, you have to go and find it yourself. It’s something that had to be experienced by me alone. Since the album had a more personal touch, I chose to do tributes instead of collaborations. There are great Haitian artists who have passed away recently. I wanted to remind the youth of their place in our culture. We must remember Azor Rasin Mapou and Wawa Rasin Ganga. These are people who have had careers of more than forty years. They have enriched the roots of our culture with their rhythms and songs. I should also mention the tribute I made to Eric Charles. He is one of the greatest singers of the “twoubadou” style. He made this genre known throughout the world.

PAN M 360: And will this process change for the second volume?

WESLI: Absolutely, Tradisyon II, I see it as the arrival at the victory line! There will be a lot more collaborations and featurings. You’ll see it all in September! I’m not going to go on too long to keep it a mystery. However, I can say that if the first part touches more the roots of the Haitian music, the second will go in a more modern style.

PAN M 360: And after this second album, are there any plans for a vacation?

WESLI: No, not really. I am already preparing several shows and tours throughout America and Europe. I want to share my music with the rest of the world. In the meantime, Quebec will be able to enjoy Tradisyon for a little while. I’m not the only musician who will say that. We live from recognition and work. When you produce a work, you feel accomplished and valued by society. In busy times, you don’t feel as tired. I don’t need a prize or money. I need an instrument and an audience. The connections that are made through music, that’s what matters.

Wesli will be performing on the TD – CBC stage on Tuesday, July 19th at 8pm. FREE!