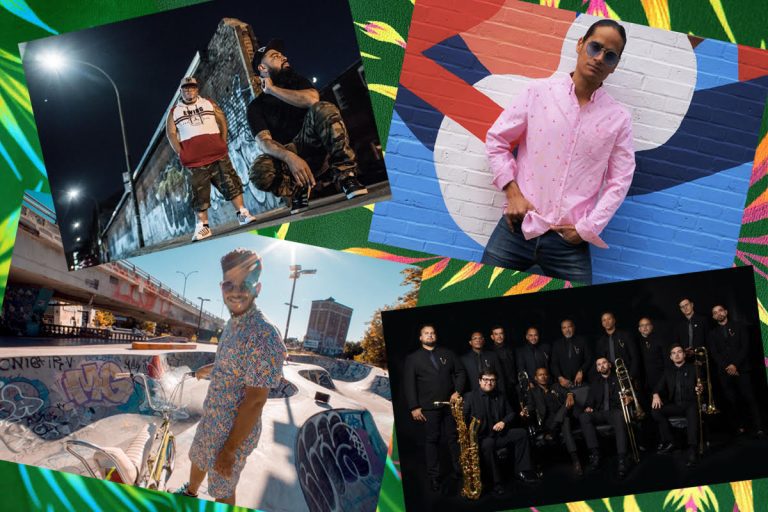 After too long a wait—the inaugural edition was in 2019, and the of course the pandemic happened—the Norté Tropical is back at last, and then back again. The 2021 edition makes up for the missing year with two nights, each distinct in its sounds yet both following an exciting formula. The soirées are overseen by Boogát, a Latin-music leader in Quebec—a rapper, singer, DJ, producer and radio host, though he’ll be doing little of any of that, as artistic director, truly a task for an octopus what with the incredible array of local Latin talent on hand, in all aspects of the productions. PAN M 360 connected with self-described “Mexicanuck” Boogát, aka Daniel Russo Garrido, for a painstaking review of everyone involved in the wild weekend ahead.

PAN M 360: What’s the overall theme or intention of the Norté Tropical shows?

Boogát: The intention is to celebrate the incredible Latin music scene that we have in Montreal right now, and that has been blooming in an unprecedented way recently. This year, Norté Tropical is two nights, but we could have easily—with the right budget—done four or five nights with the talent that is around, and I don’t think that this—the amount of quality Latin music projects in Montreal right now—ever happened before. The point of Norté Tropical is to create unique shows with two Latin bands that merge into a monster ensemble for the last set of the night—that’s the trademark, the descarga/palomazo and live collaboration aspect of it, with an open-minded, inclusive and diverse spirit.

PAN M 360: The first night’s focus appears to be South American sounds – cumbia, champeta, reggaeton – crossed with hip-hop. What can you tell me about the two main acts, Sonido Pesao and Ramon Chicharron, and their special guests for the evening, Baby K, Noé Lira and Elo Sono, and of course DJ Pituca Putica?

Boogát: Sonido Pesao are good friends of mine, I had the chance to co-produce their last record Todo Revuelto. They’re Montreal’s Latin-scene OGs, veterans, respected, active and involved in the community. Their main composer, Ian Lettre, is also part of the Japanese psychedelic surf rock band Teke Teke. Loopy Monster, their bassist, is a great finger-drummer on the Maschine pad, and also involved with Loop Sessions. Luny and Chellz, the vocalists, are involved in the label Norté Rec and used to be in Heavy Soundz and other great projects. They have a killer show that has a feel of Rage Against the Machine mixed with Cypress Hill. I love their music.

Ramon Chicharron is a Colombian from Medellin who immigrated 10 years ago and played every week at l’Escalier, that alternative bar at Berri-UQAM, for almost six years straight. He’s now blowing up provincially, with an ADISQ nomination, and nationally and internationally with his last record Pescador de Sueños which I also produced. His music and show are elegant, modern, dancey, romantic and sensual but without the kitsch aspect of those last two. A crowdpleaser.

Baby K is Chellz’s sister, one of the greatest Spanish rappers to ever touch a mic in Montreal, some kind of Salvadorian Lady of Rage (The Chronic). Noé Lira is a multitalented artist, a really good actress and an incredible dancer who’s also starting a music career. There’s a chill Lhasa feel to what she does with a happier, younger, refreshing twist of the new generation to it. Elo Sono is one half of El Son Sono, a group she has with her brother, the great guitarist and singer Tito Sono. She has a smooth, beautiful, raspy and smoky voice that can remind one of Alejandra Ribera. Of Québécois and Peruvian decent, she brings that Andes feel to our scene that is mostly Caribe. Finally, there’s Pituca Putica, also of Peruvian origin, from the new generation, a really cool DJ who is part of the new international Latin-urban scene, dembow, digital, neo-perreo, reggaeton, etc.

PAN M 360: The second night leans to the Central American, or rather the Caribbean. You’ve got Andy Rubal’s Cuban sounds, and the Nuyorican salsa of Lengaïa Salsa Brava, joined by guests Esmeralda, Noderlis and Stéphanie Osorio, and DJ Zarah Kali in between.

Boogát: The second night leans towards the most popular sound of the Gran Caribe: salsa. Andy Rubal is originally from La Habana. He’s the greatest salsa pianist I ever had the chance to work with. He’s been a great showman since his early childhood, when he was performing with the band Baby Salsa. He recorded several of his records at the EGREM studios (Buena Vista Social Club), then fell in love with a Montrealer and is now right here, working a lot, always inspired, prendido. His music is really Cuban, timba-oriented… ¡Un vacilón!

Lengaïa Salsa Brava is a milestone in Montreal. To my taste, the best salsa band to perform their own material, not covers, in Canada. They’ve also been the backing band for some of the greatest salsa artists in the game, including Ismael Miranda and Yoko Mimata. They’ve been nominated for the last Junos, and are signed to Toronto’s Lula World Records. They’re 12 in the band, it’s big and loud and powerful.

Esmeralda is a really talented singer and guitarist with a crystal voice who toured a lot with Samian and was around Montreal’s hip-hop scene in her beginnings. She leans more toward nueva trova now, performing her own compositions. Noderlis is a great Cuban singer, involved in the show Fiesta Cubana at NAC last summer in Ottawa. Great powerful voice, the real deal. Stéphanie Osorio is the main singer of the Colombian music band Bumaranga, which explores Afro-Colombian sounds. DJ Zarah Kali is the woman behind Provoxmtl, a really cool multidisciplinary space that also streams shows, and she also happens to be an amazing old-school salsa and cumbia DJ.

PAN M 360: The visual aspect of these two soirées is very developed. There’s a VJ, Eli Levinson, lighting design by Chele, the photographer Carlos Guerra, and overall mise en scène care of Carmen Ruiz. How is that side of things shaping up?

Boogát: It’s shaping up great. I don’t think we can do big musical events in 2021 without thinking about the visual aspect of it. The idea is to do something tropical but northern at the same time. We’re lucky that we have a lot of talent right here. Carmen Ruiz is the artistic director for Gypsy Kumbia Orchestra. They have crazy shows. Having Carmen to do the mise en scène was just natural, she said yes right away. Same for Eli Levinson, he’s one of the hottest music producers in Montreal with his project Oonga, but also happens to be a kickass VJ too. He did amazing visuals for Afrotronix’s last tour and he was part of the first Norté Tropical night back in 2019, so it’s just a natural fit to have him doing that. Chele is my favourite MC but also a great tech who studied lighting. We do a lot of projects together so having him designing the lights feels like home.

Carlos Guerra and myself became friends after a trip to CDMX and Oaxaca back in 2017 to film two videos for mySan Cristobal Baile Inn record. Since then he became one of the most prolific video directors in Québécois hip-hop, also shooting for French artist Kaaris and winning a Gémeaux prize—the Oscars for québécois TV shows—for theCannabis Illégal documentary in collaboration with Simon Coutu for Vice, he even acted in a movie recently. He just never stops and has the best eye around. We’re blessed to have the privilege to all work together for two nights, makes us all proud. Everybody is really talented and respects each other as artists. Feels increíble y inspirador.

PAN M 360: I was going to ask, why aren’t you yourself performing, or even just hosting – it’s Elkin Polo from CISM who’ll be the MC for the nights – but I imagine as artistic director of the events, you’ll have your hands full!

Boogát: I think Elkin Polo will have way more fun than myself MCing both nights, and the more fun someone is having on stage, the more fun to watch and listen. He’s been doing his radio show nonstop since 2013 and has hosted several events, so he’s the man for the job. I’ll be dropping verses here and there both nights, though. This Norté Tropical thing is like doing features without going to the studio, creating the excuse to work with people I appreciate on an artistic and human level. But to answer your question, yes, it’s a lot of work to do this, but it’s beautiful to come together to do something we all love, live Latin music, and celebrate our heritage with pride.