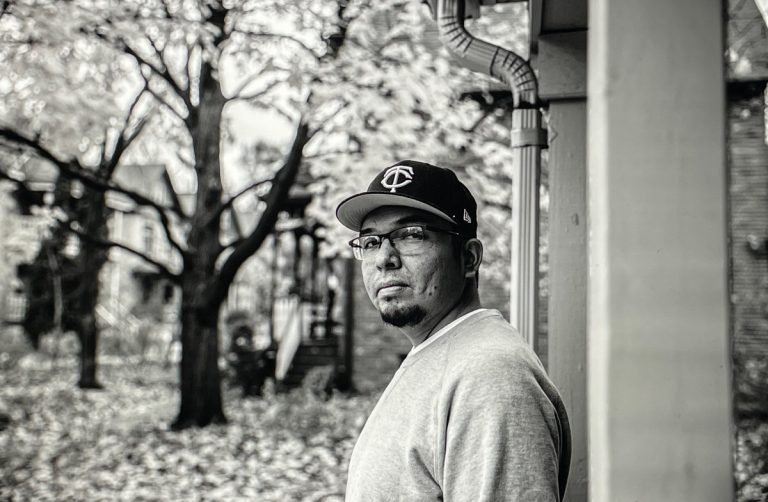 Clearly, Niineta is one of the most significant recordings from contemporary Aboriginal culture. The slow, dramatically heavy rhythms and organic linearity of this cohesive ten-piece journey represent a milestone of the sonic landscape portrayed by artists from North America’s first peoples.

Vocalist and producer Joe Rainey has taken a major step forward: his native values of meditation and contemplative connection with the universe are matched by an uncommon electronic language. Ambient, dub, industrial, techno and post-minimalist music all merge into a another kind of pow wow.

The traditional song of this Ojibwe artist is thus inscribed in a new context, at the same time concerned with the oral tradition and a dizzying leap into the present and the future. The digital world becomes a perfect complement to the expression of this artist who is concerned with updating the musical legacy of his ancestors.

Since Joe Rainey is on the same program as Tortoise this Saturday, in the context of Pop Montreal, PAN M 360  reaches the artist at his home in the Green Bay area, Wisconsin.

We’ll be talking mainly about the excellent Niineta, co-produced with his colleague Andrew Broder, electronic musician and producer from Minneapolis. Let’s remember that the album was released last May under the 37d03d label.

PAN M 360: This is indeed evident in your deep interest in electronic music and other experimental forms. At the same time, it’s impossible to say that you are not close to your roots.  Wow!

JOE RAINEY: People might reduce my work to pow wow music singing with electro beats but… it’s actually something I’m very proud of. The musical fusion that took place with my friend Andrew Broder is original compositions on my part. They were done by listening to what Andrew Broder sent me as he went along. So I sat down in the same place I’m talking to you from, and created each song you hear, molded into the beatmaking that Andrew suggested.

JOE RAINEY: Thank you! But at first, you know, I didn’t intend to make it public. What you heard was going to be a personal project. But towards the end of that process, I started thinking about who I was as a contemporary Aboriginal artist. And if I had something to say, it would be exactly that. So I wanted to go towards that, with everything that was behind me, everything that I knew about my musical culture and that had come before me.

PAN M 360: You mean your personal life and culture are the foundation of your music.

JOE RAINEY: Yeah, I didn’t do that on my own, it’s just the idea I had in my head that you hear. So I wanted to express that idea somehow and I had a friend who helped me.

PAN M 360: There are now some indigenous artists involved in new forms of music, instrumental or electronic, but we don’t really know of any other ambient music like that! Also, music with refined harmonization as you suggest is rare.

JOE RAINEY: Well, some church music in the indigenous culture has harmonies, so it’s not that new. However, I was not inspired by this music…I can also point to some pow wow songs as being harmonies. And when Broder said to me “Hey, do you know you have any?”, I said “No, I didn’t know”. And some of my takes ended up harmonizing naturally, with the help of my colleague.

PAN M 360:How would you describe what came to mind in doing this important work?

JOE RAINEY: Collaborating over the last five or six years with different artists that have been sampled, it kind of created a space in my mind for that creativity to flourish. During that creative time, I was also listening to indigenous experiments in electronic music, A Tribe Called Red for example. So I think that all of that just kind of clumped together in my mind. And then it all came out in my 40s, just with the ability to have that time to really internalize. Everything I did on this album was done during the quarantine, in this room, with these instruments and computers.

PAN M 360: Before the pandemic, what were you doing? We didn’t say it was totally different, or that you were electronic producers who sang.

JOE RAINEY: I’ve been a pow wow singer for quite some time. I’m also an archivist. I harvest, I compose, I record, I sing. Plus, I have a day job because I have a family to support. But I’ve been lucky enough to meet people through music, it’s really opened up my musical side which has always been there my whole life. So this album is the culmination of all these years of work, research and meetings, I may have created my own thing.

JOE RAINEY: I use archives from all periods from the 1940s on.  I know someone who has them all, so I can work with that material.

JOE RAINEY: You know, I’ve had a few conversations where he’s been introduced to me. The album that he did, it’s very beautiful, very well done. But until recently, I didn’t know that. And it’s right up my alley.

JOE RAINEY: Andrew Broder and I perform as a duo. We’ve known each other for a number of years, we’ve done things together before this album. And he left the door open for me to ask him for help. So I asked him to help and he was involved in the whole process. He’s the other half, he’s more responsible for the production, and I’m responsible for the vocal side.

PAN M 360: Are you also involved in the production?

JOE RAINEY: Oh yeah! A lot of the samples you hear are my samples, so I co-produced it, exchanging information and music throughout the quarantine and it was never a difficult process, never a difficult process to work with Broder, just because it was so natural.  Broder sent me a long series of beats and sounds. I had to think about what I wanted to sing and what I wanted to convey. It was like each of us defining the other’s phrase.

PAN M 360: Is there an audiovisual proposition to your concert?

JOE RAINEY: Not exactly. We try to let everyone experience the music, determine the meaning. Just through sound, we wanted people to go through a lot of emotions, whether it’s happy, sad, scared, soft or loud.  We just wanted people to be completely immersed, to really feel what they hear, more than what they see.

PAN M 360: Would you agree that your work can also be trance-like or meditative?

JOE RAINEY: That’s the way I’ve thought about it too.

JOE RAINEY IS PERFORMING AT RIALTO THEATRE ON SATURDAY, 8:30 PM, OPENING FOR TORTOISE