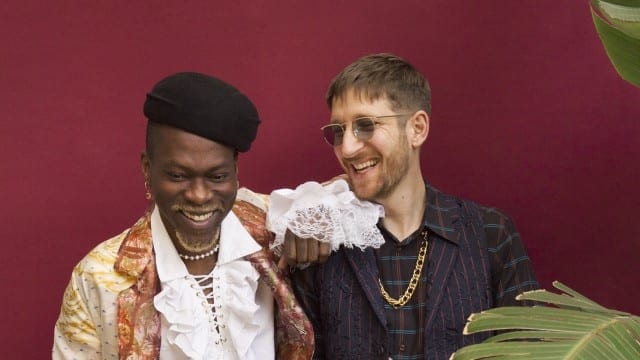 Pierre Kwenders teams up with Clément Bazin, and the co-pilots imagine a global flight plan for Classe tendresse.

Pierre Kwenders’ international career regularly takes him to Europe. His many Parisian stopovers have been punctuated by an artistic collaboration with Clément Bazin, electronic musician, songwriter, and percussionist by training. In addition to his solo projects, which keep him very busy, Bazin was notably part of Woodkid’s international tour a few years ago. Together, the Parisian and the Congolese-Montrealer planned an intercontinental flight on Classe tendresse. It’s a bird’s-eye view of the landscapes these two citizens of the world create, revealing their respective journeys through this EP, with remixes, on the Bonsound label. Pierre Kwenders sums up this trip in all courtesy.

PAN M 360: How did you get to know Clément Bazin, to picture Classe tendresse together?

Pierre Kwenders: My manager had met him in Montreal when he performed there, and told me about him. I finally met him in France two years ago. He then invited me to his studio, made me play some sounds I liked, and I came back to Montreal with them. At first, they were tracks to work on my next album, and… Clément and I worked together again later, when I went back to Paris. The connection came very naturally, after which we thought, why not release an EP together? All the songs were recorded there, when I was working with Moonshine or for my own shows, we always had a session. The last one was recorded in February 2020, just before COVID. The EP was for all intents and purposes finished, we added three remixes of the four songs to the program. Time and circumstances finally worked in our favour.

PAN M 360: Except for the percussion aspect, isn’t this duo EP in the same spirit as your solo work?

PK: Absolutely, my identity is there. But in a tandem project, we have to find each other! I didn’t want to take up all the space, I wanted Clément to bring his flavour and identity too, and that’s exactly what he did with the steel drums that are on almost all the songs, except the song “Ego”, surprisingly. That’s really what attracted me to his work, this love for steel drums and Afro-Caribbean culture. At a very young age, Clément became interested in steel bands, and today he plays them very well. Incredible, this instrument! We agreed on this interest in Caribbean culture, which I naturally like, given my African origins. The steel drum was invented by musicians from Trinidad. This creativity of underprivileged artists also exists in my native Congo, and groups like Kokoko!, Fulu Miziki, Staff Benda Bilili, or Konono No. 1 play instruments they built themselves. I think it’s wonderful. The impossible can become a possibility, that’s the beauty of the human being.

PAN M 360: You sing in Lingala and French, your music has elements of Congolese rumba – your cultural heritage is once again resurfacing in this new EP, isn’t it?

PK: As they say, you can take me out of the Congo, but you can’t take the Congo out of me! To use another well-known expression, I fell into Congolese rumba when I was a child. When I started music, I wanted to do Congolese rumba, but I also wanted people to understand where I came from. For example, ewolo is a dance from the ’90s, from the group Zaiko Langa Langa. For me, the song “Ewolo” is a way for me to pay tribute to this group that I loved when I was 10 or 11 years old. We used to dance to it at family parties. I also remember my mother’s 35th birthday, it’s a childhood memory that I wanted to share. In the same song, there is also an extract from a street song that my parents themselves used to sing when they were little. It’s imbued in me, it’s part of who I am, and I’m happy to share it.

PAN M 360: Can you elaborate on the beatmaking on the EP?

PK: I had nothing to do with it! I gave Clement the freedom to take it where he wanted. The beats at the start were the result of his ideas, then I worked with him, suggesting that he extend such and such a sequence, and son on and so forth. He took up my idea and told his own story through composition and direction. He had ideas, so I could add things here and there. Clément and I inspired each other. And everyone brought what they could bring to the final product.

PAN M 360: Was there a common goal from the outset?

PK: The basic idea was to make people dance, and touch their emotions. While writing this project, I myself was living important experiences in my life, I wanted to talk about them, but not in sadness. I also did “Ego”, a song in homage to Africa, which I had never done before. It’s also a nod to the Ivorian coupe-décalé style that I’m a big fan of, and also to DJ Caloudji’s song “Sentiment manquant”.

PK: Yes, I wanted to pay tribute to Africa for the good things, for the big cities that see the birth and growth of so many artists, some of whom are becoming international, from Youssou N’Dour to Burna Boy, via Franco and Manu Dibango, whom I name and who left us during COVID. I wish he could have heard it! In Congo, for example, electronic music is becoming very present in the big cities, without dislodging rumba and soukouss for all that. It’s all part of what I like to do, which is to travel and pass on my culture, to make people even more curious about Africa beyond my own music.

PAN M 360: What about the next Pierre Kwenders album?

PK: It’s coming out in 2021, and what’s in Classe tendresse is not at all the material for the album. This EP is a nice interlude with Clément. It gives me great pleasure that this project can see the light of day, and that I can share it with my audience before looking to other horizons next year, after having worked with Clément Bazin and, before that, with Ishmael Butler from Shabazz Palaces.