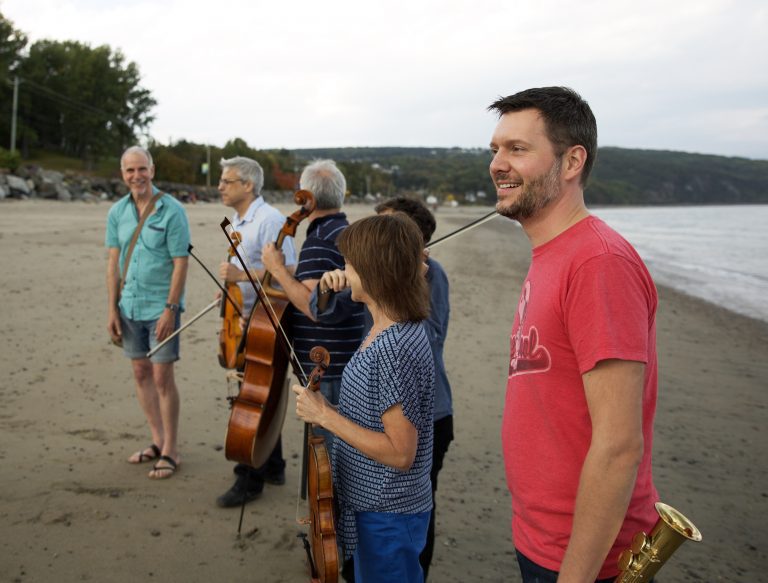 This has been said since the 1950s: the more demanding music tends to come together over time. Thus, the Western classical school is gradually opening up to other currents, and contemporary jazz is certainly on the shortlist of alliances. Except for the most narrow-minded, it is now common to appreciate a classical musician integrating themselves into a project involving improvisation, or to hear a jazz musician exploring the repertoire of written music of the Western tradition.

This is certainly the case with Philippe Côté, who takes the stage at the Off Festival de jazz de Montréal in concert with American pianist Marc Copland and the Saguenay Quartet. Chamber music and jazz go hand in hand in the imagination of the Montreal artist, as will be demonstrated on stage this Saturday, October 2, and on disc on November 5: the works Bell Tolls Variations and Fleurs Revisited will be performed during the festival.

Saxophonist, clarinetist, composer, arranger, conductor, Philippe Côté is currently completing a doctorate at McGill University under the direction of John Hollenbeck and is also the coordinator of the McGill Conservatory Jazz Program, which is part of the university’s community school. In addition, the Montreal musician has received numerous awards, including grants from the Canada Council for the Arts and the Conseil des arts et des lettres du Québec. He has composed for orchestras and chamber ensembles such as the Orchestre national de Jazz de Montréal, the Winnipeg Jazz Orchestra and the Ensemble Paramirabo.

All reasons to justify this exchange with PAN M 360.

PAN M 360: How were these works conceived?

Philippe Côté: The Bell Tolls, the piece by Marc Copland who I think is a great jazz pianist, was complete in itself before I worked on it—recorded in 2009 with drummer Bill Stewart and bassist Drew Gress. Originally played as a trio, then, this piece is very well constructed, super rich, very subtle. This is a respectful recomposition of this piece; I don’t transform it too much, I bring it a more classical dimension, very tonal even if contemporary. For Fleurs Revisited, my own piece, I allowed myself to explore jazz and contemporary music more, while remaining influenced by today’s popular trends. So the sound design is more contemporary.

PAN M 360: What about the choice of instrumentation?

Philippe Côté: The idea of this project was to compose and arrange for a string quartet, a piano and myself on bass clarinet and soprano saxophone. I didn’t choose a double bass or drums, this was intentional, these elements are nevertheless in the music. So I decided to make chamber music without denying my musical nature; I like jazz, rhythm, percussion, groove. The idea of this instrumentation is based on the idea that it can work acoustically in the context of chamber music built on jazz pieces. In contemporary jazz, piano trio and string quartet projects are often dominated by drums and bass, to the detriment of acoustic balance. In the case of these revisited works, the jazz side of the affair is represented more in the improvisational sequences and in some of the grooves than in the orchestral construction per se. The written material stimulates the improvisation, in fact.

PAN M 360: However, the strings don’t really improvise. What is their role?

Philippe Côté: The strings do not improvise but they are not relegated to the role of wallpaper at the service of the soloists, as is too often the case in jazz. Since there are no drums or bass, the strings are at the heart of the music, they are an integral part of it even if I don’t ask them to improvise or do other things they don’t master.

PAN M 360: You chose the Saguenay Quartet, why?

Philippe Côté: The Quatuor Saguenay is a very nice ensemble that has a very nice sound.  Initially, the demo of the project was recorded with musicians from McGill, but then I wanted a permanent quartet that has a real sound. And I really liked the sound of the Saguenay Quartet, whose first violin has been replaced since the recording—Laura Andriani has been replaced by Marie Bégin. Luc Beauchemin, viola, Nathalie Camus, second violin and David Ellis, cello. Super nice people! This music was first recorded in a studio in 2016, I wasn’t happy with the result so I re-recorded it in a concert hall, at Domaine Forget in 2017, after which I led several other projects, the pandemic delayed the public release.

PAN M 360: What are your other projects?

Philippe Côté: I have another project in progress with François Bourassa (piano) and Jacques Kuba Séguin (trumpet), another in duo with François Bourassa and also a commissioned work for April with the Canadian National Jazz Orchestra in Calgary, which will be conducted by Christine Jensen. I am also a conductor for different ensembles. So… during some phases I play more, compose and conduct more during other phases. If I have to put a number one?  I’m more of a composer than a player, but it’s all connected.