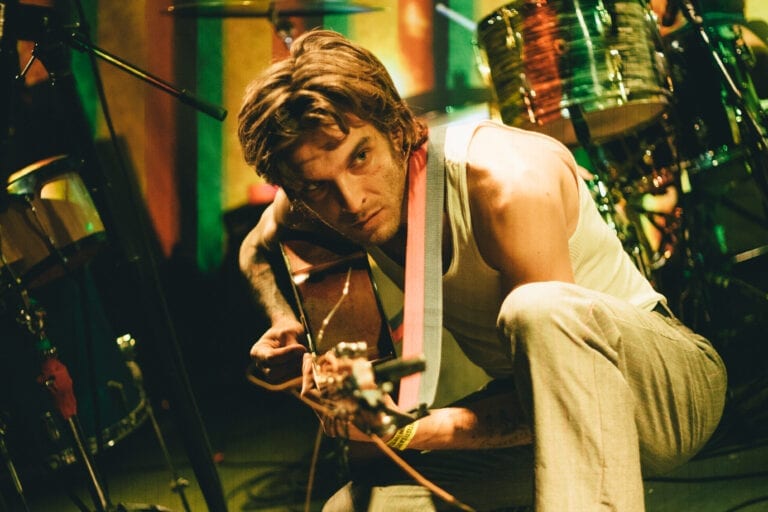 Paul Jacobs: Sole master on board

On the eve of his streamed concert at M For Montreal, Paul Jacobs talks about his next album, the one after that, and his other passions, illustration and drawing.

While Paul Jacobs often finds himself surrounded by several musicians on stage, it’s all by himself that he enjoys composing, creating, and recording his music. Just as adept with drums (we saw him behind the kit with Pottery), guitar, keyboards, and mixing console as he is with drawing and animation, the Windsor musician, who has been exiled in Montreal for the past few years, presents his eighth album on stage as part of M For Montreal. While waiting for the record, which will be released sometime next year, he unveils “Thanks”, a first track from the Sounds From Mothland Vol. 1 compilation – the crew behind the Distortion festival, among other things – for which Paul Jacobs illustrated the cover.

PAN M 360 took a virtual meeting with this prolific and versatile artist, in his home studio.

PAN M 360: You have a rather atypical background. From drummer for metal bands, you ended up in a one-man garage band, then singing and playing guitar with seven or eight people on stage in a kind of psychedelic noise supersonic maelstrom.

Paul Jacobs: I was playing drums in a lot of metal bands. In Windsor, where I’m from, there were a lot of metal and hardcore-punk bands. So I didn’t want to play such crazy music all the time and do stuff like the Beatles, play drums like Ringo Starr and stuff, so I just decided to learn guitar in 2010, I guess. And then I just started making songs from there, stuff I kinda like more. But drums are my main instrument, so when I started Pottery, it was mostly because I wanted to play drums again.

PAN M 360 : You’ve recorded a lot of demos over the last few months, some of which were used to create your forthcoming album…

PJ: I’ve just finished an album and I’m starting the next one because I’ve got so much time at home. I play and I record here, whenever I want.

PAN M 360: We already know quite a bit about your next album, which will be released on the Montreal label Blow The Fuse in 2021, but we can’t reveal everything. Top secret! So, without risking revealing too much, can you tell us more or less what it will consist of?

PJ: Sure! My last release was from two years ago, I think. I feel I kind of went through a transition period with the music I wanted to make – something less crazy, a more defined sound, something recorded a bit better. I recorded this album with all the exact same gear as my other albums, but I focused on mixing a lot better, going for more clarity and less noise. In between this new album and my last, I was more into folk and I started off writing a lot of folk songs but then, as time went on, I brought in a lot more of the psychedelic stuff, like the synths, the drums, and other stuff. So it’s like a mix of folky-type songs and psychedelic rock ’n’ roll kinda stuff. It was good that I took that little break because it helped me figure out where I wanted to go, because if I had not done that, I would have ended up releasing a folk album.

PAN M 360: So like your other albums, did you do everything by yourself or did you have a little help this time?

PJ: No, I just did it by myself, like I did all the other ones. I also did the recording and the mixing here at home, but I got the mastering done by Oliver Ackermann from Death By Audio/A Place To Bury Strangers.

PAN M 360: Since it is different from the previous ones, what were the sources of inspiration for this album?

PJ: The reason I wanted to change the sound is because of the animation videos I make. I find that it’s easier and better to make videos for songs that have more emotion, instead of punk songs. You can put more feelings in them. I also listen to more stuff like Cass McCombs, Kurt Vile, things like that. So I wanted to make songs that are closer to that. I also listen to a lot of Gene Clark, the Byrds, Tucker Zimmerman, especially in the way that this guy writes lyrics… Folky stuff like that, you know?

PAN M 360 : So did you first build the album by imagining videos or pictures?

PJ: A little, yes. That’s what pushed me to change my sound. I was looking to make music that would be more in line with my style of drawing, which would be easier to illustrate. Something that actually corresponds to what I listen to when I’m drawing.

PAN M 360 : You’re still in charge of illustrating your covers and making your videos, aren’t you?

PJ: Yes, but I worked with other people for some clips. I do all the animation, though. I think the music and the illustrations should mix with each other, I always try to merge the two. It’s my passion project if you want, making music and drawing, that’s all I want to do and now I have the possibility to do both, and to bring them together. Plus I can do it all from home, which is even more fun. I also did the cover art for the Mothland compilation, the Pottery album and the videos, and also a video clip for Elephant Stone… I like to work on other projects, it’s kind of a challenge I give myself, trying to do something that’s not too much me, if you know what I mean. I also make some t-shirts for different bands. But when it comes to making animation clips, I get offered to do it from time to time but it’s really much too time-consuming, it’s a bit crazy. I prefer to spend that time doing stuff for myself.

PAN M 360 : You said earlier that you are already working on another album? Would you like to tell us about it ?

PJ: It’s going to be pretty much in the same vein as what I’m listening to at home right now. I want to make music that I would like to listen to at home. And again, it’s pretty much drum-based. The drums are really present and I’d like to do something a little bit darker, in a way. Something more serious, more dreamlike but darker. No dream-pop but more like a weird dream thing, you know? It will be quite different from the record that will be released on Blow The Fuse, the production will be better, I think. With each album I’m getting better at producing, with the recording techniques and all that. It’s going to be the best I’ve done so far in terms of production I’d say; I’ve got new mics, new interfaces…

PAN M 360 : What kind of concert will you present at M For Montreal?

PJ: I’m doing roughly the same show I gave at the last Taverne Tour, but with six musicians instead of seven. It’s pretty sweet. I play mostly songs from my next album and a track from my previous one, Easy.

PJ: Not much, to tell you the truth. Because we can’t tour, everyone went back home. I would say the band is on a break right now. The band is not dead, a band never really dies! Everybody’s just taking a little break, that’s all. There are bands that can’t work if there’s not a tour, if there’s not something to put some wood in the fire.