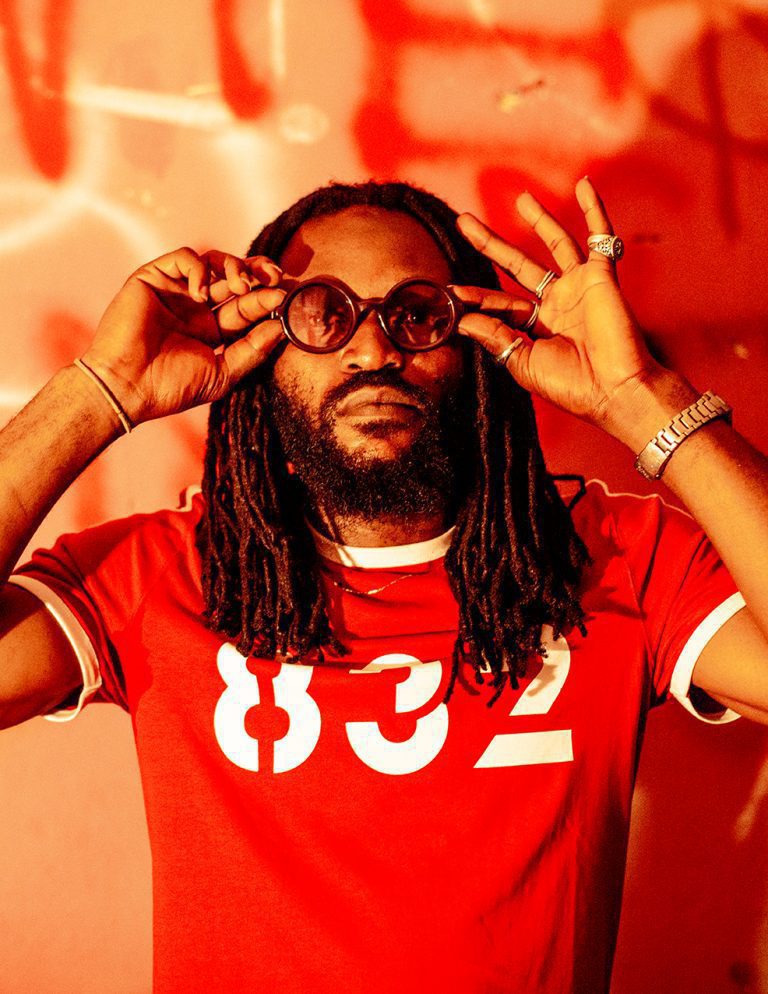 Obi Bora: Across the desert and…

There could easily be a film about the life of electro hip hop/afrobeat artist, Obi Bora. At age 23, the man chose to escape his home country of Nigeria, a place at the time plagued by violence, and lived a life in exile, wandering the desert, enduring hunger and thirst and fleeing the bandits who chase migrants.

Obi travelled through Morocco and found himself in Spain, bouncing between refugee camps until he reached Switzerland. He was then thrown in a Swiss prison twice for not having immigration papers. In prison Obi met a man who invited him to France. Out of options and doubt, Obi showed up in Lyon, France—his home to this very day.

Through all of this, Obi was slowly writing songs about his experience. This September he released his debut LP, Black Prayers, hip hop/afro-beat tracks sung in English, French, and Igbo, that were originally composed on his laptop while he lived in squat houses. After finding multi-instrumentalist, Cédric de La Chapelle, Obi recorded Black Prayers, and started gaining traction in France and Europe.

A few years ago, Obi had never played live on a stage and now he is touring through France, playing shows with hundreds and thousands of people. He never dreamed of playing music professionally, but now he knows nothing else. As he says, he chose music to be his “last territory.” Obi had some time to chat with PAN M 360 about his musical journey while on tour in France.

PAN M 360: How are you Obi? Did you ever dream of touring in France?

Obi Bora: (laughs) All I can say is thank god. We are doing our best and it’s my first tour ever. Everything moves so quick and nobody knows what happens tomorrow. We all have to work on our belief and be ready for anything that comes our way. Life is about being ready. I never believed I would ever tour, but it came and I’m happy for it.

PAN M 360: Just learning about your story, it seems you’ve done enough travelling for a lifetime?

Obi Bora: Yeah I can say that I’m tired. I’m tired of moving from place to place. I just want to move with my music. I can’t be running up and down anymore. I’m not getting any younger. Now I’m just smiling about the opportunities I have now.

PAN M 360: So back then you basically had to escape Nigeria?

Obi Bora: Yeah (long pause) I hope you understand what you mean by escaping because if you see what is going on in Nigeria now you know it was really escaping. If you watch the news you know that Nigeria is like the oil in the frying pan. Everything is burning, but Nigeria is ok. It’s all finished.

Obi Bora: Back then everything was underground. If anything would happened to you nobody would talk or say anything because if they did, something would happen to them too. Now that is over. Nobody is arguing anymore. Everybody disagrees with the government and they are still killing. The government recruits the army to be killing. Killing is not a job. It’s easy with a gun. You can go and pop pop pop and people are dying everyday. I really survived in Nigeria and thank god. I like your statement about escaping, that is what I want to say from now on.

PAN M 360: You can keep it! And when you were in Switzerland they threw you in jail because you didn’t have papers. How long were you there?

After I got out the first time I thought ‘OK you can’t take your time for granted.’ I struggled to make the money to go to France because my friend invited me. I wanted to make money so I wasn’t stressing anybody out when I go to France. So after I tried to make some money they arrest me again. So I’m in jail again and I meet a guy who tells me how to raise funds in prison. So I start working in the prison to save some money and he says you should come to Paris if you’re making music. It all went very fast and I said OK and I added him on Facebook. He got released and two months after I messaged him and met him in Lyon. And that’s how I’m living in Lyon now.

PAN M 360: And when you first started making music on your laptop did you think about releasing it to the world or was it just a project for you?

Obi Bora: Well the first time I started to live in France, I didn’t have a place to stay. My situation was very tough and I had some challenges that other people that make music, people like DJs or songwriters, didn’t really have. It was kind of like a fight for myself. So I kind of had to make the music personal because lots of people would say ‘Oh you can’t do this’ or ‘He can’t do this.’ I proved to them that I could do it and it had to be personal.

PAN M 360: And many of the songs on Black Prayers are about the migrant experience and also Black Lives Matter. So now that you’ve released the album has it kind of taken on a new meaning?

Obi Bora: Yes. To my people where I started this … it’s for my Black friends because we were like 500 immigrants in the squat a day. With no documents, no houses. I just looked at our situation and felt bad. So I had my laptop and my microphone and I write something like “Slave We” for them. And them something like “Light ‘N’ Darkness,” because it was all about that experience and that passage in time of what I was going through. I felt like I needed to motivate my brothers and my colleagues. Music is all about what you have and you don’t have to think that someone else is better than you. You have to dig yourself out. I did the songs to prove to my people to prove to myself because it was not easy for me. I want people to feel that in all the songs. I want them to feel like they are part of my soul, you are in my shoes.

PAN M 360: Did you know what you wanted the production of the songs to sound like from the beginning? There is like afrobeat, reggae, dub, hip-hop and trap with your rapping.

Obi Bora: So these days it’s a different type of afrobeat. It’s not the same as the 1990s and there are different types of trap music too. Like there is just a different sound of Afro music in the market and it’s very good. Like I don’t know if you’ve listened to somebody like Burna Boy. I knew I wanted the some of the afrobeat sounds, but I couldn’t do it myself. I just started with what I had on my computer. I had my sample beats on Logic and I couldn’t wait for someone to give me the instruments that I wanted, but now I want to go with this new king od afrobeat sound on the market.

PAN M 360: So maybe later on you wont be using only Logic but actual instrumentalists in a studio?

Obi Bora: Yeah this is what I prefer. The first time I went to a studio and saw it being done. I had the idea OK even if I can’t go to the studio because I don’t have the money to be paying the producer, maybe one day I will be able to work on something in the studio.

PAN M 360: Did you play music in Nigeria at all when you were growing up?Obi Bora: Yeah but it wasn’t my own music. So i heard 2Pac’s “Do For Love” so I said ‘OK I will sing it. I will sing it like I’m the one who wrote it.’ I was like 14 and then I eventually switched to my own music and I showed it to some of my brothers and they started laughing (laughs). But life is life and you are what you want in life so I kept going. There’s never the wrong time to start doing what you love. Look at me I’m from Africa and I’m doing it. It is what it is.