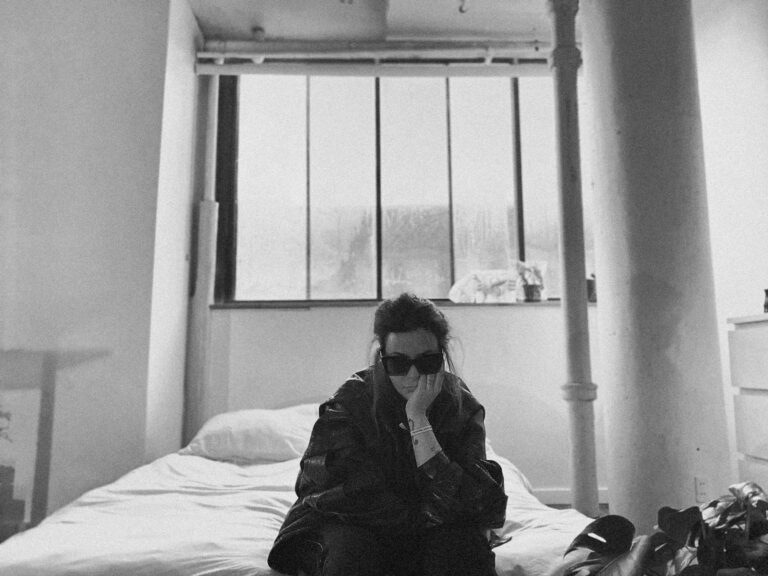 MUTEK 2022: Liliane Chlela on her electronic illustration of good versus evil

The year 2020 was one of the hardest and most chaotic that DJ/producer, Liliane Chlela, had ever experienced. Beirut, Lebanon, where she was living, was constantly subject to anti-regime protests, eventually leading to a port explosion that has still not been investigated. “You were constantly thinking ‘Is this the day I’m going to die,” Chlela says over a computer screen.

Liliane Chlela eventually moved to Montreal and released her Safala album last year. This dark and dystopian piece of industrial, droney, and experimental electronic work has all the passion and chaos that was heard and felt through the streets of Lebanon from 2019 until now and takes the listener on an unforgettable ride.

Chlela is now performing at MUTEK on Aug 27, during the PLAY 3, at the SAT, and had a bit of time to talk about “Safala”, the differences between making music in Montreal and Lebanon, and adapting her album to be an A/Visual experience.

PAN M 360: How important is the context of an album for you as a musician? For example, the first time I heard Safala, I didn’t know it was directly inspired by the Lebanon protests and now I do.

Liliane Chlela: I guess context is definitely big, and has a big role in it. I mean, to me and the way I’m presenting it, of course, especially with the live performance, because I have assigned a bunch of friends from a studio in Beirut to create accompanying visual, digital art. But yes, it’s very important. Especially you know, given the story of the tracks and where the album comes from and the names of the tracks and all of that.

Liliane Chlela: In Arabic … actually it has two meanings. The noun with a different autograph can mean “you bastards” or like you’re insulting someone. And safala as a verb can also mean, “you’re failing.” The names of the tracks, individually, all come from an incantation my grandma used to say to us as a prayer to ward off the evil eye.

PAN M 360: Oh so she would say this prayer whenever you were feeling anxious or something?

Liliane Chlela: Yes 100 %. It was that kind of bond where, you know you’re feeling helpless, and there’s absolutely nothing for you to do. So, it was just a little morale booster.

PAN M 360: It’s funny you say warding off the evil eye because many of the tracks on Safala seem very angry and coming from a place of frustration but then there are moments of tranquility. Was this your goal? Blending the evil with the good?

Liliane Chlela: Well when I work on the productions, I don’t have an actual plan and, the concept sort of shapes itself after. Sometimes I look back at a track or passage and realize ‘Oh shit this is where this is coming from.’ Because back then, I had just moved here. So the production part was done in Beirut right before I ran off to here, and you know, things were and still are still going incredibly…

Liliane Chlela: Yeah that’s a good word to describe it. So yes, in retrospect, it basically has, it’s an illustration of, good versus evil, and you in the middle, knowing that sometimes good has to become evil in order to try to figure out a way around all of that turmoil.

PAN M 360: Is playing MUTEK a big deal for you as an electronic producer/DJ?

Liliane Chlela: Playing MUTEK has always been in the back of my head. Especially when you don’t have many opportunities to play big festivals when you’re coming from my region. I’m also an independent artist. So I don’t have an agent. I don’t have a manager, booking agent, and all of that. So it’s always been this great thing to be a part of. but now since moving here, it’s no longer this unattainable festival, and I realize how significant it is that I’m able to play it. And playing this specific album, from a specific context, for this specific context, because we don’t have much representation in a normal MUTEK lineup, I think it’s pretty cool.

Liliane Chlela: Beirut is pretty OK compared to the rest. It’s not like women are banned. It’s pretty open, but of course, you have an imbalance of representation in lineups. Since moving here, I’ve formed a little collective in Beirut, for female gender minorities and members of the LGBTQ2S+ society. It’s for musicians, producers, performers, and newcomers, and people a bit more established. So what we do is advocate for these people to be better represented in club shows and lineups and we have our own shows and parties.

PAN M 360: Do you ever go back to your old work to maybe get inspired or reflect on your trajectory as an artist? I only ask because I know many electronic artists don’t and it’s kind of on to the next project.

Liliane Chlela: I do go back to them occasionally just to see where my head was at during that particular time. And since moving here, I literally have the time and resources to do that. In Beirut, you’re always in troubleshoot mode and don’t really have time for personal reflection.

PAN M 360: Because the scene is so small and constantly have to be on to the next thing?

Liliane Chlela: It’s not so much that, but it’s just that the living conditions are terrible and have been degrading since 2019. So you have like one hour of electricity per day or and you’re like ‘What the fuck’ and you’re relying on generators that every block has installed. So you have to wait for when the power comes back on and then burn through what you have to do. Then you have to worry if you’re gonna die today because there’s going to be an explosion. I mean, I got injured on the first day of the big revolution during a protest, but I mean, OK, we get that over with. But yeah, you’re literally not … The last thing on your mind is worrying about your music and who’s gonna listen to it. Your priorities are elsewhere.

PAN M 360: So it’s the exact opposite of working here.

Liliane Chlela: Exactly. Now you’re worrying about where the next PC club will be (Laughs). I’m in better spirits.

PAN M 360: Has this given you time to work on new material or are you still in presenting Safala live mode?

Liliane Chlela: I’m waiting for the vinyl of “Safala” to be released which should be soon. I have some dates after MUTEK. Like I’m playing Piknic Electronik and some European dates. I have some other new stuff in mind, but I think I have to finish this chapter and move on.

Liliane Chlela plays MUTEK on Aug 27, during the PLAY 3, at the SAT – Tickets HERE