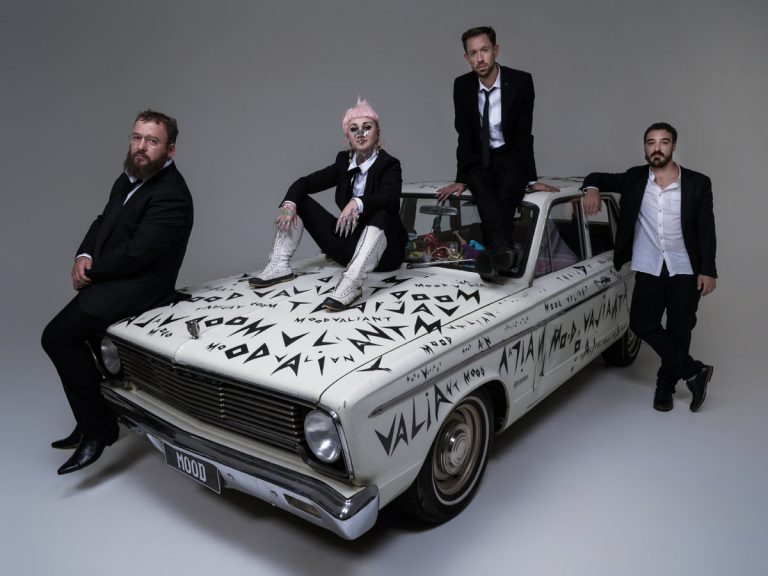 Mood Valiant: The Heights of Resilience with Hiatus Kayote

Fans of nu jazz with a punk attitude, supremely bittersweet, know this excellent Australian quartet. The release of the albums Tawk Tomahawk (2012) and Choose Your Weapon (2015) by Hiatus Kayote were occasions for joy, and then nothing more until the summer of 2021.  Serious health issues experienced by frontwoman and multi-instrumentalist Nai Palm led to this… hiatus.

Fortunately, the Melbourne quartet found Nai Palm healed and in full possession of her means. On this wave of redemption, Hiatus Kayote created the album Mood Valiant, released at the end of June. PAN M 360 reached bassist Paul Bender, who gave us an interview and summed up this long awaited return.

PAN M 360: It’s been a hard ride for Nai Palm after she knew she had breast cancer and finally recovered after a tough fight. It obviously had a direct impact on the band’s progression and also on the inspiration for the new album.

Paul Bender: Of course, it did slow things down, but Nai Palm is very resilient. She had to deal with her health and recovered. She is really a champion with that sort of stuff, she used it as an inspiration and new energy, instead of giving up. She is very strong in a crisis situation. She was very inspiring to see, with that challenge.

PAN M 360: The tension between jazz groove and punk attitude is less prominent on Mood Valiant.

Paul Bender: It is more an emotional record than the previous ones. There is a lot of new music on Mood Valiant. We definitely covered different areas, some are fairly pyrotechnic in their approach and I guess this collection of songs reflect something else, those emotional states we went through. On our previous recordings, we had done those crazy, flashy things, over the top, we proved ourselves in that way. And life is different now, things happened to everybody in the band, so we express something different at this point. Not to say we lost interest in the previous things, but the new songs fit in a different body of work, a particular set of feelings and ideas, it is a sort of cohesive emotional statement, little more focused on this state than a wow factor of explosion, I guess. It is nice to be united around certain things. That being said, there is plenty more ridiculous nonsense, crazy-bullshit stuff to come, whatever Hiatus Kayote do next, we have no doubt. And do not worry, we won’t do boring sad shit (laughs), abrasive, technical  stuff will be back again. Choose Your Weapon was including everything we could do at that time, Mood Valiant is different and built without expressing everything. It’s more like a story and needed to be less hyperactive, aggressive or whatever.

PAN M 360: The orchestration is also different, with reeds, brasses, strings, new electronic sounds. Can you describe the process of arrangements?

Paul Bender: I guess we are always searching for new sounds. You know, the sonic aspect inspires us to drive something. You’ve got a song, it’s got some melody, chords, the way it sounds is very important, so we always try to find different ways to capture it, to colour it and to express what the song is about. It’s always a quest. So this album is more tonally and harmonically sophisticated, but at the same time there is something more live-energy and human-feeling, and some sense of rawness and looseness that conveys certain things and triggers your imagination.

PAN M 360:  Have you played with orchestral sections?

Paul Bender: We haven’t done it yet but it would certainly be fun to extend our line-up for special concerts. We are open to this idea, there will be a time and a place for such an event. Now, we are about to give concerts in Australia and later this year in New Zealand, we can’t think about international touring until the conditions allow us to travel out of the area. Also, we included many elements of what has been recorded with arrangements of Artur Verocai in Rio de Janeiro (“Get Sun” and “Stone or Lavender”)

PAN M 360: In Australia, are there other bands more or less in the same musical niche as yours?

Paul Bender: There are a lot of crazy bands but we don’t take inspiration from any scene. We don’t claim to have invented our style, it’s all stolen in some way. The best you can do to be original is to combine pre-existing things with creativity. Truly original music can also be unbearable and unlistenable.

PAN M 360: Certainly the combination of forms has produced something different in Hiatus Kayote.

Paul Bender: Everyone recombines elements of music that already exist. I guess we combine enough disparate elements of music to be original. But you know, anyone who says they’re really original is a fucking liar. Yeah, a lot of the stuff in our music is pretty distinct, but at the end of the day, 90% of what you do is normal. It’s like cooking, the ingredient you don’t expect is added to a normal meal, it makes it interesting. When I went to study in a jazz school, what did I do? I found something I really liked and I reproduced it! That something then becomes part of you and takes on a different form while you’re playing.

PAN M 360: There is also this mixture of intuition and musicianship, which is very important in Hiatus Kayote. Is that a strength, in your opinion?

Paul Bender: Yes, we’re all students of music forever, we accumulate knowledge and try to emulate aspects of it as it comes into our tool bag, and we work with our musician friends.  We are a mix of educated – me and Simon – and self-taught, Nai and Perrin, musicians, it’s a good combination of theoretical understanding and intuitive understanding. We help each other in both directions, it’s good to keep the focus on both.

PAN M 360: You still have fun together, that’s more than obvious. A stable and happy family?Paul Bender: The family is stable, yes, we are happy with this record, very happy to have gone through this rollercoaster. It’s not easy to reach high standards and the truth is in the expression through a long process of filtration. To get all the members to the same place, there are always battles, but each of us was super patient. At the end of the day, we were all happy to work together.