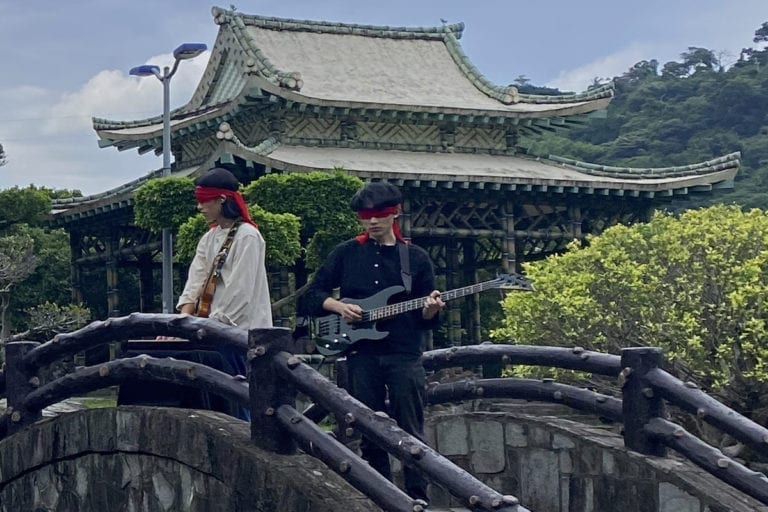 Taiwanese duo Mong Tong indulge a deep fascination for the folkloric phantoms and eerie Chinese esoterica of the island they call home, as well as the international iconography of formalized paranoia. They channel the freaky fragments of fact-or-fancy that they find through psych-funk, synthwave, prog rock, and creepy audio collage, all stewed in a miasmic doom-metal soup. PAN M 360 corresponded with the brothers for some clues to unlock the mysteries of their new album, Mystery.

From its Paleolithic and Gaoshan inhabitants, through successive waves of immigration and colonization, Taiwan has many layers of history, some of it rather dark. The small but vitally located island country is also incredibly complex in terms of its political status – and sacred beliefs.

A visit to the famous Longshan Temple, in the capital city Taipei, reveals something like a shopping-mall food court for divine blessings, to be sought from an assortment of Buddhist, Taoist, and folk deities.

It’s not surprising then that Taiwan has such rich folklore – especially the vengeful ghosts! – and so much room for outré perspectives.

There’s plenty of all that to be savoured on Mong Tong’s Mystery, released on Guruguru Brain, the label for Asian underground music run by Japan’s Kikagaku Moyo. Mong Tong is, more precisely, the brothers Hom Yu and Jiun Chi (who answer here mostly as a pair, due to linguistic challenges, or maybe some frightful fraternal psychic link… who knows?).

“The voice in ‘Chakra’ was sampled from a famous reporter talking about aliens and chakras in Hinduism,” Mong Tong say of the album’s first single. “So basically, this is a song for those who love alien TV shows and conspiracy theories!”

There are further dusty, uncanny wonders lurking in the grooves of Mystery, such as the elements that make up the second single, “Jou-tau”.

“In the beginning, we sampled the voiceover from the Monkey King movie,” Mong Tong explain, referring to the 1999 Taiwanese production Heavenly Legend, one of countless film, TV, and comic-book tales of the superstar simian demigod Sun Wukong. “The song is basically Chi’s organ riffs, plus guitar improvisation, plus Yu’s funky bassline, all put together.”

Then there’s “A Nambra”, which suggests that’s somewhere on one of the many levels of Diyu, or Chinese hell, there’s a decent dancefloor.

“‘A Nambra’ is our disco-funk hit! Funky ’70s basslines are our favourite, so we were making our version of disco-funk. We brought the synth leads into the funky song, to see what would happen.”

“In the K. Court”, meanwhile, subtly suggests a certain ’70s prog-rock reference, the mention of which delights Mong Tong.

“Glad someone finally found the King Crimson reference! In our live shows, we always combine this song with ‘21st Century Schizoid Man’, and surprise the audience – totally worth it.”

Back to the crazy conspiracy-culture stuff, and Mong Tong’s celebration of it specifically as they existed before the Internet, when lurid paperbacks, dubious magazines, and printed propaganda by mail were the primary platform. With all that, it has to be said, came an incredible visual aesthetic, entirely unmatched by the graphic mediocrity of today’s dabblers in the delusional. Taiwan, for its part, had no shortage of such fringe beliefs in their heyday.

“In ’80 and ’90s Taiwan, there were magazines that talked about ghosts, Taoism, and UFOs, and had supernatural photos. After decades, these themes are no longer popular. Most of these books are lost, and can only be found at a few second-hand bookstores. We’ve spent much time searching them out, and chose some of our favourite book covers, then put them on Hom’s Instagram.”

The cover of Mystery is a salute to that scene, and itself a sort of puzzle, a secret coded message to decipher. Pressed to provide any hint or clues, the brothers offer only this cryptic morsel. “There’s a conspiracy theory called Q33 NY, that’s all we can tell!”

Last fall, just a few months prior to the powerhouse Mystery, Mong Tong released an EP and book called Music From Taiwan Mystery – a sort of tourist’s guidebook to Taiwan’s rich reservoir of occult weirdness. There was even an amazing video for it (see above), bursting with black magic rituals and supernatural kung fu. Obviously, Mong Tong’s music is more than well suited to visual interpretation (see below, now, for the video for “717”).

“We’d love to experiment on any kind of artform! Basically, we do everything by ourselves, so we’re able to put Taiwanese elements we love into our music, videos, cover artwork, etc. Now we’re planning to release a second Taiwan Mystery, an EP for plants, and maybe in the future, we’ll make a video game – everything is possible.”

Mong Tong is just one of several arcane activities the brothers are involved in. They’re more than happy to talk about those, as well as the larger Taiwanese underground scene they’re so involved in.

“Dope Purple is a noise and psychedelic rock band,” says Jiun of one of his other projects, “mainly influenced by Acid Mothers Temple and Les Rallizes Dénudés. We’ve released a record on Senko Issha, a label for noise music and free improvisation lovers in Taiwan. Mong Tong has collaborated with labels like Future Proof and Karma Detonation Tapes. Both of them have great artists and release good-quality cassettes.”