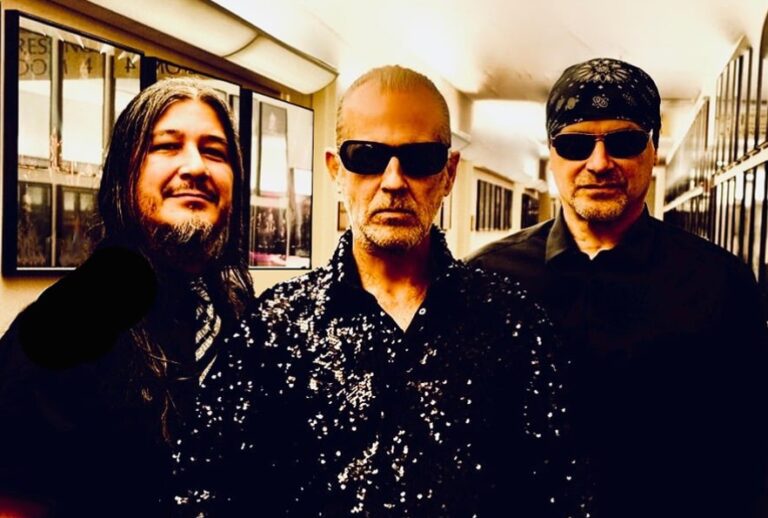 WOULD MEN WITHOUT HATS FIND THEIR SYNTHPOP COOLNESS ?

Here they are again, we see them surfing on a wave of the 80’s, exactly four decades after the release of the album “Rhythm of Youth” and its worldwide megahit “Safety Dance”. And now our Men Without Hats are back on duty after a 10-year hiatus in terms of original material: on the Sonic Envy label, “Again Pt.2 follows Again Pt.1”, a mini-album of covers (Lou Reed, David Bowie, The Tragically Hip, etc.) in the distinct manner of the Doroschuk brothers and their accomplices.

An album with a premonitory title, “Love in the Age of War”, was launched in 2012 by the group headed by brothers with Ukrainian origins on their father’s side and who want to remain discreet about the conflict raging on the other side of the Atlantic. So what’s up? Although his most recent texts from “Again pt. 2” deal with global issues, but also with the meaning of existence and creative life. Frontman and songwriter Ivan Doroschuk prefers to talk about music and this is what PAN M 360 will do at his convenience.

In 2021, the EP Again Pt.1 presented the covers recorded in the style of Men Without Hats. Led by brothers Ivan and Colin Doruschuk, the band has never ceased to exist and continues to enjoy themselves alongside guitarist Sho Murray – since 2016.

Sticking to their recipe of spices and herbs digital/analog technology (this including an authentic Prophet 5), Men Without Hats would find their synthpop coolness. In fact, the process has been underway for the past decade during which the band has been touring extensively, but a new creative breeze is indeed confirming this return to the saddle.

PAN M 360: Hello Ivan, I’ll join you in Victoria, where you have been living for a long time, right?

PAN M 360: The band hadn’t done any original songs for about ten years

IVAN DOROSCHUK: We’ve been touring. I’ve been to more regions and countries with this new incarnation of Men Without Hats than when we were touring mostly in North America. In the last few years we’ve toured Scandinavia, South Africa, Australia, Peru and other places we’ve never been before.

PAN M 360: It was apropos, because synthwave has a big following in Europe.

IVAN DOROSCHUK: Yes, in Scandinavia and especially in Germany. Half of our dates are German when we do a European tour. In France, however, we haven’t been invited to play there yet. We are aware of the French interest in synth pop, we have been trying to perform in France for a while… We hope it will happen soon!

PAN M 360: So for the last ten years, you’ve been able to make a living from touring?

IVAN DOROSCHUK: Well… Nobody does this tour to make a living. It’s mainly for fun. I live from my previous achievements, actually, the royalties from the Hats and other income from our past successes. Now there is no pressure, it’s not about money but about the passion for music. We don’t feel like we’re competing like we used to. Back then, being in a band was a bit like being on a field hockey team. There was a limited number of spots on the charts, radio spots, clubs in the cities and pages in the newspapers. So it was a competition for the young artists that we were.

PAN M 360: Now that you are independent of fortune, it is the passion to make music.

IVAN DOROSCHUK: Yes! We make music for fun in the context of a changing industry. It’s hard to keep up with it all.

PAN M 360: The title of your previous album, Love in the Age of War, was premonitory, especially since you have Ukrainian origins.

IVAN DOROSCHUK: Yes, but there is always war where there have been humans, that’s not new. So we contribute to peace as we can, and this is my contribution.

PAN M 360: As far as lyrics are concerned, the new album is no different from the previous ones: you deal with global, universal subjects. Rather than exploring intimacy, you seem to prefer to question the fate of the world. What do you think ?

IVAN DOROSCHUK: Yes. The themes of the environment, ecology, human rights and freedom are addressed. Today, we are still conveying this same message, these are universal themes that have always been those of Men Without Hats.

PAN M 360: The intimate world is not a territory of exploration, as it has never been.

IVAN DOROSCHUK: No no. I don’t sing about my ex-girlfriends or my private stories.

IVAN DOROSCHUK: Many people tell me that this new album is the spiritual descendant of Pop Goes the World (1987), while Love in the Age of War was more electro-pop and techno like “Rhythm of Youth” was in 1982. “Again Pt. 2” is more orchestrated, more instrumentation is more considerable.

PAN M 360: But isn’t the very identity of Men Without Hats more synthetic?

IVAN DOROSCHUK: Absolutely. We took a slight detour with Sideways (1991), but even today we remain faithful to our electronic roots.

PAN M 360: We have to, because the band has become a synthpop classic.

IVAN DOROSCHUK: Yes, and I think we were lucky, because today I open the radio and I hear so-called current pop and … completely flooded with typical 80s sounds. Today’s production is often comparable to the 80’s, the sampling, the big drums, etc.

IVAN DOROSCHUK: Besides myself, there is my brother Colin, his daughter Sahara (keyboards, vocals), and Sho Murray, guitarist and co-producer. We are joined on stage by drummer Adrian Waite. We are all on the West Coast. Colin and I are on Vancouver Island (Victoria) and Sho and Adrian live in Vancouver. I’ve lived in Victoria on the waterfront for about 20 years as I said, I have a 19 year old son, I was a stay-at-home dad for 10 years, mom was back at university. That made it easy for me because the area is really magical. Like a huge park. I live on the beach, I couldn’t imagine a better playground. My parents had moved there before me, for the nature and the climate. Only my brother Stephan stayed in Montreal.

PAN M 360: What motivated you to make a new album, ten years after the previous one?

IVAN DOROSCHUK: It was mainly our fans that pushed us to do it. We didn’t make so many albums since the beginning. But our fans were writing to us and asking us when the new album would come out. So I started to make new songs three or four years ago. I wanted to make a solo album, voice and piano, with covers of my repertoire, covers of songs that have marked me. When we redid the Tragically Hip song “Blow at High Dough”, I was curious to see how it would sound with the full band. When I recorded the result I thought I should go on as a group, and make a real Men Without Hats album. The covers, including the “Safety Dance” cover (in ballad form), were released last September and the original songs are out now. It was originally a double album and we finally decided to release it in two parts.

IVAN DOROSCHUK: Yes, we had recorded about 20 songs and we have enough material to release another album soon! We are in writing and production mode.

PAN M 360: How do you see the sound progressing in this new context?

IVAN DOROSCHUK: Yes, there is talk of a Canadian tour in the fall. We already have dates in Quebec.

PAN M 360: What about your Ukrainian origins in the actual context?

IVAN DOROSCHUK: My paternal great-grandfather immigrated to Manitoba, my grandfather was three years old. So it’s been a very long time and today we don’t have any known family there. My father went back there about 20 years ago, hoping to find members of his distant family, but without success. My mother is not Ukrainian, her family is from Wales. We did not speak the languages, but my father speaks Russian and Ukrainian. On the other hand, Ukrainian music has been passed on in our family. My father is an amateur musician, he used to play with my grandfather at community parties, at barn dances in Manitoba. My father went on to do his masters and PHD at the University of Illinois after which he became a Professor of Physiology at the University of Montreal. My mother was also a professor at McGill University, teaching classical voice.

PAN M 360: And so you were able to count on a career singer mother to become a singer yourself.

IVAN DOROSCHUK: Yes, but in fact, my brother Colin also has a training in classical singing, he studied at McGill University and also at the University of Victoria. He actually did my voice ten years ago. I hadn’t made music for a while but I could still sing, but I didn’t know if my voice would hold up for 40 or 50 shows. My brother Colin, on the other hand, is really trained in classical singing, he has even created vocal works, he writes operas, he teaches and therefore knows the techniques of singing. He completely deconstructed my voice and taught me the techniques for several months, after which I was singing better than ever before. I now had the tools to get through it. Now I can do five concerts in a row without any problems.

PAN M 360: Even though your family is of distant Ukrainian descent, it must be quite overwhelming to watch this happen, right?

IVAN DOROSCHUK: I prefer not to comment too much. I just hope that there will be a peaceful resolution, I hope that peace will come soon.

PAN M 360: Copy that. So you’ll be back on stage soon and you’ll be defending the material on your new recordings.

IVAN DOROSCHUK: Since it’s the 40th anniversary of the “Rhythm of Youth” album, we are presenting the complete album in the first part, the second part is a best of of Men Without Hats and some new songs on the program. We were surprised by the length of the first album, more or less 30 minutes, only songs for the radio at the time, so it is easily a set.

IVAN DOROSCHUK: A lot of things, the first half of the 70s, a lot of electric jazz from the 70s, progressive rock…

IVAN DOROSCHUK: It does not interest me so much.