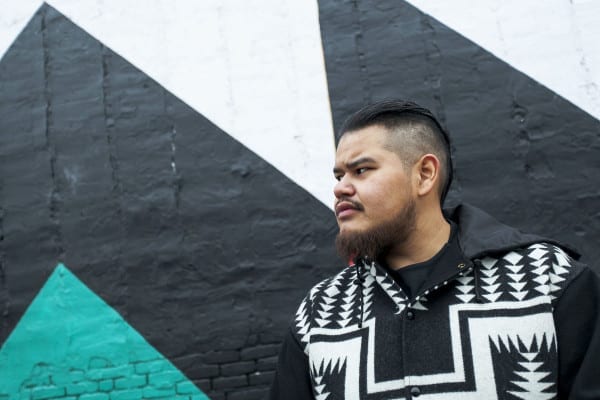 Composer, performer, organizer, singer, rapper, activist… Leonard Sumner carries within him the legacy and hope of the Anishinaabe nation.

In 2019, Winnipeg-based Leonard Sumner won the Juno in the Indigenous Music Album of the Year category. Standing in the Light was a testament to the lucid and fervent commitment of the Manitoba-born Anishinaabe writer, composer, and performer. To this day, this commitment is matched by a composite stylistic approach: Americana (country, folk, etc.) and hip-hop lend a magnetic force to Sumner, who was invited to perform as part of Mundial Montréal. PAN M 360 connected with Sumner to find out more.

PAN M 360: You’re often presented among important new voices on the First Nations roots music scene today. How do you see that, yourself?

Leonard Sumner: I don’t see myself as a new voice anymore, but I feel it’s still important for these stories to be heard.

PAN M 360: Since a few years, there has been a great renaissance of indigenous cultures all over Canada, and it appears to be much more than a trend. How do you see your own contribution to this very important cultural expansion?

LS: If Canada wishes to advertise itself as a multicultural society and nation, it needs to fully recognize the Indigenous peoples and nations that have been existing prior to colonial expansion.

PAN M 360: Did you have role models when you defined your artistic personality and identity?

LS: I was inspired by hip-hop and country music.

PAN M 360: Who are your favourite musicians, songwriters, rappers and beatmakers?

PAN M 360: Folk rock, country, and rap are important components of your art form. How did it come together?

LS: It just happened naturally. Once I taught myself how to play guitar, I started mixing my lyrics into that.

PAN M 360: Could you explain the way you also include elements of traditional Anishinaabe music and singing, and/or other First Nations?

LS: I sing some traditional songs and insert as much of my language into my set as I can. I also include songs I composed in the language.

PAN M 360: For you, what are the specific aspects of your own craft? What makes the difference between you and other songwriters/rappers?

LS: The ability to seamlessly bring multiple genres together on stage.

PAN M 360: Of course the First Nations’ and native cultures’ many issues are a huge part of poetic inspiration of your lyrics. How do you transform those crucial concerns in a poetic way?

PAN M 360: What are the other dimensions of your lyrics?

PAN M 360: What is, for you, the tension between directness and abstraction? I mean between reality-based concerns – sharing stuff that’s real – and more abstract themes?

LS: Fiction can be shaped however a writer wishes it to be. Fact is a representation of the truth, and it’s important to speak the truth when speaking of serious issues.

PAN M 360: You seem also to have performed all over in the First Nations cultural networks?

PAN M 360: How are your songs perceived in this great indigenous diversity in North America?

LS: They are received well. We all have not had the exact same experience, but people have empathy because there are commonalities.

PAN M 360: What are your hopes for an international career?

LS: I’ve toured Australia and played a bit in the U.S. I would like to do a European tour eventually.