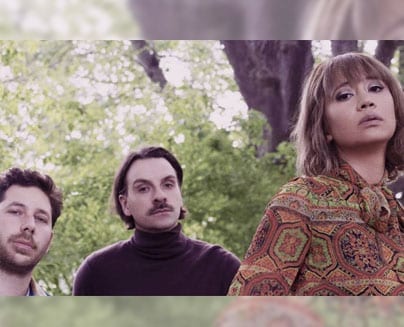 Le Couleur: When everything fits

Le Couleur emancipate themselves and discover the pleasures of group love with Concorde, a record that the band defends on stage as part of the 20th Coup de coeur francophone.

With this third full-length album, the second since the Montreal trio found itself on the Montreal label Lisbon Lux, Le Couleur have decided to “open up the couple”, as its members like to say. After some twelve years as a ménage à trois, the synth-pop band wanted to change its formula by inviting several musician friends to participate in the album. The result was beyond their expectations, breathing new energy into the band. The fruit of its musical frolics in the studio, Concorde flirts with myth, loss, and death in a sexy, bewitching, and very aesthetic sound universe. There’s a bit of Michel Colombier in there, some David Holmes, Sparks, Air, and Stereolab, among others. PAN M 360 spoke with the trio – drummer and tinkerer Steeven Chouinard, his partner and singer Laurence Giroux-Do, and bassist Patrick Gosselin – on the eve of its webcast performance at the CCF.

PAN M 360: Tell us about the concept of Concorde, because there seems to be one!

Steeven Chouinard: Concorde was the first song we made for this record. Our music always comes before the lyrics. So Pat and I recorded the piece and then Laurence wanted to write something related to the Concorde. She was fascinated at the time by that plane and the tragedy that ended its history.

Laurence Giroux-Do: We felt that the whole aesthetic of Le Concorde was in line with the image we wanted to give to the record, that slightly vintage but at the same time quite futuristic side, the beauty of the object, the myth, the dream, the sensuality…

SC: It was still a sexy plane! It wasn’t ordinary, travelling at almost twice the speed of sound on top of that. So, from there, we started to compose other songs. The second one we did was “L’Aube du 3e soleil”, and given the mood of the song and what we heard in it, what it inspired us, that’s when the words came. It’s quite cinematographic, our stuff. In fact, for this record, we were also influenced by images, more than by other bands; a lot of porn films from the ’70s like Emmanuelle and Bilitis, the sensuality of Francis Lai’s music for example, Gainsbourg… All this slowness, this sensuality, this little lo-fi side that is also present in these films. So we realised that it was tragic, that it talked a lot about death and absence… That’s a bit like the concept of the record, without it being too explicit or too personal.

LGD: Take “Silenzio”, for example. This piece refers to the death of a mafia man who was shot, who didn’t respect the omerta. “Oiseau sauvage” is about a schizophrenic… So the record revolves around death, myth, and absence, those are the three main themes of the album. There is something fascinating about how we see death and how we see ourselves dying, I think.

SC: We’re all afraid of it, but we’ve realised, having a four-year-old daughter with whom we watch cartoons, that there are several ways of seeing death. In the animated film Coco, they talk about the Day of the Dead in Mexico, which is a very festive and colourful event. It gives another perspective on our perception of death in our society.

PAN M 360: You’ve chosen a good year to release a record with this kind of theme. Was releasing the album on September 11 also part of the theme?

LGD: We were supposed to release the album on April 18, but for reasons you know, we preferred to postpone the date. So we thought, why not September 11? The crash of the Concorde on September 11, in the middle of the pandemic at the end of the world…

SC: And we thought it was certain that the journalists would ask us about it when we did interviews. So there you go! (laughs)

PAN M 360: How does this record differ from the previous ones?

LGD: In the way it was recorded, I would say.

SC: The ideology was different for this record. It’s the first time we decided to open it up, if I may put it that way. We invited quite a few musicians. Because basically, it’s Laurence, Pat, and I who make all our records. It’s happened too often that it’s one person from the band who records a whole song, so we wanted something more collaborative. We called on people we know, friends. We wanted them to add their touch: a percussionist, a keyboardist, and several guitarists came by. We finally decided to do it live. I’d say that two thirds of the record is live. We were seven musicians at the same time. We’d never tried this kind of experience before and we really tripped. This sharing of ideas, this common passion… Just being in a gang, drinking beers together, submitting ideas… For me, it’s all very positive. It’s sharing, it’s love, it’s art. So that’s what makes it different from other records where I often found myself alone behind the computer or a synth to program everything. Pat would come and do a little thing, Laurence would put her voice down and that was it.

LGD: I didn’t think we could function this way. We had done our rounds, but with this record, it seems that it rekindled the flame, it gave us the desire to continue the adventure in a different way, a new way of emancipation.

SC: It was positive! It was fun to have the opinion of the other musicians. Even if I’m very directorial in the way I perform, I let them go and I liked their faults. That’s also why we hired them: the defects, the tics of people, all that can be heard on the record. There are things I’ve been doing for ten years, and we’ve heard enough of them, that the keyboardist we hired doesn’t do. He has his own way of playing and he’s a thousand times better than me, on top of that. It’s the sum of all these things that makes us still on our honeymoon with this record, one year after having finished it. It’s been two months since it was released and this honeymoon has continued because we’ve also managed to play it on stage.

PAN M 360: And who are these guest musicians?

Le Couleur: There’s Sheenah Ko, from Besnard Lakes on the organ, the gang from Paupières who co-wrote songs and did backing vocals, Louis-Joseph Cliche from Beat Market, Valence, Jean-Nicolas Doss from Wizaard, and Paul Hammer, who’s the son of Jan Hammer, the composer of the music of Miami Vice and an ex-member of the Mahavishnu Orchestra.

PAN M 360: You’re going to do another concert, this time as part of Coup de coeur francophone. How is that going to work, what are you going to present?

SC: It’ll be what we presented at the launch, as well as at the Festif and the FME. We’re among the lucky few who managed to do these little festivals towards the end of the summer.

LGD: We play mostly Concorde songs, but we’ve still kept some classics. We’re there now. We’re going to dig into our best-of and do them a little differently.

SC: The show is stronger. We are six musicians on stage. We toured with three at the very beginning, then with four for the last five years, but now, with six, it’s different. These are beautiful people who play, who get high, it’s really cool. And the comments we’ve received are very good. There’s energy flowing everywhere. There’s a segment that looks a bit like what we’ve done in the last five years, notably a 15-20 minute non-stop electro/DJ set, that we didn’t want to leave out. But otherwise, it’s more paused, there’s more staging, there are ballads, there are interruptions between songs, because before, it was 1-2-3-4 and we only stopped at the end of the show. There were no real breaks between songs. So now we adopt a more classical formula, mixed with what we used to do before.

LGD: Of course! A tour in Brazil, another one in Mexico… ah no! it’s true, everything has been cancelled! (laughs)

SC: We had great plans for Latin America, Mexico, and the United States, and of course everything fell through. So, for the coming year, we will try to work on something else.

LGD: In 2021, it could be very difficult to play abroad. We’re going to try to turn to Quebec, which we’ve perhaps neglected a little too much. You know, we’ve played many times in Paris or Berlin, but we’ve never gone to play in Chicoutimi or Terrebonne. So, no doubt like all the other Quebec artists, we’re going to try to develop that. We also had the idea of releasing a small EP.

SC: We want to do the complete opposite of what we did for Concorde, all this sharing between musicians, and focus more on the three of us, something very spontaneous and minimalist, bordering on piano and voice, nothing fancy or too thoughtful.