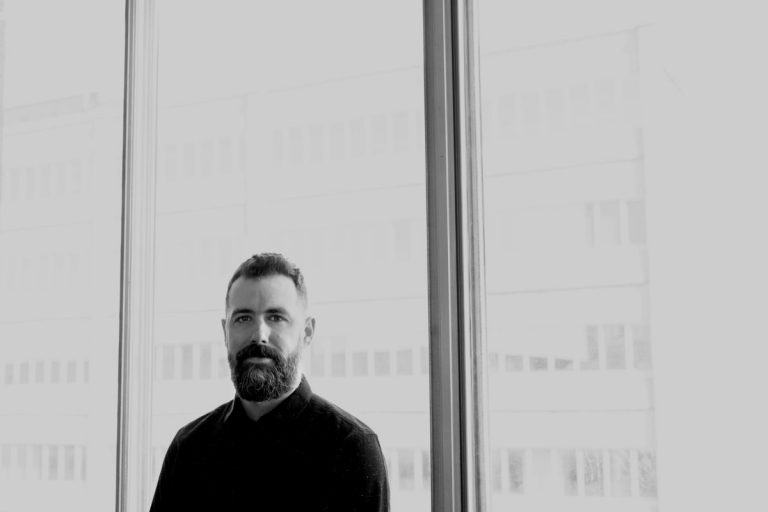 Trained as a saxophonist and composer, Montrealer Jason Sharp has followed the curve of contemporary expression to arrive at a focal point where the rays the Western classical tradition, modern and contemporary jazz, and soaring electronics converge. All of this baggage is brought together in his recently released solo project The Turning Centre Of A Still World, his third album on the Constellation label.

Specializing in bass and baritone saxophones, Sharp invites us on a new episode of his creative life, a journey spread out in eight stations. At the confluence of the genres that have forged his compositional identity, Jason Sharp brings together the aesthetics of today and offers this inspired project.

Sharp deserves to be known by music lovers, which is precisely why PAN M 360 shares this first conversation with the musician.

PAN M 360: We’ve heard you playing in different contexts, not only “serious” music but also creative pop like Elisapie’s songs. So we want to know more about you, beyond this new album. Where are you from and what led you to Montreal ?

Jason Sharp: I was born in Edmonton, but I moved around. After my first music studies in Alberta, I went to school in Toronto, then I continued in Amsterdam in jazz composition. I have been based in Montreal since 13 years.

PAN M 360: You have a jazz background, but also an electronic background mixed with contemporary. So you switched progressively from jazz to live electronics, didn’t you?

Jason Sharp: Very much so. It all adds up to my background, that’s for sure. Hopefully my recent record explores all those experiences. From the very beginning, I started to study the classical saxophone. After high school, I started improvisation in the jazz context, and then years later I went to the University of Toronto to study jazz performance. Through that cycle I started composing, drawing a little more to my classical and contemporary music background in orchestration, and then into more a compositional focus, where the improvisation is also used with the instruments that I play. It led me towards live electronics in Amsterdam, and after coming out of that school experience, I left my own devices to discover my own sound, and I feel it’s just been a progression utilizing those different backgrounds of the music I’ve been making. So when I write for ensembles and film scores, I use all of them.

PAN M 360:  How is the saxophone embedded in your compositional approach?

Jason Sharp: I play mainly baritone and bass saxophones. I started off  with the alto sax, then I played in a saxophone quartet and I was lucky to play my own baritone sax at the University of Alberta in Edmonton. I found a voice playing baritone, and I was also playing tenor and baritone at University of Toronto. And then I ended up with the bass sax, which qualities are close to the baritone sax.

PAN M 360: The focus in your new music is not complex melodic patterns,  but more textural and harmonic. What justifies that aesthetic?

Jason Sharp: Leaving the jazz lineage, I have been less interested in crafting melodic lines over harmonic progressions, and more interested in textures, timbres, evocative moods created out of the horns in more diverse orchestrations. I believe the baritone and bass saxophones are uniquely adapted for that, it can function in a bass role, also harmonically relevant in overtones. Its textures and timbres are rich, those horns fit very well in that language.

PAN M 360: What is your electronic gear?

Jason Sharp: Baritone and bass saxes are used 50/50. There are several microphones for the saxophones, I’m also playing bass pedal, and Moog Synthesizer for bass and the harmonic foundation. For most of the orchestration above and beyond, I built a modular synth around that setup, and then a harp monitor to provide a link for the synthesizer, So all the rhythmic elements are being clocked while I play. I’ve built a modular synth setup around that concept. Then I’ve got another sensor for my breath, to control the white noise and more textural elements of the synthesizer. All the orchestrations are handled between me playing the bass pedal while I’m playing sax or modular synth responding to my breath or harp monitor.

PAN M 360: Is there a danger of being compared to your colleague Colin Stetson, because he also plays baritone and bass saxes and uses electronic devices?

Jason Sharp: (laughs) Beyond Colin Stetson comparisons, it’s good being introduced to more diverse sounds on the saxophone in particular. If my music ends up being a gateway to discover people like Evan Parker, John Butcher, Ned Rothenberg, Anthony Braxton and others that could use the saxophones with extended techniques, that’s great. It’s always interesting for people to find gateways and discover new music, also in the electronic field. What is unique about my new record is that the saxophone is at the forefront. It’s considered to be an instrument within an orchestration and it’s not in that specific case. So if I can help people discover other saxophone players with contemporary ideas, that’s also great, and all part of the evolution of the instrument.

PAN M 360: Are you also involved in projects that could implicate a different approach than the one leading your solo projects?

Jason Sharp: Yes, for a concert performed live in Winnipeg this September, I wrote some music for two drummers, pedal steel guitar, two vocalists and saxophone. This project is called FYEAR. The writing is more harmonically and melodically driven, it’s written for an orchestration that’s not so electronic, a little more rooted in the jazz idiom.

PAN M 360: Are you going to perform your new solo album project soon?

Jason Sharp: Yeah! There are also films for each track done by Guillaume Vallée. The whole album in a visual form is also released by Constellation. There will be a short movie accompanying each piece.  So the next step is a live concert  at Phi Center, I will be solo while the filmmaker will be projecting the images. I will provide the same triggers to the film maker. It’s gonna be a live audiovisual performance of the film, that brings the audience to the heart of the project. Then you will be able to witness the physicality of the performance and this ability to improvise with myself.

Jason Sharp performs his solo project, with the images of Guillaume Vallée, at Phi Centre, November 20.