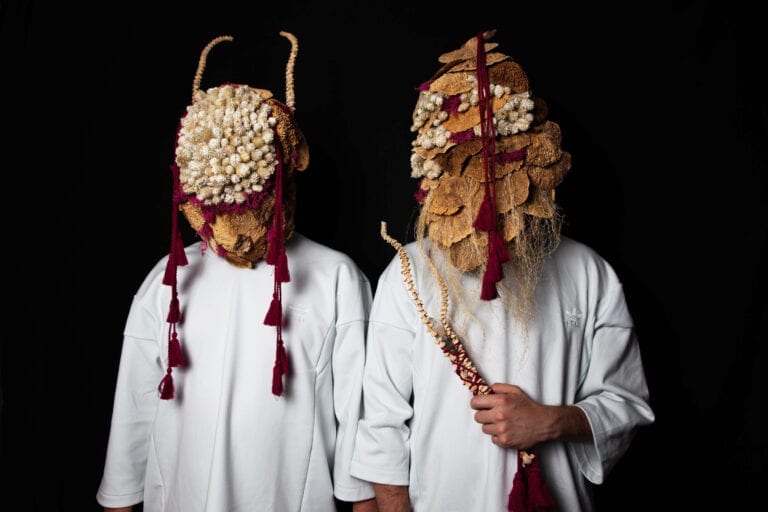 Ancient lands, lost in the raging waves of history and myth, are the latest object of fascination for Lima, Peru’s Dengue Dengue Dengue, masked mystics of trippy tropical bass. Initially, a decade ago, disciples of dub-heavy digital cumbia, the duo of Rafael Pereira and Felipe Salmon soon enough spread their creative tendrils in wider, weirder ways – often ensnaring amazing visual artists in their sinister schemes. They’ve adopted the alter ego DNGDNGDNG for their new On the Corner release, the Continentes Perdidos EP, which takes them to the most far-flung, uncharted territory yet.

PAN M 360: The theme of your new EP is mythical lost continents, and you’re releasing it under a different, or perhaps subsidiary, name, DNGDNGDNG. Musically, the tracks are simpler, more skeletal, than your Dengue work. You’ve been reaching beyond nuevo-latino sounds for a while now, but in this case, it feels like you’ve created an update, with modern technology, of “roots music” from places that never even really existed… or did they?

Dengue Dengue Dengue: Yes, this was exactly the approach. Trying to imagine music that came from a lost place, made with ancient technology. We’re always trying to create and fuse rhythms, this time we really tried to push it further, while also keeping a minimalistic style of composition.

PAN M 360: Each of the lost lands that you refer to deserves a little mention, to educate our readers. We’ll start with “Lemuria”, which is supposedly in the Indian Ocean. This lost land is very important to followers of Madame Blavatsky’s Theosophy… one of those weird, artisanal American religions which is kind of a soup of everything, and makes no sense.

DDD: We read a bit of her work but at one point, as you said, it makes no sense. But the names really have nothing to do with it, these names and concepts were proposed by earlier archeologists, historians, and philosophers. Originally, it seems that Lemuria was hypothesized as a land bridge, now sunken, which would explain certain discontinuities in the distribution of species and ecosystems. It was later adopted by occultists and new-age philosophy.

PAN M 360: “Hiperborea” comes from Greek legends of a land far to the north, a cold land of giants and eternal sun. One would think they meant Sweden, but actually, they were talking about Transylvania – in Romania, today – which doesn’t have any damn giants, just lots of vampires.

DDD: Actually, I didn’t see any vampires in Romania, but maybe that’s because Peruvians eat a lot of garlic? Each author who described Hyperborea located it in a different place; some thought it was in between the Transylvanian alps, others in the Artic ocean, and others in the Ural mountains.

PAN M 360: To be serious for a moment, “Atlantida” and “Mu” both refer to places connected to the racist ideas of so many Europeans, that the indigenous peoples of the Americas must have had help from aliens or “the ancient ones” to accomplish the incredible things that they did, pyramids etc. Thoughts on this?

DDD: Just to be clear, we don’t follow these fringe theories blindly, these are concepts that we like to investigate with an open mind, but they are not more than theories. Atlantis was described by Plato originally, in Timaeus and Critias. Maybe these lost continents are an idea connected to ancient, antediluvian civilizations, or more precisely, a global, pre-Younger Dryas, technologically advanced human civilization. A way to represent the pre-cataclysm era. After the disappearance of these lost lands and the massive damage to the rest, humans founded different civilizations that rose from the survivors of that cataclysm. The buildings and monuments they found in ruins got repurposed for their own religious practices. Maybe that explains some of the advanced engineering techniques that were used in the making of some artifacts and monuments in ancient times. We are not saying that everything was built by other people, but rather the same people – back in time.

PAN M 360: Your releases and merchandise have featured illustrations by Davide ‘Dartworks’ Mancini, whose drawings seem like a cross between legendary metal artist Pushead and psychedelic “visionary” art – beauty and horror at the same time! Can you tell us a bit about working with him?

DDD: Actually, the album Zenit & Nadir, released last year, is the only project on which we had the pleasure of working with Davide. We were on tour in 2018, and in Davide’s hometown in Italy, we played at a very nice festival where he was also participating, showcasing his artwork. We immediately approached him and bought a few of his drawings and asked for his email contact. A few weeks later, we contacted him and started working on a concept for the album. We love his stuff and we are definitely gonna keep working with him on future projects.

Another amazing artist, who designed our first two albums and a few EPs, is Peruvian artist Tania Brun – you should definitely go check our her work.

PAN M 360: Just before Continentes Perdidos, you put out the three Humos EPs, as a kind of retrospective of your first 10 years. I imagine that digging into your archives for this, especially the early material, was like opening a box of old love letters – or maybe visiting old crime scenes. What was that process like?

DDD: To be honest, it was a very quick and logical process for us. We still play all these tracks in our sets, maybe some more than others, but they are definitely always in our digital record bag. All these tracks, for some reason or other, didn’t fit into the albums or EPs we were working at the moment, so we never found a proper home for them, but they were still really meaningful for us – they define certain periods of the project and, were really easy to identify.