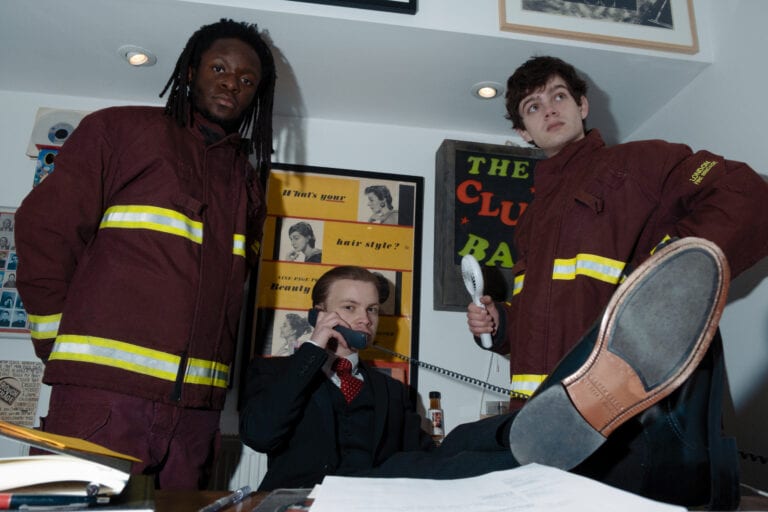 Cavalcade, the highly anticipated, newly released second album from  black midi, takes the now British trio back to the paths of unbridled progressive alt-rock music. Like the previous Schlagenheim of 2019, which revealed to the world a group of young virtuoso musicians, capable of incredible technical prowess, digging without restraint into punk, jazz, experimental music and progressive rock like children with a box of candy, Cavalcade, aptly titled, is a surprising, ambitious at times, difficult record, on which all kinds of influences and ambiances jostle together. The delirious first single “John L”, released last March, and the equally crazy video that accompanied it, furiously set the tone for what was to come: Cavalcade is an unbridled ride from which one does not emerge unscathed.

It’s at 2 p.m. that we had an appointment with Geordie Greep at his place in London. Comfortably seated in an armchair in the basement of his house, wearing a shirt, tie and a baggy jacket (a bit like the photo in this article), the guitarist and lead singer of black midi looks like he’s about to be interviewed for a job selling used cars. Unpredictable and sometimes irascible, the talented musician is in a pretty good mood. Without going into too many details and anecdotes, he talked to PAN M 360 about Cavalcade, the new opus of the London combo featuring bassist Cameron Picton and the prodigious drummer-percussionist Morgan Simpson, completed by saxophonist Kaidi Akinnibi and keyboardist Seth Evans.

PAN M 360: How would you describe Calvacade in your own words?

Geordie Greep: Non-stop thrills, adventure, action, drama, comeday, romance… it’s got it all! The highest highs and the lowest lows.

PAN M 360: The word “drama” pops up often in your interviews and even your press releases…

Geordie Greep: It’s a less limiting term than say… noise-rock or R&B or something like that. When you have a more vague and emotional term like “drama”, it doesn’t mean you have to do a specific type of music, it just means that you can use it as a guide to make music that has a form of trajectory or tension to it. And I think drama is a good thing to keep in my mind because you always want the music to be exciting, to have the serene or melodic moments still have that threat there, the tension, the drama, and to still be able to go back to a quiet moment…

PAN M 360: The cover seems to represent quite well the contents of the record, it’s a dense and intense cover but with a lot of blue, blue being a more meditative colour, not too aggressive. You chose to work again with David Rudnick, who did the cover art of your first album. Would he be your main artist for the covers, someone who creates a style that will fit the band like Vaughan Oliver did with 4AD, Peter Saville with Factory, or Malcolm Garrett with the Buzzcocks?

Geordie Greep: Well, we like what he did on the first album, even though he had a very limited amount of time to finish that cover, he did it in about a week. So now we had more time and we thought that if he could do what he did in a week for the first album, let’s see what he can do for this one in a couple of months!  He has a similar approach to his art to the one we have for our music. You get someone that you like and get him to do something that he really believes in, and not try to water him down but instead let him follow what he thinks is the right thing to do.

PAN M 360: How do you build the songs? Is it lyrics first, or do you work on the music before you add the vocals?

Geordie Greep: It’s two separate things for us. We work on the songs together or someone does that alone at home and brings it in, and then we decide who’s gonna do vocals. And whoever is going to do vocals looks for every word they can think of that fits best to the song.  So it may not be the best method because there isn’t necessarly an intelligent design in how the lyrics and the song fit together a lot of the time, it’s more like a coincidence, like what words fits more with the song rather than constructing each side by side. But there are a couple of songs on this album where the words and the music were kind of done at the same time, built around each other, but most of the time they’re done completely separately and just put together afterwards.

PAN M 360: It seems the music stems less from jams than the previous album.

Geordie Greep: On the first album the way we would actually make the songs in the first place was to just jam out untile we had a verse or until we had a kind of chorus. On this new album, it’s more one guy sitting down and thinking, “okay, let’s make a verse and make the verse fit with the chorus,” that kind of thing…

PAN M 360: What are the main differences between Shlagenheim and Calvacade?

Geordie Greep: I hope that the main difference is, there ius much more nuance to it and more dynamics, I hope there are more colours involved. It’s just a more interesting album, I think. The songs are more melodic and have more longevity, meaning that you can listen to them longer without getting bored.

PAN M 360: What did you try on this album that you haven’t tried before?

Geordie Greep: I don’t know… It was a fairly similar method of recording and everything. Aside from the songs written completely differently, we used a click track on a couple of songs, which is something the we never did because there were bits in those songs that had to be recorded separately, and there were also songs that didn’t rely so much on the push-and-pull tempo, like a lot of our other songs.

PAN M 360: You used different instruments too, for the new album, no?

Geordie Greep: Oh, yeah (laughs). I think it’s on “Diamond Stuff”, and I think what Morgan (Simpson) was doing there was just using a bow on the side of this bowl or frying pan to make a kind of a ghostly sound like you do with the cymbals, so it’s more that kind of thing than hiting on the thing.

PAN M 360: Tell us a bit about the recording. I understand you guys went to a studio in Ireland just to record a kind of a demo, but ended recording most of the album there.

Geordie Greep: We went there to record a few tracks, just to see how it is to work with John Murphy, the producer of the album. But the atmosphere was really good and the songs sounded really good too, so we ended up recording all the tracks on the album to a kind of half-finished degree. We did it all in between lockdowns. You know, we had this free time so it would have been a tragedy to not take advantage of it. If we would have stayed home and did nothing, that would have been such a waste of time.

PAN M 360: Did Matt Kwasniewski-Kelvin help on the album before he took a break from the band?

Geordie Greep: (hesitant)… It kind of happened before we recorded it and even writing the tunes. He did work on two songs that we wrote a few years ago and put on the album, but for the rest he did not take part in any of it.

PAN M 360: How did you cope or adjust to his departure?

Geordie Greep: The whole situation with Matt has been developing for a long time, so there wasn’t really a sudden change. But it was quite cool on some of the tracks to lean into kind of the trio aspect, a kind of a more spacious element, on tracks like “Dethroned”, it’s like kind of a power-trio sort of thing, like Jimi Hendrix’s Experience or The Police, it’s great to have fun with that sort of space sometimes. It probably did change the writing process as well, because there is one less cook in the kitchen, you know?

PAN M 360: Your label has this Golden Ticket contest, where a ticket will be inserted into a Cavalcade album in the U.S. and another one in the U.K., and will give the winners the chance to either have black midi as a band for an event of their choice, or a day in the studio with the band for a creative collaboration, or tickets for two to all future black midi worldwide shows for 10 years, but there is also a pretty special flexi-disc that comes with some of your albums – what is it about exactly?

Geordie Greep: We did a poll asking different independent record shops from around the world to do a list of ten songs that they like, and get their customers to vote for the one they prefer so we could cover it. Then that song will be on a flexi-disc that will come with our album, but only available at the store that voted for the song we covered. So there are as many songs as there are different record shops, meaning it’s not going to be the same songs on every flexi, depending of the store where you buy the record. It was really fun doing it because there was quite a range of songs. We did songs like “Nothing Compares 2 U” from Prince, “21st Century Schizoid Man” from King Crimson, “Psycho Killer” from Talking Heads, “Love Story” from Taylor Swift, a Captain Beefheart song… quite a funny mix.