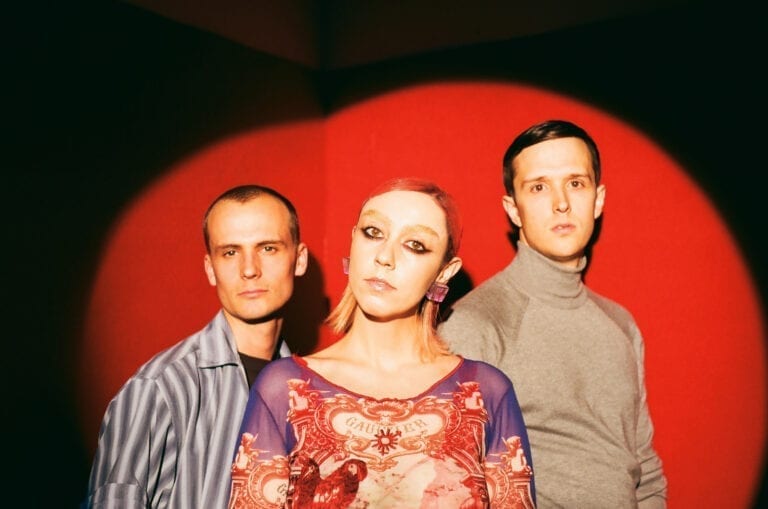 There comes a time when an art-rock- or avant-pop-orientated band emphasizes conciseness of purpose, the immediate impact of a melody, efficient harmonic constructions, in short, the fundamental qualities of a song beyond its stylistic orientations and the atypical environment in which it flourishes. This is what the fourth studio album of Montreal trio Braids, originally from Calgary, is all about. Shadow Offering has just been released on Secret City Records, and Taylor Smith and Raphaelle Standell-Preston commented on the creative process.

PAN M 360: What were the main steps forward on this new album?

Raphaelle Standell-Preston: We definitely wanted to attempt to capture the live energy that we have on stage.  A lot of our previous records were built bit by bit, like narrowing in on things, almost squeezing the life out of things to get it to be perfect. This time, a lot of the captures were done with all the instruments, drums, vocals, bass, or synths at the same time, so we could get that palpable, visceral energy that is so pronounced in our live performances. And yeah we accomplished that.

PAN M 360: Things took a major turn when you brought in Chris Walla [guitarist, producer and former member of Death Cab for Cutie] to produce the record.

RSP: Chris became a dear friend of ours and was involved in our last record. When we started working with him, we thought the songs were done. And… he said we needed to throw a lot more stuff on them and develop them. He said our songs were very live, but not done. He really pushed us to see how lush and wide the songs could be, while still capturing the live energy.

PAN M 360: Isn’t the quest for more succinct works a sign of maturity?

RSP: Yes absolutely. We’re adults ! Fully formed! Yup, we both just turned 30 in the wintertime. I personally had a thirties midlife crisis meltdown. But we’re easing into it! Getting more precise. It’s something we strove for, to have more potency in our songwriting. I think previously, we felt we’d been a bit long-winded with things. With these songs, we wanted to create a nice, compact package of balanced emotion and balanced energy, and really tried to flex and challenge ourselves as songwriters. I think that’s part of why the record took so long.

PAN M 360: How has this change of course taken place over time?

Taylor Smith: There was an intense need for our music to be unlike something we’d heard before, with a strong emphasis on creating sort of an otherworldly feel. We were mostly using guitars back then, the idea was that if you could no longer recognize it as a guitar then it was a success! We were trying to wrangle songs out of experimental texture or sonic exploration. With this record, we wanted to write really good songs that existed no matter whether you dressed them up on a myriad of different instruments – piano, guitars, synths, drum machines, etc. Instead of songs being placed on top of experimentation, experimentation being placed as decoration on top of songs. Or, if someone wanted to cover it, that could actually be possible, because there is a song in there. Our relationship with that is always in flux as we grow as musicians, even now I see us having finished this record and learning back into more experimental pastures, but time will tell where this leads us to.

PAN M 360: As for the lyrics, is there a thematic direction?

RSP: There was a very conscious effort to have songs conclude hopefully, and for there to be hope in the lyrics. I’ve always been comfortable exploring human struggle and my own struggles, but with this record I wanted to put the listener hanging over the cliff, and wanted them to be put on solid ground, and in turn, put myself on solid ground. Writing the lyrics was very healing for me, very therapeutic, I wanted to have feelings for other people, being very vulnerable and very honest. I wanted to find healing and hopefulness through these songs. One of the inspirations for me was the poet Mary Oliver. I really got into her observations on relating human nature to real nature. So evocative for me.

Yeah, there’s actually moments on the record said from my perspective, but there are observations on friends’ relationships going through turmoil. Even though I’m talking about my own experience, it felt really important to me to widen my interpretation and presentation. I wanted to be very thoughtful with how I conveyed certain feelings or issues, such that the audience could truly relate to the lyrics, and see themselves in them.

PAN M 360: To make such a shift towards songwriting concision possible, what exploration have you conducted?
TS: The records that we reach for and listen to went through a phase in which we were reaching for really classic music – Joni Mitchell, CSNY, etc. – and seeing what our world looks like through that lens. But it doesn’t matter, at the end of the day. All the matters is how the music makes you feel. Sound is sound, whether you’re making it with traditional instruments or not.

RSP: Specifically for me as a vocalist, I was very drawn to big, beautiful voices, big singing, Freddie Mercury, Whitney Houston, Adele, Alanis Morrisette, big, belting vocals. I was also obsessively listening to the record Blond from Frank Ocean. I really wanted to learn to do this, and it felt so fine, physically, to do this.

PAN M 360: Was the album completed during the pandemic?

RSP: The album’s been done since October 31, 2018, so it’s been a while. Since then, we made a lot of music videos, and put a lot of work into the visual presentation of the album, and have been working very, very hard on a live set – and then COVID  happened and everything got cancelled. Which has been a difficult blow, but we’re making the most of it, trying to continue experimenting and growing as artists. That’s exactly what we’re starting to do right now, working on new material, experimenting. I think we have five or six songs we’re working on right now. Blue Hawaii, my other band? I’m finishing a Blue Hawaii record right now. I was finishing the latest mixes last night, having so much fun, it’s going to be a really uplifting record.

PAN M 360: Do you feel that the long process has brought you to a successful conclusion?

TS: I think this record marks a big change for us as people in growing up, so to speak, and part of that represents a culmination of influences across our entire musical career. For me, it’s a notable summit of inspiration and development since we first started. This record was just as inspired by Animal Collective as the first one, even if you can’t hear it, it’s part of it. This is record number four for us, there are so many layers of inspiration over the years that culminate in the moment, after making 10 years of music.

This record very much feels like home – where all the skills and development and inspiration across our career have been pointing to. It’s not us trying to step out and do something entirely brand new, it’s rather a narrowing in, a focusing in, a chiseling of the group’s identity. Braids is an intimately personal project, and it’s very honest – what we are putting out as our music is a very close reflection as who we are as people, and it’s very close to our own identities, we place a lot of personal sense of self into the music. That’s been the case since we first started; it’s been a consistent through-line throughout the entire project.