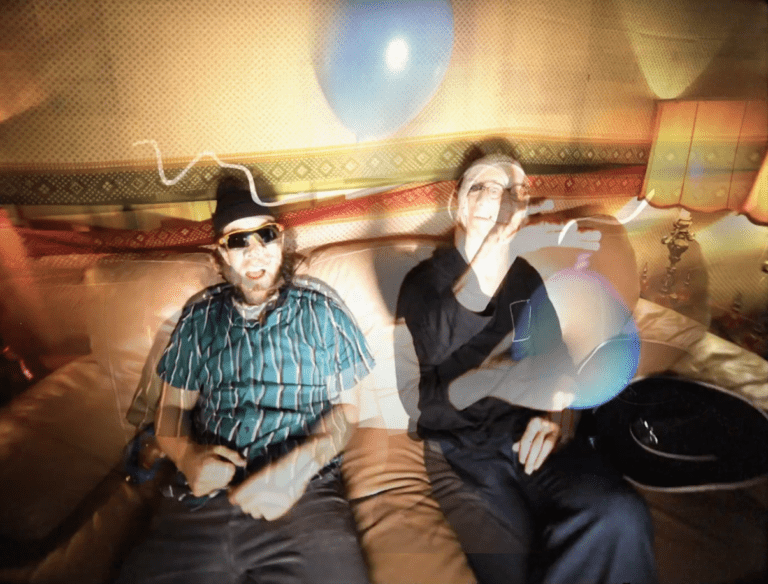 The following conversation is the result of a conference call with Jean Massicotte in Montreal and Arthur Comeau in Dakar. Comeau currently resides in Meteghan, Nova Scotia, and was in Senegal for family reasons.

PAN M 360: Let’s start with the genesis of Doubleheader.

Jean Massicotte: Arthur had an appointment with artistic director and producer Denis Wolff in our shared space, so that’s how we met. I’d loved Radio Radio for a long time, and what Arthur had done with Pierre Kwenders. Denis introduced us, shortly afterwards we jammed on a track he had started, Samito was present at this session. We had managed to do something really viby. I liked doing something more beat-based because I don’t do that often as a producer. A little bit later, Arthur played me a Louisiana beat and I flew out to jam at his house in Clare, Nova Scotia. Over a few days, we recorded about 15 instrumental tracks.

Arthur Comeau: We record, we treat the music and the voice as samples, that is to say we take the best takes and we rework them, a bit like a DJ. There’s something chaotic in there, trial and error, let’s try this, let’s try that, let’s do the voice takes two or three times before we find what fits.

JM: The artists come to the studio, we make them listen to instrumental tracks, they choose one. While the piece plays in a loop, we discuss, ideas come out, the artists propose sounds stored in their phones. We try things out, then they go to the microphone and they sing. And then we take their voice tracks and make a song with them. We often put ourselves in danger a lot of the time. We want accidents to happen. It creates sparks and it’s a lot of fun because we force ourselves to do things that we wouldn’t normally do. If we’re hired to make an album, there are a lot of interesting things that won’t click with the client. Here, we bring out the overflow. »

PAN M 360: How is Doubleheader a two-headed animal?

AC: Yes, its two heads of production. I wanted to work with Jean, I wanted him to producer my music when those around me see me as their producer. The world comes to me and I go to Jean, we form a doubleheader. Two gravitational forces pulling at the same time, it’s even more powerful, right?

JM: Doubleheader is a train pulled by two locomotives. We also encourage collisions when we try to make the beats connect with artists who don’t usually sing on them. Dominique Fils-Aimé, for example, had never really done space funk disco. The Malian singer Djeli Tapa had never done reggaeton, and she was very happy to have had that experience. We like to juxtapose inspirations that don’t naturally go together, and make it work.

PAN M 360: Samito, a Montreal artist from Mozambique, seems to be a little more than a guest with Doubleheader, tell us about his involvement.

AC: Samito and I work a lot together, I sometimes stay at his place when I come to work in Montreal. We’ve done great business with him in the context of Doubleheader. The vibe was good! For the past few years, Samito has been more interested in electronic music, he has worked in Portugal and France in particular. He has worked with a lot of people, notably with Djeli Tapa, he also introduced us to EIHDZ (pronounced Heidi). He brought us a lot of ideas and vibes.

JM: We wanted Samito to do tracks on keyboards, a bit in the spirit of what he’d done with us beforehand on the Wurlitzer keyboard during a first meeting. When he sang after choosing his beat, however, it gave another dimension to the project. It really did! We were off on a bit of a party vibe. When Samito did his vocals, we saw that we could be just as spiritual while maintaining the party and dance vibe. We found a way to present the sound so that we could appreciate it in a dance context, and also in a listening context. The vocabulary of the project was enriched as a result.

JM: With him, I was a bit intimidated because I have a lot of respect for his work. I had an appointment with him at my studio, but I wasn’t really ready for it. Caleb showed up anyway and I got him to play a beat, a big reggaeton beat. He plugged in his guitar, he played that beat. I was really happy with the result, I suggested he sing and he agreed. He also did some vocal harmonies. I sent this to Arthur who made us a very nice mix.

PAN M 360: We know less about EIHDZ and Quenton Hatfield. Who are these performers on the soul-pop song “Other Side”, which will released in the coming months?

AC: Quenton is a guy from Weymouth, in my part of Nova Scotia. He’s been making music around here for a long time. He’s known in Halifax and he works with us, he’s part of the same group of friends as P’tit Belliveau. Quenton came into the studio, we wanted English voices and I really liked the contrast between him and EIHDZ.

JM: EIHDZ has every talent – she sings, writes tunes, draws surfboards, is part of a core group of songwriters in New York. She does a lot of business!

AC: It started on a beat from P’tit Belliveau, and then I recorded my voice over it. In Montreal, I went to Breakglass Studios to add drums, then I introduced the whole thing to Jean. who refined the sound, put his golden touch on it. Samito did the keyboards, Jean did the bass. A tour de force!

PAN M 360: Presenting such a considerable project with the release of the first extract, “Diamond Flake” with Dominique Fils-Aimé, isn’t customary. The material will be unveiled over the coming weeks and months – why?

JM: It’s a bit like the working method. The beats were created almost at once, and then we did the development. It took a long time to associate these beats with artists, but we’re getting there. Basically, we have an album almost ready and we have enough material for two. Apart from the sung parts, by the way, we have small instrumental episodes from a lot of studio jams. The artists to come? We won’t name them all but I’d say we’ve worked with Maya Kuroki from Teke::Teke, who recites a Japanese poem on it. There will also be the singer Sandra Luciantonio. Other artists will be recruited or revealed later.

AC: I dream of inviting Paul Daraîche and trying something with him! We’ve already included country music, but it would be great to have him… The idea at the end of the day is to mix everything together. You meet a lot of artists, you remix their voices and instruments with the advice of Denis Wolff, without whom Doubleheader wouldn’t exist.

This series of productions will be launched by Ray-On, a Montreal-based company dedicated to artist development – digital distribution, synch, rights management, marketing, consulting. Denis Wolff, former artistic director at Audiogram and owner of the Maisonnette label, is the founder of Ray-On.

JM: The idea of our project goes very well with Ray-On’s concept, to find small niches in many different territories. In the meantime, of course, Arthur and I have to carry out other projects which are our livelihood. So it’s good that Doubleheader is born. We’d like it to last.