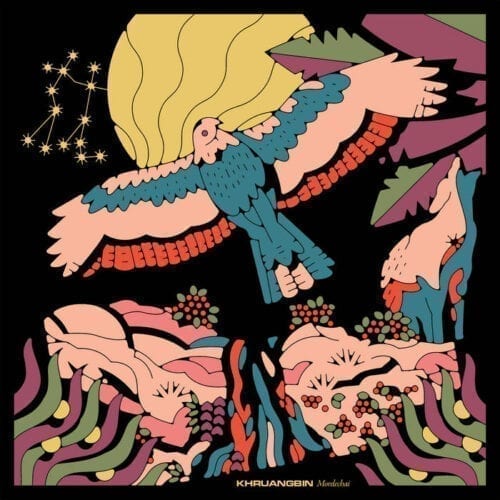 Buckle up and get ready to take off on the Khruangbin flight to Mordechai, a generously grooved album that’s sure to keep you travelling all summer long. One year after the excellent Hasta El Cielo (the dub version of their second album Con Todo El Mundo), the trio Khruangbin – meaning “airplane” in Thai – are back with a third opus, recorded last summer in Texas in their studio nestled in a shed among the cows, and established as the band’s spiritual home. Khruangbin’s success can be explained by its minimalist instrumental approach and its strong multicultural, niched, timeless, and nomadic identity. Flying against the tide, the band has a signature sound (and hairstyle code) of its own, made up of syncopated Congolese guitar, Persian funk, Thai surf-rock from the ’60s and ’70s, a bass based on ’80s Jamaican dub à la Scientist, and a drum rhythm inspired by breakbeat. Usually composing instrumental tracks, the band decided this time to express themselves aloud as well. During a hike with a certain Mordechai and his family, bassist Laura Lee Ochoa – her new name, in homage to her grandfather – experienced a kind of rebirth, a moment of clarity and awakening, which translated into a long reflection spread over hundreds of pages of memories and reminiscences. These pages served as a guiding thread for the lyrics, which occupy a place of their own on virtually every track.

Throughout the album, the trio embodies a sort of quiet utopianism, a soothing force with a brilliant and regenerative aura. For this new 10-song world tour, Khruangbin invites us to pay more attention to the journey itself, rather than focusing on its destination.