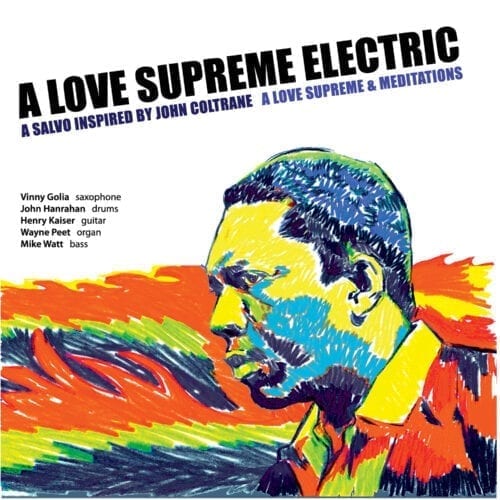 A Love Supreme Electric: A Love Supreme and Meditations, the jazz release par excellence of this Friday the 13th, if not all of November, was produced in Northern California and released on the Cuneiform label by Henry Kaiser on guitar, Vinny Golia on tenor, soprano and baritone saxophones, John Hanrahan on drums, Wayne Peet on Hammond B3 and Yamaha YC-45D organs, and Mike Watt on bass. For several years now, Hanrahan and Kaiser have been reinterpreting John Coltrane’s great mantras, particularly those from the cult albums A Love Supreme and Meditations, released respectively in 1965 and 1966 on the Impulse! label. The former is well known and has had a major impact on modern historical musical culture, although My Favourite Things was Coltrane’s greatest commercial success. The second, Meditations, is much less well known. This recording is freer, more atonal, less punctuated by those melodic incantations that run centuries deep. Coltrane was at the time immersed in improvised contemporary music, and came closer to the free aesthetics of Cecil Taylor, Steve Lacy, and Albert Ayler.  That same year, he released the famous album Ascension, an even more radical break whose development was sharply halted by the saxophonist’s untimely death in 1967. Remember that Carlos Santana and John McLaughlin recorded the “Acknowledgement” movement in 1973. Several other jazzmen, including Quebec saxophonist Yannick Rieu, have also offered rereadings. What do Henry Kaiser and his colleagues do with them? The electric instrumentation featured here transforms the overall sound considerably, while the saxophone and the famous mantra “a love supreme, a love supreme” take us back to the original recording. As far as vocabulary is concerned, free improvisation here bears witness to six decades of refinement and sophistication. Henry Kaiser is a great master in this field, a guide, a formidable musical director in perfect symbiosis with his virtuoso colleagues.