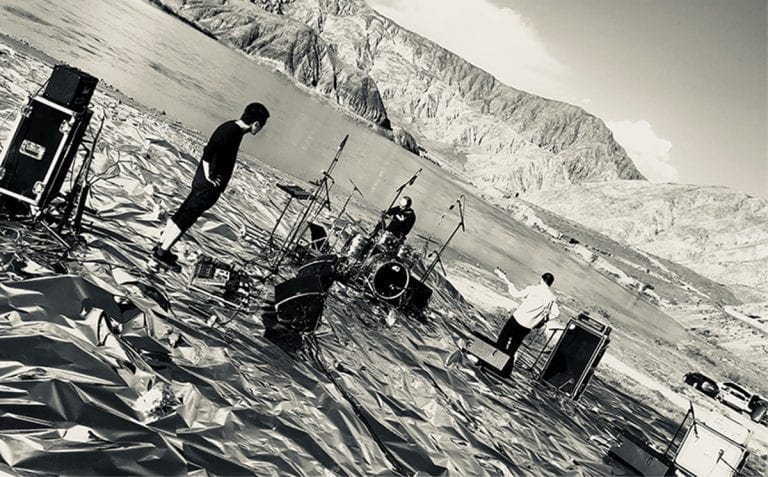 Tation: Written on the wind

Like the enormous expanse of sky over the Tibetan plateau, Tation’s Coordinate Plan 2018 reaches past the horizons of the standard rock-band EP

Tation is a Westernized approximation of the post-rock quintet’s Chinese name 天声, or tiān shēng – “heavenly sound”. Like the enormous expanse of sky reaching past the horizons of the Tibetan plateau on which their home province Qinghai is situated, their recently released Coordinate Plan 2018 extends beyond the borders of the standard rock-band EP. It’s a series of multidisciplinary moments in time and space, selected and executed with great precision during the cold months of 2018, then captured as breathtaking audiovisual mementos. PAN M 360 connected with Tation, who responded collectively with further insights into the four facets of Coordinate Plan 2018.

PAN M 360: Your project Coordinate Plan 2018 is an interesting exercise in contrast and paradox. With exact geographical coordinates indicated, each of the four videos is of a carefully planned event in a very precise place and moment in time. The event occurs, and comes to its conclusion – and now exists as a document, which can be viewed and appreciated by anyone, anywhere in the world, at any time. Also, two of the four videos are filmed in urban environments. The other two, in the wilderness. Artificial, and natural. Local tradition, and global modernity. What is the basic intention of this project?

Tation: We simply wanted to inject a more sensory and experiential dimension into some of the anonymous coordinates we were interested in, or had inadvertently experienced, returning the coordinates to space – a field of real human presence. There’s real thought given to modernization and especially datafication. The coordinate system is a kind of data-based place-name system that creates a network of data-proxy spaces. On the other hand, the coordinates actually cancel out the real space, just like data will eventually cancels out everything that is ambiguous. Of course, there’s nothing we can do to change anything, we just want to redeem or memorize the space through our work.

Coordinate Plan is about experiencing and feeling the space, in which a lot of things will emerge naturally. We cultivate and reshape the space by way of creation, and the work that happens in the space can be considered a commentary on the actual coordinate location. The live performance as an event will forever be entangled with those coordinates, and become a piece of history. There should be a taste of human warmth in the sea of data, and this could be our chance, and probably mankind’s too.

Tation: The piece started from a concept and a title, then the space for implementation was chosen, and we began to plan the specific project only after the space was defined. At that time, the collaborating artist wanted to make some real glass cabinets for the musicians to perform in, but since the whole project was financed by the band members ourselves, except for the free support for the recording equipment, the glass cabinets were really a bit expensive for us, so the artist eventually changed the scheme.

Of course, the scheme after that had the effect we expected, even had a bit more of an unanticipated meaning – for instance, as though the windows were open, but the musicians were tied to their instruments – wasn’t there a feeling of false freedom? The isolated musicians playing alone but in a  group also conveys the image that the physical distance between people is so close, but there are impenetrable “walls”… As for the saxophone, the idea was to add a factor of disturbance to the overall orchestration. Compared to the other works, the structure, arrangement, and orchestration of “Nothing orgy” is more ordinary and disciplined. Without the addition of the saxophone, it would be relatively easy-listening music, a reflection of an unconscious commercial culture. If the overall performance by the band presents a collective consciousness, the saxophone here displays the looming presence of the individual.

PAN M 360: “Flowing” is the most positive and uplifting of the four pieces. The video features an environmental installation by the artist Ma Yongjin, who has used a large sheet of reflective material to suggest an expansion of the Yellow River that absorbs Tation as the band plays.

Tation: First of all, it should be noted that all the works in Coordinate Plan were created specifically for the selected coordinate space, which is one of the principles of the project: to relate to one or more actual spaces. One month before the performance, we and Ma Yongjin, the artist, went to the river for location research. It was a beautiful day, and the water flowing under the sunlight brought us an inner auditory sensation, a canonical feeling. There’s a Chinese proverb, “chuan liu bu xi” (“the endless flow of the river”), which describes the never-ending, cyclical state of the river. That circumstance conveyed a lively, hopeful feeling to us, which we brought into the music as the “positive and uplifting” style, like you said. Following the music, the artist came up with the idea of extending the river. We could say that we worked with the artist to divert the Yellow River at those coordinates through music and environmental installations, and we created a one-day tributary of the Yellow River.

PAN M 360: You collaborated with the poet Zhang Zheng on “My heart is not like me”. His words, and the heavy-metal aspect of the music, suggest some very intense emotions. The physical environment of the video seems to be a ruined warehouse or factory.

Tation: It was the workshop of a dying state-owned factory, and although production hadn’t stopped completely, the end was in sight. We (the post-’80s generation) grew up during a period of social and ideological change in China, especially in the remote and backward western regions, and we seem to have a deeper discomfort with this change. Such a condition of anxiety, or symptom of division, was always present while we were growing up. So when we first became familiar with rock ’n’ roll during our teenage years, we could easily find a sympathetic response while listening to restless music like metal, punk, and garage rock. This condition, or state of division, exists in our lives all the time. When a person is torn apart, he shrieks, but this shriek is utterly ineffectual, like a baby’s cry, an impotent pain, and at the same time, this shriek has no direction because we don’t know what we are really stung by. So Zhang Zheng’s poetry seems to answer our question by providing a direction for this shriek, which is the deep darkness of the mind. Like psychotherapy, the poem guided us to a passionate conversation with our past, through the heavy metal that we used to love, in this familiar, nostalgic factory.

PAN M 360: Filmed at Qingsha Mountain, at a very high elevation, “Flying around flame” is a collaboration with the conceptual, multidisciplinary artist Liu Chengrui. This one seems to be the most connected to your region’s traditions and folklore.

Tation: This is a local customary dance celebrating victory, in which villagers act as messengers of the wind god, raising their hands and stamping their feet around a bonfire, yelling and circling, begging for the god’s blessing. The work was executed in artist Liu Chengrui’s hometown, and he said about the work, “I was born at Qingsha Mountain – my childhood time and space is complete, though a little ragged now, but these stories I imagined in the background of Qingsha Mountain, have now become part of reality. ‘Flying around flame’ was an outburst to rebuild new memories for Qingsha Mountain.”

He knows the land very well, he knows many of the villagers who attended the show, but everything there was unfamiliar to the band, and although we’d communicated with the artist beforehand, we couldn’t anticipate it – what exactly would the scene be like? So we chose to improvise on that day, rather than a set piece prepared through fieldwork, like the other three works. The unstructured, improvised performance is like throwing yourself into a gravity-free space, and into the ritual that’s created by the artist. The sound of the wind, the cries of birds overhead, and the shouts of the “wind messengers” gradually brought us into a kind of oblivion in our imaginations, and the performance finished automatically. In addition, the temperature of -15°C forced us to make some unusual changes, such as having to wear gloves to play, but the rough sound was surprisingly suitable for the atmosphere of the day. All in all, it was one of the most exciting and memorable days of the whole Coordinate Plan 2018.

PAN M 360 thanks Xige Yi for her translation assistance.