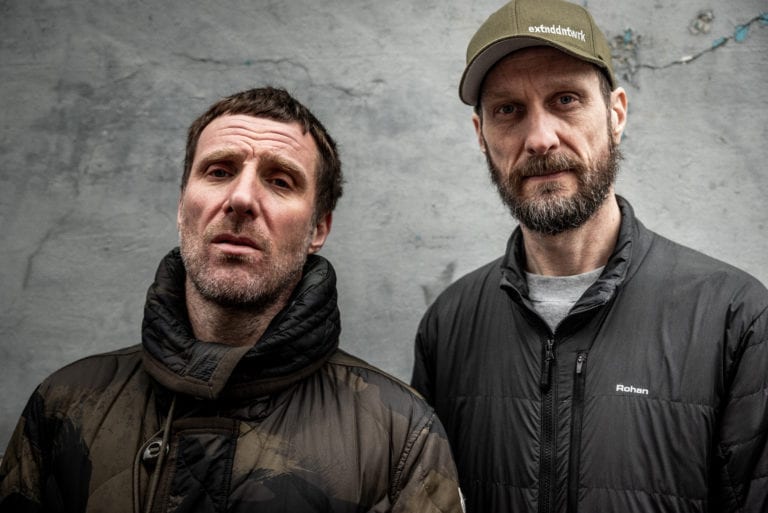 With the double album All That Glue, Sleaford Mods get stuck on the compilation game, finally making available many of their songs that are almost impossible to find elsewhere. Fans won’t be disappointed, since the band has added several unreleased bonus tracks. The always very voluble Jason Williamson tells PAN M 360 all about it.

We reached Jason Williamson in Nottingham, stuck at home like everyone else. Dressed in a dressing gown, the vindictive singer of the minimal rap-punk duo he forms with beatmaker Andrew Fearn talked with us about glue, politics and Brexit, his enemies and of course the Sleaford Mods.

PAN M 360: Jason, can you tell us a bit about the album and its title?

Jason Williamson: All that Glue is the name of the first song we ever wrote, me and Andrew. It was written in 2012, or maybe earlier, possibly 2011. It’s going to be available as a flexi-disc on the ‘gold ’ version of the album. We thought it was a good answer to what Sleaford Mod is. There’s obviously echoes of punk in it. It’s a very DIY-orientated style of music, very minimal, very street-sounding…

PAN M 360: Was it difficult for you to choose among all your songs? You have a good ten albums and four EPs.

JW: It was not too difficult to choose the songs for the album. We just didn’t want to put out a greatest-hits album, or a singles album, you know? We are not a greatest-hits band for a start, we haven’t sold millions of records, we are not internationally known on a larger scale and we didn’t want to do a singles thing because we thought it was too obvious, so we collated a lot of stuff from all our albums, along with some singles and also some unreleased stuff.

PAN M 360: Where do the unreleased songs come from?

JW: These more obscure songs were recorded mostly when we were doing albums or EPs, between 2013 and 2016, and we thought that some of them deserved to be put out because they’re just as strong as the albums tracks. We also wanted to give an atmosphere to the period of time, which is from 2013 to 2019. There are no live songs on the album, but all the songs have been remastered. A lot of these songs are very difficult to find today because you can’t get the albums they’re taken from anymore. So it was important for us to make those available once again.

JW: None of the stuff I did before Andrew is on this album though. There’s actually a double album called Retweeted, where it’s all pre-Andrew stuff on it.

PAN M 360: On the albums recorded before Andrew’s arrival, you had a different sound, with more sampling and sounds that were often punk and ’60s, whereas now you advocate a much more minimal, hip hop-like musical approach. Have you thought about going back to your sound from the first albums?

JW: We tried it a couple of times but it doesn’t work, it’s just not us. Andrew’s music is very personal. And it doesn’t need fucking with a lot. And I think using guitars the way I used to does not work. He does use guitars but in his own way. There was a time and a place for that music. Things move on, at least that’s how I look at it.

PAN M 360: You usually attract an older audience, which you don’t see so often in concert halls. Why do you think people over 35 like you so much?

JW: I think it’s a kind of music older people relate to. It’s got a lot of history to it, a lot of punk and post-punk. That first wave of authentic ’70s punk, I mean. It possesses a lot of that, and a lot of new-wave punk as well. That’s generally why we get a lot of older people at our shows.

PAN M 360: Many of the Sleaford Mods’ lyrics have a socio-political angle. Do you think that music can change politics?

JW: No, no. I think music can change people’s opinions a little bit but I don’t think it can change politics. It’s not a powerful enough machine in order to shift the monster that is politics. Politics are complacent, and it affects every little bit of our lives. Music too, you could argue just as well to a certain degree, but I don’t think music is a big enough vehicle to go into combat against politics. But there have been times where it shifted the social landscape. There have been times where it made politicians aware of it. But generally speaking, as we go forward, as the world becomes smaller, more controlled by right-wing factions, it’s not something that’s on an equal playing ground.

JW: I don’t like it, it’s horrible. I voted to remain in the European Union. We’re not prepared for it at all, there is no justification for it, absolutely none. If there was a justification for it that made sense, then fair enough, but there isn’t! It was just political games played for and by the elite. Its a neoliberal idea that is just stupid. It’s not for the people, it’s for a few business minds and that’s it. It’s gonna be a disaster, absolute disaster.

PAN M 360: In your lyrics, you often flay artists, politicians and other personalities in passing. Do you think you have a lot of enemies?

JW: Yeah, I would imagine there are some people who don’t like me very much (laughing). You can’t blame them, you know (laughing again). I wouldn’t like me very much. But generally speaking, fuck ’em! It’s a competition, come on, let’s see what you got, what have you got? Are you bleeding when you do this, because if you’re not, then it’s of no interest. A lot of people out there claim to be something that they’re not, which is a problem. It’s fine if you wanna be Britney Spears or One Direction, that’s fine, there’s a place for that music, but don’t try to say you’re something else when all you are basically doing is that. That’s what angers me.

PAN M 360: Your words are never limited to a few banal sentences and avoid the many clichés. What inspires you? Does this pandemic inspire you?

JW: Life! And stuff I’m listening to now, sometimes. Before, I would only listen to hip hop or punk, but now I listen to a whole range of things, because I’m a different person, I’ve grown more, I’ve started communicating with other musicians and not necessarily people that play the same music as me. Yes, this pandemic does inspire me, in a little way. We’re gonna see what happens. This is such a massive moment in history that it has to be handled correctly. You can’t just write some shit about it. It’s gotta be communicated in a way that will make me remember it for what it was.

PAN M 360: For the first time in your career, you made Top 10 with your previous album Eton Alive. How does it feel, after that?

JW: (laughs) It’s alright, it’s nice to have a top-ten. Look, I’ve got it tattooed on my arm, Eton Alive. I’m really proud of that, you know?  Moving forward is more of an issue. You’ve got to constantly be aware of the music and not let the quality of it slip. You got to constantly please yourself and ask yourself, do you really like this still? Is this something you’re still interested in? All of these things, I’m more concerned with.

PAN M 360: Do you feel pressure for the next album? Do you have one in the works?
JW: No, because we don’t really put ourselves under any pressure. People expect a good album, and that’s what we’ll do. We’re not going to reinvent ourselves because there is no point, we don’t need to. We’re not a massive stadium act. All what people expect from us is to be Sleaford Mods, and that’s what we’ll continue to be. Yeah, we’re working on one now. We were fortunate to go in the studio at the start of the year, so we managed to do three good tracks. Now Andrew is sending me some new music so hopefully lockdown restrictions will be lifted a little bit, so we could go to the studio, at least just me and him and someone else.