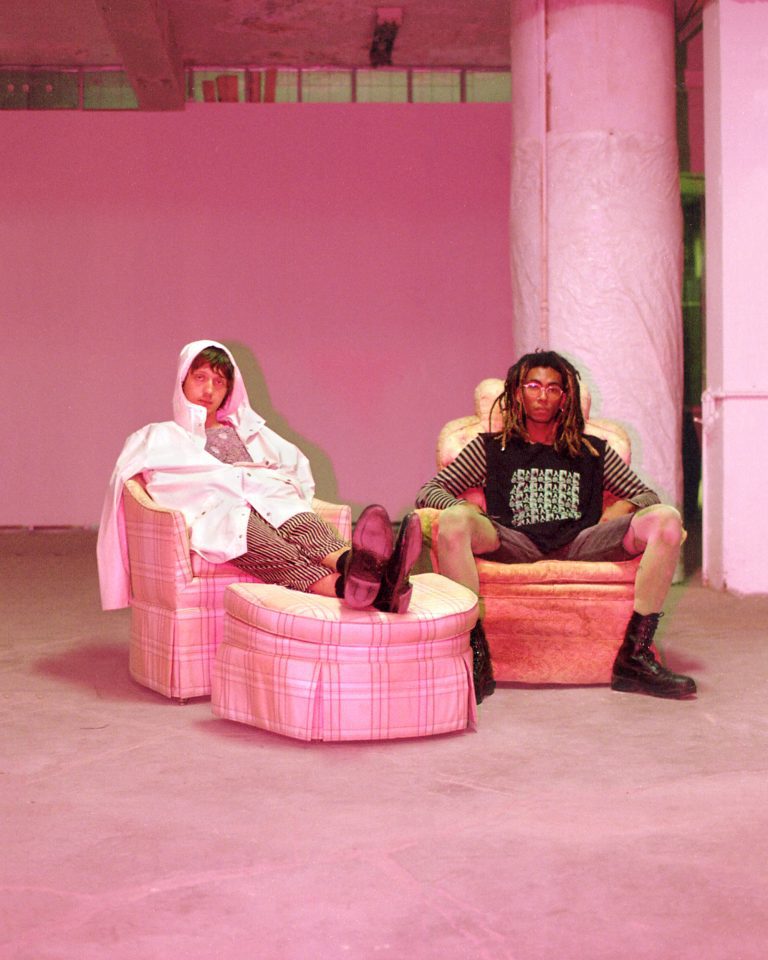 You could walk outside your door right now, pick up a small pebble, and toss it across the street, and the chances you hit the dwelling of a Montreal musician are pretty high. Many of them make Lo-Fi music; music that sounds a bit “dusty” due to production restrictions—or in the case of the duo project Tinkertoy Fog Machine from Kai Thorpe and Tyrin Kelly—on purpose.

Living up to their name, Thorpe and Kelly are meticulous ‘tinkerers,’ using DIY recording techniques until their music sounds like a beat-up and forgotten cassette that has been manipulated and warbled from playing it too many times. It’s psychedelia that kind of sounds different with every play. Just check out their 2021 release Fingers Crossed.

The two bandmates are definitely on the same wavelength as longtime friends, roommates, and members of the local dance-punk group, Crasher, and backing musicians for Boyhood, an alt-rock group from Ontario.

This past summer, Thorpe, and Kelly have been refining the Tinkertoy live show and are planning on going back into the studio with hopes to record more material, meshing with their DIY aesthetics.

We chatted with both Thorpe and Kelly before their performance at Pop Montreal on Oct 1.

PAN M 360: How did Tinkertoy Fog Machine get its start?

Kai Thorpe: We’ve been playing music together since we were like 15. We met in high school so this is kind of just like a continuation of like all these projects that like kind of ended up changing their names over the years so yeah. I guess we’ve been Tinkertoy since 2017. That’s when we moved here from Ottawa.

PAN M 360: And is the music created through jamming or made on a computer program? I can never tell with Lo-Fi stuff like this.

Kai Thorpe: This is like computer song music, but not completely. I feel like that’s kind of discrediting it in a way in my books because I don’t personally find that very glamorous, but the songs were definitely not thought up on the spot. I think maybe we like we jam at the beginning of it to get the first idea, but then it’s all totally layered in Ableton. But then for recording, we have like an eight-track reel to reel that we end up re-recording into.

Tyrin Kelly: Yeah I think the initial ideas come from Ableton demos and loops but then we try to recreate it with more live-off-the-floor energy. Our roots are analog things. We like analog.

PAN M 360: Ah you use reel-to-reel. The recordings sound very vintage too, like finding a dusty cassette under a bed. Not dated, but Lo-Fi and washed out for a purpose.

Tyrin Kelly: We actually spent like a month just like re-amping … like this was kind of our like experimental recording stage, but we’re trying to like teach ourselves like, how to record ourselves. So we’d like to be re-amped like every single instrument 10 times without thinking about getting it done in any way. So we would send vocals and like drums through guitar amps. And then if it sounds bad we discard it, or if it sounds kind of good, we’ll save it. So we can kind of just do that over everything. Just to give a kind of a more like, like you said, ‘dusty vintagey’ vibe.

Kai Thorpe: I feel like it paid off in the end (laughs).

PAN M 360: It kind of reminds me of really, really old Tame Impala demos. Before, he was huge. So do you have a lot of l older vintage equipment? I guess you have the reel-to-reel but any other analog kind of stuff that you play around with?

Kai Thorpe: We have like outboard gear like preamps and some mics. I built some of the preamps and compressors too. Also for like our instruments, I think I have the same guitar the Tame Impala guy has. It’s a Hagstrom 1970 I think? I got it for like 600 bucks from a guy in Longueuil, like an old rocker guy. Now they cost so much.

PAN M 360: Do you guys handle the lyrics together as well?

Kai Thorpe: I’d say everything is like a 50/50 split. Like everything is shared between Tyrin and I. It’s definitely a joint effort.

Tyrin Kelly: And I just wanted to say that the two singles we have out right now, we spent a lot of time on them and maybe overthought them a bit too much? But it was a good process of kind of reinventing our sound so it’s cool to hear that it sounds a bit unique because it was a lot of tinkering around with it.

PAN M 360: Well I’d say the name Tinkertoy Fog Machine makes sense then if you’re constantly tinkering with your sound. And you guys have a silkscreen printing project together as well? Is it linked to Tinkertoy or do you do it on the side?

Kai Thorpe: Aesthetically it is, but this is mainly Tyrin’s project [Trap Door Printing] but it’s all one thing if that makes sense?

Tyrin Kelly: Yeah I feel especially with screen printing specifically, there’s so much correlation between it and like, DIY music. So yeah, I guess we did we printed the cover art. A lot of show posters on street poles voters. And, like just references to the early Montreal scene … there were a lot of like silkscreen posters. I just like the idea of like keeping that alive.

PAN M 360: So would you say you’re going to take the Fall and Winter to keep playing live and then look at recording some new material? Another two singles or a full-length LP?

PAN M 360: For sure. What’s the live show at POP Montreal going to be like?

Kai Thorpe: When people see us now they always say ‘Wow I was expecting something totally different.’ It’s more of a psych rock vibe with lots of tweaks that need to be sorted out. We have a four-piece live band. So we have like a keyboard player and a guitarist, and then I play bass and sing and Tyrin plays drums.

Tyrin Kelly: I feel like we play Fingers Crossed and then everything else is pretty much unreleased. Like work to try them out live recording them, I guess. And yeah, I guess we spent the summer just trying to be better by playing live a lot. That’s kind of been our main focus for now.