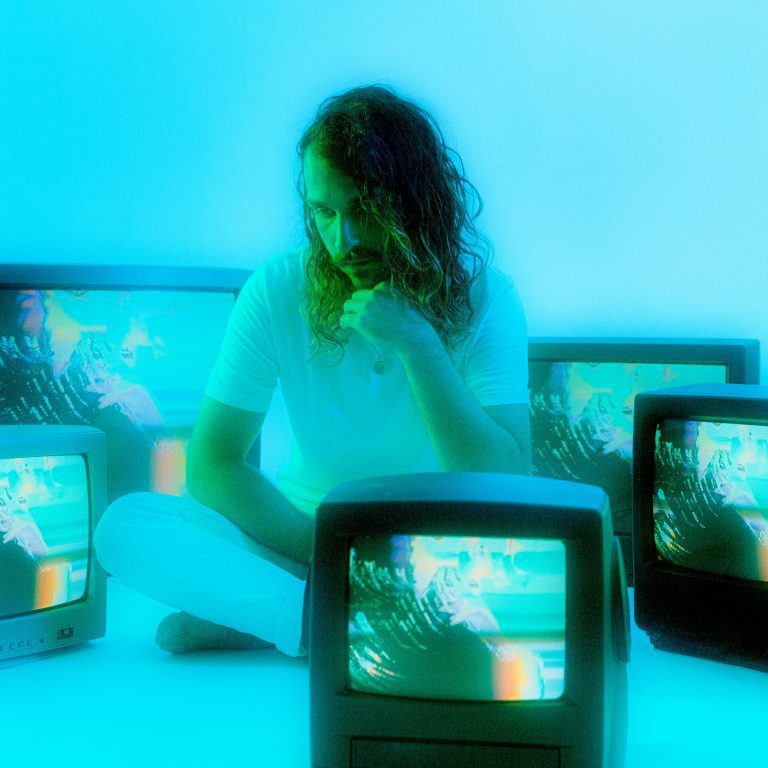 When he’s not busy working as a producer, mixer, and engineer for various artists across Western Canada, Mario Lepage is working in the studio on his own indie-meets-psychedelic-funk project, PONTEIX. In the small, rural Saskatchewan town of St. Denis, Lepage went for a one-man-show approach to his latest EP Amélia, meaning he wrote and played every instrument, a first for his solo work.

Lepage is a francophone artist who sometimes incorporates English in his music ,and has always strived for a seamless, grooving bilingual sound. Language and the identity surrounding it has always been very important to him and for this EP, he co-wrote the lyrics with Anique Granger, a well-known francophone artist and audio-documentarian, who is also from Saskatchewan, and now makes her home in Montreal.

Lepage had some time to chat with PAN M 360 about the Amélia EP before his performance at Coup De Coeur Francophone, and talked about some of the lyrical themes on the EP and why he’s not a fan of birthdays.

PAN M 360: Hi, Mario. We actually spoke a few years ago at BreakOut West. Back then you had one EP out called J’orage, and now you have one full-length, Bastion, and this new EP, Amélia. So tell me, what inspired the Amélia EP?

Mario Lepage: Yeah, so every sort of release has had its challenges. I guess you could call them self-imposed challenges. So for this one, I tried to do everything myself, from engineering to performing every single instrument, to the entire production. With exception of the single “Les années” that’s out now. I had my friend Blaise Borboën-Léonard do an amazing string arrangement on it that really tied the song together. Having produced many francophone artists from Saskatchewan and Western Canada, I was kind of used to playing a lot of the instruments on records, and that’s kind of just always how I’ve done things. However, it’s really hard, or I find it really hard to have the exterior producer when you’re doing it for yourself, when it’s your own songs.

PAN M 360:  So you’ve decided to kind of collaborate with producers going forward?

Mario Lepage: Up until now yeah. Collaborate with and surround myself with producers to do the project. So with this release, I think I really developed that bird’s-eye view of the whole work and trying to make it as a whole on all on my own. I co-wrote lyrics with Anique Granger, who is an amazing singer-songwriter from Saskatchewan who lives in Montreal. So yeah, I learned I learned a lot from people that have helped me over the years and I tried to to do something a little bit different this time.

PAN M 360: And is Amélia a pandemic album? That is to say, you worked on it during the pandemic?

Mario Lepage: No, I started working on it I’d say two years ago by just recording some some rough ideas, some rough demos. Maybe recording a guitar and a drum beat or something like that, and kind of leaving it for two months or something like that. It was all very sporadic. The pandemic all kind of felt like a blur and I did work on it then, so I guess you could call it a pandemic album, but not thematically.

PAN M 360: And so what are some of the lyrical themes on Amélia ?

Mario Lepage: Yeah, there’s a lot of love thematics, which I haven’t really delved deep on. Like “Les années” kind of talks about my undying love for the woman that I married over the summer and when I wrote that song, the moment I decided to marry her, or ask her to marry me, I didn’t know if she wanted to marry me just yet. The song “Amélia” is me reflecting on relationships, like friendships and family. It was about me missing people during the pandemic and remembering how genuine we can be with each other in the moment, but you never really know if you will see that person again. It’s a song that creates a story about someone who I never had the chance to tell them how much I appreciated them. And then by that time, it was too late.

PAN M 360: I think that’s a very relatable theme people felt during the isolating times of the pandemic. Like taking people for granted.

Mario Lepage: Absolutely. I always make a joke about how I’m not a super fan of birthdays because it’s putting that into practice of celebrating that person for only one day. Why one particular day when it can be everyday? Just be extra nice all the time.

PAN M 360: You’ve always had a bilingual aspect to your music. Most of the songs are sung in French but the odd one is in English, but “Les années” uses both. Did it just come out that way or was it on purpose?

Mario Lepage: I find that whenever I am writing a song or working on music, I tend to create  phonetic words that that work well together. For this one, it just kind of clicked and worked with the rhyming scheme in French and in English and the phonetic meshing of them both kind of felt seamless and very natural. And coming from Saskatchewan, French is my first language, and our French has a lot of English to it. There we blend a lot of both languages. So it feels now like it’s kind of like a homage to the way that we kind of speak amongst each other. I think that people who are francophone from Saskatchewan tend to sort of blend both both languages together, and I find that that’s really beautiful.

PAN M 360: And that’s where your artist name PONTEIX comes from?

Mario Lepage: Yeah, so i’m in St. Denis and Ponteix is a town more near the American border. And it’s got a similar story to St. Denis. I would say, all of the francophone communities, small rural communities in Saskatchewan, kind of have all of the same story and are living in a sort of a similar situation. And it was, phonetically, the best-sounding French town  I could think of. I chose the name because I wanted something that represented, maintaining your identity even though you are surrounded by something that’s different. Something that goes against who you are, what you believe in, your culture.