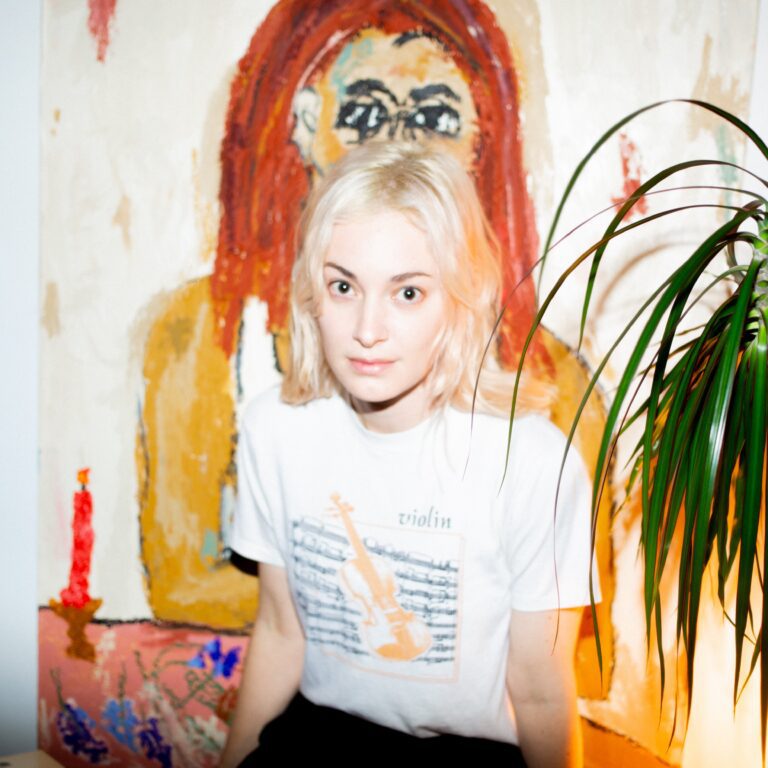 Men I Trust is a local indie group made up of friends Jessy Caron, Dragos Chiriac, and Emma Proulx. Since their self-titled debut in 2014, the group has released three studio albums, the most recent being Untourable Album almost a year ago, and has found great independent success for their indie rock meets airy jazz-pop sound. They are also famously without a PR team and label, taking care of all of the touring, media, and releasing duties themselves. Perhaps this independence has helped shape their success.

Men I Trust just released the “Hard To Let Go” single before their performance at Osheaga so we spoke with Emma a bit before their show on Sat. July 30.

PAN M 360: How did Men I Trust form and is there a story behind the name?

Emma Proulx: Jessy and Dragos started the band in 2014 and I joined it in 2015. In high school, they used to produce hip-hop and dance songs for fun and decided to turn their hobby into a full-time project while studying at the university. They were looking for a positive-sounding name and came up with “Men I Trust”, “Men” referring to mankind, after seeing that the “Trust” name was already taken.

Emma Proulx: Jessy always had strong jazz influences in his songwriting, having studied Jazz-Guitar in college. His guitar tones for this one are definitely funk-jazz inspired. We reached out to Gabriel Desjardins, an incredibly talented jazz pianist, for the recording of the piano solo. He improvised about 5 minutes of music in one take, and we etched the final solo together afterward. His style of playing is incredibly “airy” and we’re super happy with the end result. The song is about a friend who took a break after burning the candle from both ends.

PAN M 360: How do the songs translate to a live setting? Some of them on Untourable Album are very soundscapey.

Emma Proulx: Most of the songs sound extremely close to the originals in a live setting. We’re able to re-create most soundscapes with effects pedals. When we change the songs a bit from the originals, it’s usually for fun. After playing songs for a while, sometimes we come up with new ideas and re-interpret them differently live. For example, we added a few live solos that aren’t recorded on the released versions of the songs. Inferring from the crowd’s response, these new moments are usually high points in the live set.

PAN M 360: You’re known for not having a PR team or label and making all the decisions as a band. For example, you can write a song, record it, and release it the same day if you wanted to. What’s it like having that freedom and do you think it contributed to your DIY success?

Emma Proulx: It’s amazing to be able to be in sync with the audience for each release. When we release a song, it’s still new to our ears and thus we feel in sync with the audience, for whom the song is new as well. Time goes fast. When having to wait a few months to release something, an artist has time to move on and the material may feel old to them on the date of the release. I don’t know if that contributed to our success directly, but being able to own 100% of our royalties allowed us to quit our day jobs to focus solely on the band around 2018. Owning a fraction of that percentage might have delayed that move by a few years.

PAN M 360: What is the songwriting process like in the band? Do the guys write the music and you put lyrics to it? Or do you write it all together?

Emma Proulx: At the beginning of the band, we wrote the lyrics first more often than not. Nowadays, the music comes first most of the time. For us, the end result feels more musical that way. A few songs on the Untourable Album had some prior versions of the lyrics written first, but they were adapted to fit the music at some point. It’s a (fun) challenge to adapt lyrical ideas and stories to the song format without losing meaning or sacrificing content.

Emma Proulx: Yes and yes! We will probably release two new singles by the end of this year.

PAN M 360: I love the song “Tree Among Shrubs” on The Untourable Album. What was the inspiration behind the lyrics for that one?

Emma Proulx: It’s a concentrated version of the stories of two men I know. They both moved to West lands to become key, strong figures in their small community. People look up to them, but few know about their hardships.