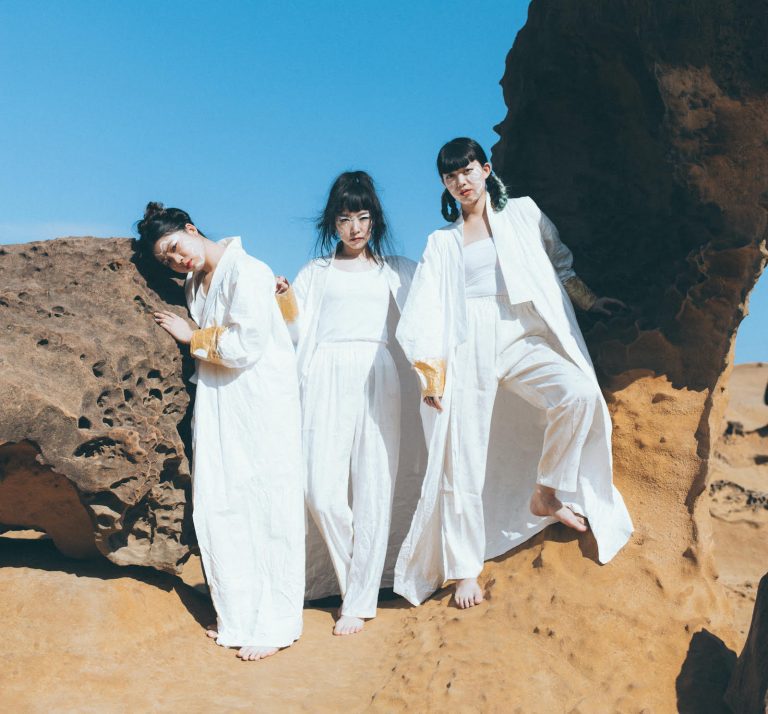 Like a new planet revealed in the far-flung reaches of the solar system, Tokyo trio KUUNATIC are a fairly recent and eminently worthy addition to the constellation of Japanese psych-rock, and the exciting pan-Asian wave of alternative music immersed in the continent’s folklore, faiths and ritualism. Founded five years ago, the tribal-psych trio of keyboardist Fumie Kikuchi, drummer Yuko Araki and bassist Shoko Yoshida (all three also handle vocals) has given shape to a strange yet engaging auditory realm sewn together from elements of ancient traditions from around the world, the more exploratory music of recent decades, and their own uninhibited imaginations. Their latest release is the album Gate of Klüna, produced by Tim DeWit of Gang Gang Dance, and stepping through that gate leads to an entire world, one that’s equally familiar and mysterious. PAN M 360 connected with these emissaries from the planet Kuurandia for further insights and revelations, which they provided collectively.

PAN M 360: Gate of Klüna tells a specific story over the course of the record, an arc of the history of your imagined planet Kuurandia. Can you briefly summarize that story cycle?

KUUNATIC: Our first EP’s title KUURANDIA is the name of a fantasy planet we live on—like a prologue of a story, the last song of the EP, “Battle of Goddesses”, was about Armageddon of deities, and as a result, a new planet, Kuurandia,was born. So we extended the concept for our new album Gate of Klüna, which is inspired by ancient myths, and the story goes like this… Sacred bells ring at the dawn of a new era. Our new empress rises with magical refrains. As the planet prospers, Kuurandians hold a ball under the full moon and celebrate the richness of the harvest. The peaceful time seems to last forever… until a gigantic volcano emerges in the middle of the moonrise mountains. KUUNATIC chant enigmatic mantras like praying, to prevent its eruption. However, unidentified invaders appear from its roaming lava, and the war of predation begins. KUUNATIC fight and release their magical spells, and finally they win the battle. Then three pythonesses sing a mystic triumph song, leading their people to a deep, dreamy forest.

PAN M 360: You are not alone among artists in presenting to your audience your vision of a utopia, an imaginary land or even world (such as Kuurandia). Such an imagined place is not necessarily a paradise, but here is clearly a reward to exploring these ideas, for both artist and audience. For the members of KUUNATIC, what is the value in doing this?

KUUNATIC: For us, music is a surreal experience. You have your own reality, but you can escape to a different world while you create or listen to music. You know it’s a fantasy, but we would like to think that our music is something that coexists with your reality, a parallel universe you can experience. It’s very dreamy and thrilling at the same time. When the reactions from listeners come back to us, we can recall the surreal experience again as well.

PAN M 360: There are certainly uniquely Japanese elements in KUUNATIC’s music. I hear minyo, traditional festival music, in “Dewbow” and “Full Moon Spree”, for instance. But I also hear elements borrowed from other folkloric and spiritual traditions as well, from around the world. Can you offer some insights about this?

KUUNATIC: The image of Kuurandia is the ancient but also the future. There are no geographic borders on this planet. Probably, we are trying to picture a utopia by musically fusing cultures scattered all around the world. This always makes us realize that completely unrelated cultures can have very similar customs, and that the world is actually connected. Playing music with a primitive sense is also our main theme to embody mystical feelings that all human beings can have in common.

PAN M 360: Similarly, you use multiple languages in your lyrics, names and titles. Sometimes the languages are even mixed together. Japanese, English, Finnish, I think there is even some indigenous Hawaiian in the lyrics to “Lava Naksh”. What do you feel is the purpose of language in the art you make?

KUUNATIC: Each song we compose has a story and we like to adopt languages according to the narrative. Using and mixing different languages simply makes sense to us for colouring and shaping the tale. Some lyrics that you might think are Japanese are actually in our own language called Kuurandish, which is based on Japanese phonology. It is also a very fascinating experiment for us to find out how people will perceive our ideas, listening to our music and the languages.

PAN M 360: There are other current Asian musical artists mixing psych-rock with traditional and folkloric elements. Examples are Mong Tong from Taiwan, or Haepaary and TENGGER from South Korea. Do you feel a particular affinity or kinship with these bands? It sometimes seems that such music is more appreciated by foreign audiences than at home.

KUUNATIC: Our main concept is “fantasy”, so it might be slightly different from their styles, but we are big fans of tribal and traditional music, so we really like their music too. Music from different cultures often sounds very exotic and more exciting to people with other cultural backgrounds, that’s how we feel. But this fact also makes us cherish our own roots more.