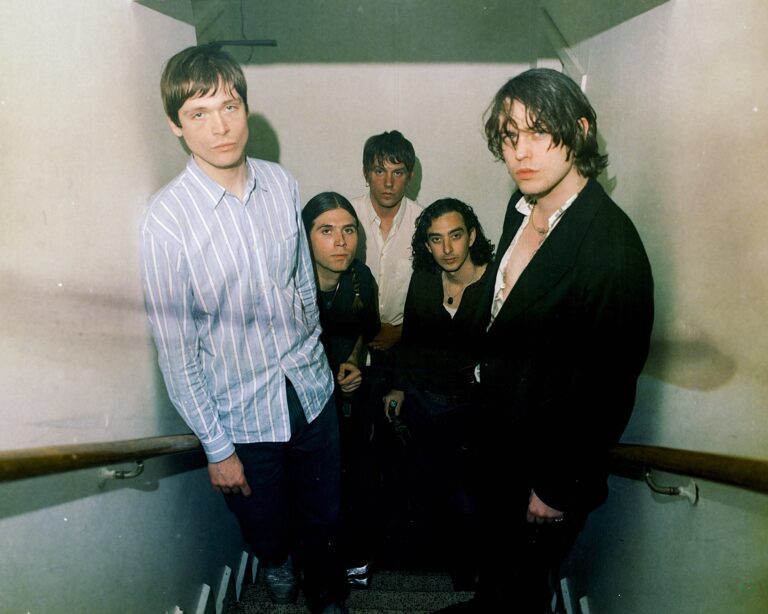 When they first started out back in 2008-2009, Copenhagen post-punks, Iceage, were just “lashing out,” throwing sounds at a wall to see what felt right and stuck. Vocalist Elias Rønnenfelt can’t even recall some of the phrases he came up with and where their inspirations lay. For that period he calls them “blindfolded,” like a crooked bird with no eyes, flying aimlessly. This could be why they became known as a band that took sonic risks and always wanted to journey deeper and deeper into the musical fray—when in fact, they had no real idea what they were doing.

Flash forward to now and Iceage’s fifth album, Seek Shelter, has been out for exactly a year and has received critical acclaim for toeing the line between post-punk and straight Britpop and being the band’s most “accessible” album. As a band born out of strangeness and finding influences wherever they venture, Iceage relies yes on the melodic janglings of guitar and bombastic drums, but also Rønnenfelt’s approach to lyricism. He leaves an intentional vague cloud over the meanings behind his songs, using them as a form of therapy for himself that he sometimes completely forgets.

We spoke with the messy-haired Rønnenfelt—before the Iceage show this Sunday at Ausgang Plaza—while he was in Copenhagen drinking wine and smoking (at what we assume was a house party) about his evolving lyrical strategy, people’s interpretations of his lyrics, and using music as a vessel to document his own insanity.

PAN M 360: Would you call Copenhagen an inspiring city for an artist such as yourself?

Elias Rønnenfelt: I mean, if I feel like any city might be, but it’s home. And then it’s the surroundings I grew up in as an artist. So yeah, I think it’s inspiring. And it puts me in a good mindset, but there’s also a lot of like village mentality and part of the culture that’s quite a bit behind. So it’s also inspiring in the ways that there are things to dislike.

PAN M 360: I know you write your lyrics kind of all in one go for the records. Do you have to retreat from home to do that?

Elias Rønnenfelt: That’s what I’ve been doing for the past few albums. When I know the date that we’re going into the studio, I will usually retreat somewhere and work on all the lyrics all together to try and create some sort of not narrative, but just so it isn’t too scattered, that it’s coming out of one mindset. I never really found a formula that permanently works. So you always have to find a new angle to attack from no matter what. But, I mean, sometimes you’re in a place where you have a certain kind of lucidity, and things just come to you other times, you have to work for it.

PAN M 360: Do you believe songs evolve based on world events? Like the interpretation of them that is?

Elias Rønnenfelt: Like in hindsight or as you’re writing them?

PAN M 360: Hmm I guess in hindsight for everyone else? I mean Seek Shelter is regarded as a pandemic album, but it was written before any of that happened.

Elias Rønnenfelt: I think that album ended up being a pandemic album because it came out within it and I’ve heard from a lot of people that they thought it was freakishly close to the newfound reality they were sitting in and the title itself is a little … the needle on the nose. But that was completely unintentional. But I think the context is always tailored by the individual to fit … if you’re feeling a certain kind of way or if you’re heartbroken or something like that. The song is yours and now about you and your specific condition, and that’s kind of the beauty of it.

PAN M 360: Right. When you release a song to the world it’s not really yours anymore and people can interpret it any way they want. Does that excite you at all?

Elias Rønnenfelt: I’ve had people coming up to me at concerts or people writing in, and they will cry gracefully, and generously explain that a certain song is attached to the loss of a friend, or a house cat, or even a period that was a transition, or that song became attached to that period of their lives. And that’s, like, the biggest compliment you can get. That the song had the ability to sort of mutate into the individual’s situation.

PAN M 360: And you can never expect that when writing a song.

Elias Rønnenfelt: No I would never write something that is intentionally or universally vague and be like ‘Oh many the people are going to get this one (laughs).

PAN M 360: So why do you write? I mean obviously, you’re a musician and it’s your job but is it a cathartic release for you. Is your mind always racing?

Elias Rønnenfelt: Yeah, the mind is always racing, and it’s become a sort of vessel. And one of the few ways that I have at my disposal to make sense of things. And if I don’t distill my emotions—and my emotions are usually quite hard to do defer. I have never seen a psychologist or anything like that, you know, so I’m not too smart but I would say songwriting is one way to try and make this whirlwind of feelings or things you live through have a way to narrow it down and make it tangible. So, yeah, I know, if I didn’t do it, I think it would go mad.

PAN M 360: There are many little references to religion in Iceage songs, almost from a sort of … omniscient point of view. Are you a religious guy or do they just sort of creep in?

Elias Rønnenfelt: I wouldn’t be defined myself as religious, but neither specifically nonreligious either. I come from a Catholic background and I went to Christian School. So from an early point in life, that imagery was just kind of something that was used to make sense of things and, you know, in that kind of religious upbringing, those stories from day one
brought to make sense of the little things that we go through here and in mundane normal life. So it’s just kind of something that happens. That imagery is something that I find natural to apply, but sometimes I get tired of it like I’ll be writing and then like, ‘Oh no. Here I go on about this Catholic-sounding shit again. But I guess it’s part of my
process.

PAN M 360: Was it nice to have a break from touring due to the pandemic. You guys were hitting it pretty hard for like, quite a few years. It seemed you were touring forever?

Elias Rønnenfelt: We’ve been road-dogging it since we were like 17 and 18, playing usually between 100 and 150 shows a year. I think it was ultimately good. I think it might have saved this in a way. I’ve always been quite addicted to running away and having a very hard time sitting still anywhere. As soon as I had some time in my life that could actually be used for some peace and quiet, I would immediately seek elsewhere and try and be on unsteady ground. But we were forced to be steady and it wasn’t as bad as I thought. But you know, then after a year, whatever, then you’re like, ‘Okay, I think I’ve learned my lesson. Now. I’m ready to get back at it.