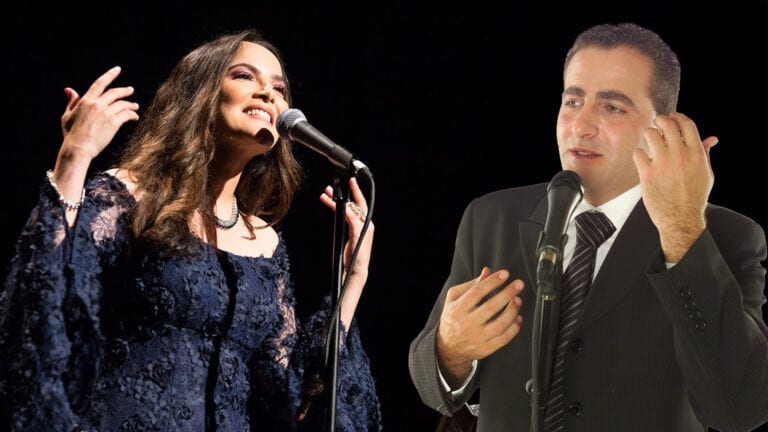 Discover the Sinatra, Brel, and Aznavour of Arabic music

Montreal singer Nidal Ibourk is passionately in love with a musical genre that Westerners should know better, and learn to love too!

The Festival du monde arabe (FMA) presents the concert Au royaume du tarab on November 29, as part of its 2020 online edition. Meet Montreal singer Nidal Ibourk, wh’s passionately in love with a musical genre that Westerners should know better, and learn to love too!

Nidal Ibourk: Tarab is an Arabic word meaning “ecstasy”. Basically, it’s a style of Arabic music that conjures a sense of emotional power. In reality, almost every traditional Arabic music, be it more intellectual or classical, and popular, is tarab. So, you could say that every music written and played before, say, the 1980s, is part of the great tarab tradition.

PAN M 360:  Who are the main performers of this style?

NI: Some great names are fundamental in the repertoire: Oum Kalthoum, the great Egyptian singer from the golden age of tarab; Mohammed Abdel Wahab, nicknamed the Stravinsky of Arabic music; and Fairouz, maybe the best known Arabic artist of this era in the West. I’d say that we should also consider Farid el Atrache as one of the most important musicians of tarab.

PAN M 360: Can we make links with Western music? What kind of well-known artist here is comparable, in terms of importance, to these artists in the Arab world?

NI: Well, think of Frank Sinatra. Or, on the French side, think of Jacques Brel and Charles Aznavour. Tarab is not to be compared to classical music, like that of Mozart or Beethoven, but rather with a kind of popular music coloured by a classical drapery, with large and generous orchestrations, very romantic and delivered in a powerful emotional expression.

PAN M 360:  Is the tarab a single style throughout the Arab countries?

NI: There are huge differences! Moroccans don’t do tarab like Lebanese, which do it differently than Egyptians, Syrians, or Algerians. Let’s compare, once more, with Western music. Take Sinatra against Brel or Aznavour. There is a similar spirit, but in the details, they are worlds apart.

PAN M 360:  Does the younger generation like this music?

NI: It’s difficult. They may have respect for it, because they know it’s part of their cultural roots, but they don’t really listen to it. Other music absorbs all their attention now, like pop, hip-hop, rock, etc. But it’s a worldwide phenomenon. In Europe and North America, classical music, folk traditions, and other rooted musical expressions are more or less relegated to marginality.

PAN M 360: Tell me about the November 29 concert, part of the Festival du monde arabe (FMA) – what does the program consist of?

NI: The program of the concert is focused on songs of the great masculine voices of tarab tradition. So, you’ll hear pieces from Abdel Wahab, El Atrache, and many others. I will perform with a very good Montreal singer named Wassim Kamar, and also with an orchestra made up of the best Montreal artists that can play tarab instrumental accompaniment. There are good musicians here. That being said, I would like to have more opportunities to play and perform this music in Montreal. The FMA does a great job, and other organisations also, but there should be more concerts all year long, and more venues programming Arabic music. I would like to play a role in the blossoming of this wonderful tradition here, after COVID.

PAN M 360:  Would you like to make your living from this art?

NI: Of course! But one has to remain reasonable. It is hardly feasible in normal time, even more now! I must say I consider myself very happy to have my job of Graduate Program Coordinator at McGill! I know many friends in music for whom times are very hard.

PAN M 360: Well, we wish you the greatest success, for the 29th and for the future as well!