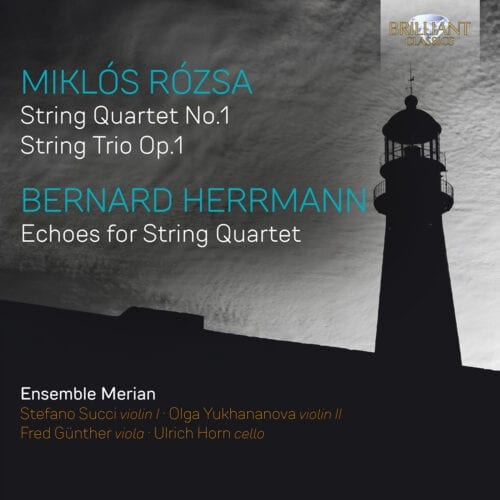 One of the most positive consequences of the rise of film music in concert halls and in the regular canon of Western classical music is the parallel rise of composers closely associated with this music, and especially their “concert” works. Here are three fine examples. The Quartet and Trio by Miklós Rózsa (Ben-Hur, Spellbound, Quo Vadis?, The Lost Weekend, King of Kings, etc.) are bathed in atmospheres that are reminiscent of certain Hollywood pages, but darker and woven in textures and colors that evoke the late romanticism of Barber or Copland, and sometimes even a touch of Bartok’s modernism. Echoes for String Quartet by Bernard Herrmann (Psycho, Vertigo, North by Northwest, etc.) is an even more interesting work: composed at the end of the composer’s life, after two particularly depressing personal failures, the departure of his wife and the rejection of his music for Torn Curtain by Hitchcock. He would never again write for his favorite collaborator, which left him in a particularly dark state of mind. While Echoes is not a faithful, wall-to-wall translation of that darkness, it is shot through with dramatic fluids that betray that psychological haze. But more than that, the twenty-minute-long quartet is a brilliant synthesis of Herrmann’s language across a few decades of Hollywood life (yes, here and there are some ”echoes” of Psycho!). The last bars are particularly poignant, made of etiolated sounds, disappearing like steam in the wind, like the genius of this original creator, slowly fading into oblivion in an industry that was beginning to look elsewhere. The Ensemble Merian (made up of musicians from Frankfurt’s orchestras) is excellent but above all promised to other explorations of the genre, as they say they want to devote themselves to the concert repertoire of the great film composers. We’ll be on the lookout for more gems like this in the future!